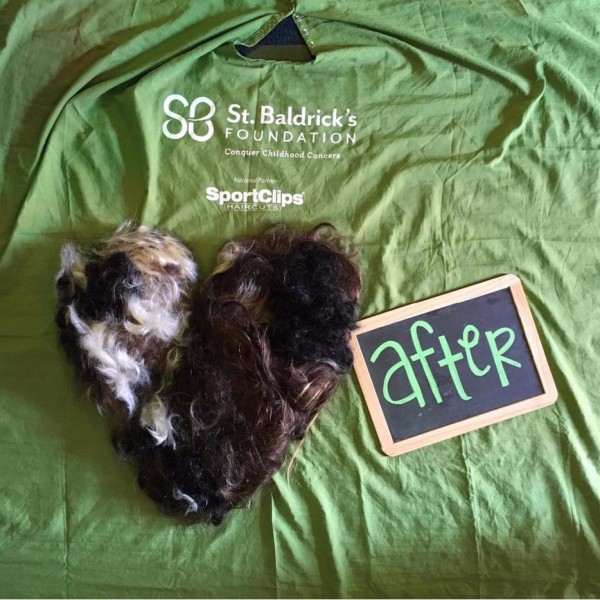 Roc the Bald for Brave Children

Roc the Bald for Brave Children

This year we had our event in September (Childhood Cancer Awareness Month) for St Baldrick's Foundation and there were a lot of obstacles/issues that happened with the event.
Our event has been held at the same location for many years and the venue was closing so that was not an option for the event.
We had the event at a location that was located outside so that it would be safer covid wise but that was rough because this is Rochester and you never know what the weather will be. Thankfully it was a pavilion and able to have everything located under the pavilion since it was pouring rain.
Eight heads were officially shaved yesterday at the event and some others have shaved independently by our dedicated barbers that have been doing the event for many years--Donna has been nine years; Melissa has been nine year; Heather has been seven years and Missy has been 7 years so really appreciate this group of dedicated individuals. Sorry that the event did not keep our barbers busy and allow more heads to be shaved but their dedication is appreciated.
Added some water and pop/soda along with snack foods since our event was not held at a venue that provided or allowed that. Thanks to Walmart there was plenty of water and snacks donated for the event and not a huge amount but raised $72.00. Sent some snacks back with one or two of the volunteers that were college students and donated the remainder to Camp Good Days and Special Times that does a lot of programs for children and families dealing with cancer.
Majority of the participants have been doing the event for many years so sadly there were not a lot of new blood and hard to work on this with covid. But really need to figure out a way to get more people involved and not just people that have been doing the event for many years--there were 38 participants registered for the event and one walk-in (add on shavee) so there will be 39 participants. Definitely the majority of the participants have been doing the event for a while since thirty-one were league heroes which is great but to grow each year there is a definite need for new blood.
Added a band (The Sandra Naro Band) that was great and had hoped that this would bring new people but the band had played the night before so did not see a lot of turn-out for the band. However, the band was a nice addition and added something new to the event.
Had the advantage of a bagpiper from Gates Keystone Club Police Pipes and Drums whose son is a childhood cancer survivor. Since our event was September 12, 2021 that was a rough day for the band since there were so many events and parades the previous day.
Had the clowns there as well from Grease Paint Alley Clowns and there are many of those individuals that have been doing the event since I started to organize the event in 2008. Guess that they are in the League of Legendary Heroes as well unofficially.
Had the unicorn mascot from Mascots United and the mascot for the local lacrosse team (Fast Break Fury) in Rochester New York.
Large basket raffle was held and that is a lot of work for those that do this and wish that there were more people able to bid on the silent auction or purchase raffle tickets. However, considering the low attendance, the auction, raffle and 50/50 raffle raised over $648.00 for the event total.
One of our honored families was able to attend and that is the reason that this event occurs so it was great to have them in attendance.
Considering issues with a new location, covid-19 and Buffalo Bills game hope that everyone that attended had a good time and that the money raised for childhood cancer research will make a differnece.
Remember that you can continue to raise money throughout the end of the year so hopefully our total amount raised will continue to increase.
B I