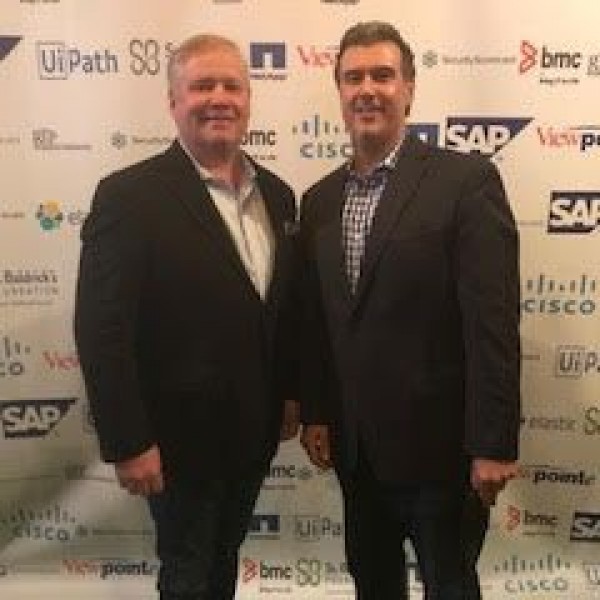 At: Virtual - See "Event Details" below for link

1 in 5 children diagnosed with cancer will not survive. You can help fund research that will Give Kids a Lifetime.

In the fall of 2006, Tom Mendoza and I hosted a CIO dinner at Tira Signo on Bleeker Street in NYC.  We were joined by ten esteemed guests and execs, including John Lacava (then COO of QBE, now CEO of Aran Insurance) for an intimate event. John dared NetApp former executive Joey Santamorena (Now VP Americas Commercial - Security Scorecard) to join in shaving his head in support of St. Baldrick's and its esteemed mission to support Childhood Cancer research.  Then, the attention quickly turned to me. I happily obliged the taunt and proclaimed that shaving my head would be something I would gladly do, but it would have to be a much grander scale than just a few of us participating for me to accept the challenge. That was the night “Bill and Joey’s Excellent Shaving Adventure” was born and subsequently came to fruition just a few months after we learned about St. Baldrick’s.
Support for our cause built quickly with my colleagues at the time- NetApp Execs Eric Mann, Sr. VP of Americas Sales, and EVP Rob Salmon attended and supported the premiere “Excellent Shaving Adventure” event in NYC. Neither had any intention of shaving their locks when walking into the room, but both left without a hair on their head when they exited the building. Eric’s spontaneous and admirable decision raised 25k on the spot when he, with his wife’s blessing, took a seat in front of one of the volunteer barbers. Inspired by all of the events, Rob, after sharing an emotional story of a friend who was losing the battle with cancer, committed 10k, grabbed the clippers, and started shaving his own head. The impact of this event was on full display even in year one.
I wish I had the space to call out every person who has made a difference through their participation with St. Baldrick’s. All of my esteemed colleagues through the years: NetApp, Security Scorecard, Fortinet, SAP, BMC, UIPath, Varonis, Viewpointe, Elastic, and so many of their employees, leaders, customers, partners, families, and friends; We all stand together on behalf of the kids battling this terrible disease. Twelve years later, we stand at thousands of shavees and volunteers and more than $7,000,000 donated. Thank you to you all!
Because of leaders like Tina Ashamalla and her efforts at SAP, Chris Lynch and his efforts in Boston, George Ballantoni from BMC, Ryan McGinty at Elastic, Roger Anderson at Cohesity, Rob Benoit and Brian Mooney at NetApp, Berk Mesta at Viewpointe, Eric Mann at Mainline, Jim Klein and Kevin Carney at Fortinet, Two Time SuperBowl Champ, and Giants great Justin Tuck and of course Joey Santamorena and myself at Security Scorecard,  a path has been pioneered for more individuals and companies to get behind this cause.  We can’t forget Vito Guiliani, the former Chief Procurement Officer, ADP (now same role for Thoma Bravo), with his remarkable shearing tallying donations of $95K!  And last but certainly not least, we have a fresh group of St Agnes CYO Basketball and Rockville Centre Soccer Club Players joining us over the years, inspiring so many.  They are taking the torch lit by my son Liam and his friends fifteen years ago to participate in this mission. These youngsters inspire many to follow their lead, and hopefully, their support will exponentially lift results, even beyond what we have accomplished thus far!
Cancer is among the worst of words in any language.  It's even more heartbreaking when it's spoken of a child.
Since 2007, I have had the pleasure and honor to participate in one-hundred fifteen + St. Baldrick's events around the world.  While I'm proud of the approaching $8 million dollars, these events have raised for childhood cancer research. I’m just as proud of the countless other events that started as spin-offs from Bill and Joey's Excellent Shaving Adventure (the name alone tells you how long we have been supporting this battle against cancer!)
In 2007, the morning after the first NetApp St. Baldrick's event in NYC, my 9-year-old son Liam – who had participated - burst into tears, pleading to stay home from school that day.  Liam woke up to meet the reality that he might be teased at school for having a shaved head, a heavy burden for a 9-year-old. My wife Kate and I were prepared for this reaction. How lucky we were that shaving our heads was an option for us, rather than an all-but-certain side-effect on top of having to fight for your life. Liam pulled it together and stood a little taller that day as he walked out the door on his way to school. His and his friends' efforts had a contagious effect.  They inspired over 60 kids to show up to the next local event, which has since grown to become a Top St. Baldrick's fundraiser.
15  years later, friends from my NetApp days, many of who have spread their wings across the industry, are still committed to raising funds for the cause, and other industry leaders have joined them, inspiring the #TechConquersKidsCancer movement in support of the cause. Security Scorecard has become an official sponsor and partner of St Baldricks, and many Scorecarders come out each year to shave their heads for the charity. The impact goes beyond the funds raised: these events remind attendees just how lucky those of us who aren't fighting cancer truly is. We learn to cherish moments together.
We all stand together on behalf of kids battling this terrible disease. Twelve years later, we stand with thousands of shavees and volunteers, and the funds raised have been tremendously impactful. Thank you to any and everyone who has helped and supported us as we head into our second decade supporting the fight against childhood cancer.
Again, my heartfelt thanks to each and every one of you!
Bill Hogan
CRO, SecurityScorecard
St. Baldrick's Knight and Commander
Former Board Member and Forever Ambassador
B I