Why Wario Shaved at the 46 Mommas Shave for the Brave

St. Baldrick’s volunteers show their support for kids with cancer in fun ways! You can, too. Get involved.

Kris and her son Will dressed up as video game characters Wario and Waluigi.

Why dress up as Wario when I shaved with my fellow 46 Mommas?

Although not many people asked me outright, I could see the question in their eyes. I’m sure they probably thought I was a video game fanatic.

The truth is, I don’t play video games all that well. But my son does. 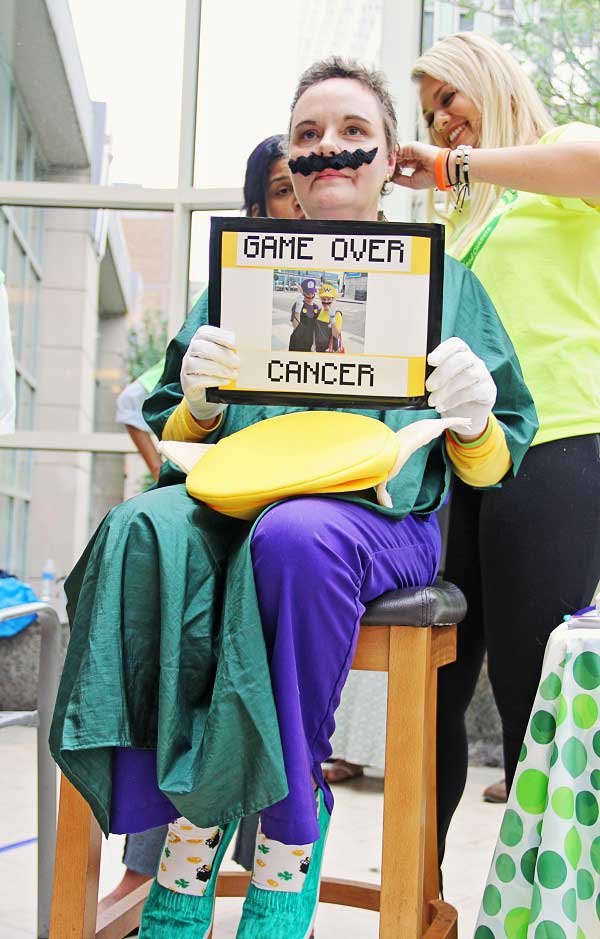 Kris getting her head shaved at the 46 Mommas Shave for the Brave.

Nearly 12 years ago, the day before the doctor told us our son Will had cancer, my son was in the ICU hooked up to a ventilator. Because he was 4 years old, they tied his arms to the side so he wouldn’t pull the breathing tube out.

He didn’t understand what was going on and was completely terrified. He just looked at me with wild eyes and I was powerless to do anything but try my best to comfort him.

I was sure he was wondering why I wasn’t protecting him, and my arms ached from wanting to pick him up and hold him close — just like those moments right after I gave birth to him.

We had our older son’s small, handheld Gameboy device with us. We asked the nurse if he could play it for a little bit, just to give him a break from being strapped down. She was skeptical, but in the end she allowed us to give it a try.

We thought Will was far too young to play video games frequently, so being able to take a turn with his brother’s Gameboy was always a special treat. This time was no exception.

There he was, lying in a bed in the ICU hooked up to a ventilator, quietly playing his little heart out. His eyes shined with excitement!

I wanted to cry in that moment, because even though my son’s fragile body was recovering from the trauma of lung surgery and he was hooked up to machine to help him breathe, he was almost instantly transformed into a something of a superhero.

Courtesy of the game he clutched tightly in his little hands, he could run and jump and twirl around. He could climb and fall and get back up. He could break though the walls of that hospital room and fly free with a sense of joy and wild abandon every 4-year-old child should be afforded.

They allowed him to remain unrestrained for the rest of the day and into the night. It was such a relief to me that he was on the road to recovery and that soon we would be far away from hospital rooms and machines that were designed to help keep people alive.

Only that wasn’t meant to be.

The very next day we were ushered into a conference room down the hall and told our little boy had cancer. We were told his childhood cancer was rare and deadly and he was in for the fight of his life.

I cannot fully explain to you the fear and terror contained in those moments there in the conference room. The deals I wanted to make with God. The anger I felt at the world. The rage I felt at a disease that should never have been able to touch any child, much less my own.

I can only say that the path before us became uncertain. Everything we learned about parenting went flying out the window and we grasped at anything that might provide peace and promote healing. 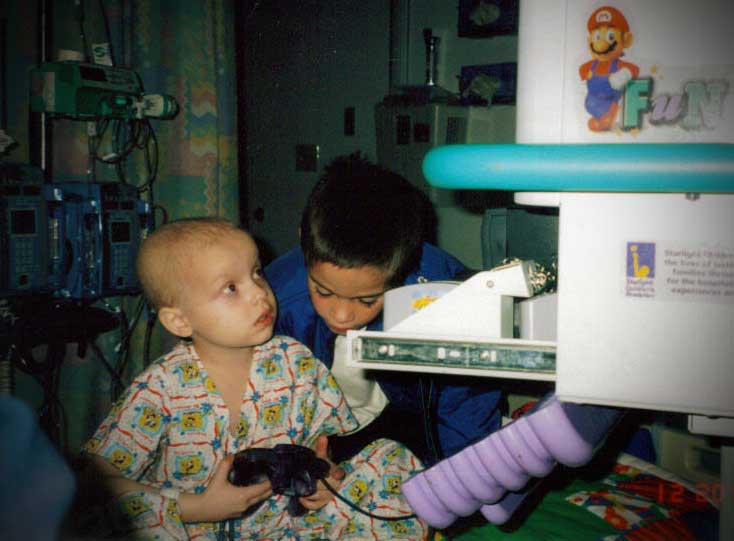 William playing a video game while he was in treatment for childhood cancer.

One of those things we learned to embrace was video games. In almost every picture of my son in the hospital during his chemotherapy treatments, you can clearly see a video game console basking in the forefront or lurking in the background.

And somewhere alongside that game console, you see a little boy with a fierce look of determination on his face, because he was going to do everything in his power to win that game.

So, nearly 12 years later, when I stood alongside my fellow Mommas wearing my silly Wario costume, it was in large part to honor the fight that began in earnest for my son that day in the ICU.

But even more so, it was in show of support to all of the young warriors touched by childhood cancer and to illustrate that I will not stop fighting on their behalf until the day we can all stand together, lift our voices, and yell from the rooftops of children’s cancer hospitals everywhere:

Join the fight to end childhood cancer. Be a shavee.

Be a Shavee
Organize an Event