What Is Langerhans Cell Histiocytosis? 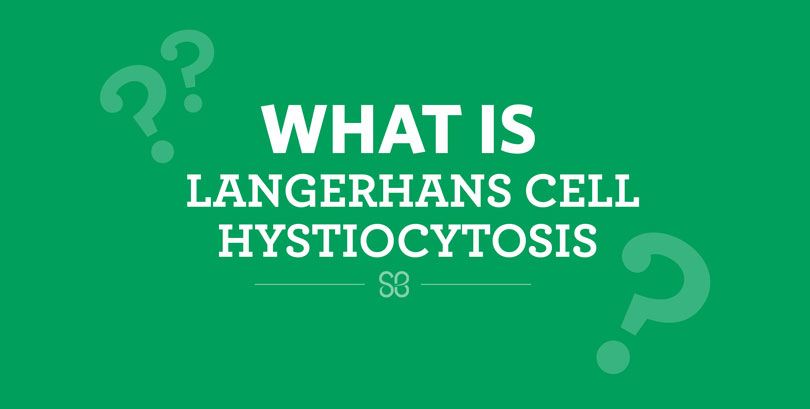 Dr. Carlos Rodriguez-Galindo is a St. Baldrick’s researcher at St. Jude Children’s Research Hospital and a member of the St. Baldrick’s Scientific Advisory Committee. He explains what Langerhans cell histiocytosis is, how it’s diagnosed and treated, and how research is helping kids and adults with this disease.

What is Langerhans cell histiocytosis?

A Langerhans cell is a type of white blood cell that normally helps the body fight off infection. In LCH, the body produces too many of these cells. The cells build up in the body, sometimes damaging organs or forming tumors.

The disease has a variety of different forms, ranging from mild to aggressive. It is most often diagnosed in young infants, but can also present in children and adults.

Learn more about cancer in babies >

LCH is not contagious, and we do not believe it is hereditary. We are still figuring out what causes LCH and why it behaves in so many different ways.

We need your help to find the best treatments for kids with cancer. Donate now to help them grow up and live long, healthy lives >

Until about five years ago, there have been serious debates about this in the medical community. Some called it cancer and others called it a “reactive inflammatory disorder,” saying LCH was a reaction to viruses or other infections that stimulated the immune system. The reason for the doubt was mainly because LCH varies so much — some patients need aggressive chemotherapy while others don’t need any treatment at all.

But we now have more advanced genetic sequencing capabilities and we see that LCH cells have genetic alterations that are typical of cancer cells. So, we can say with a fair degree of certainty that LCH is a type of cancer.

What are the signs and symptoms of Langerhans cell histiocytosis?

The signs and symptoms of LCH depend on the patient’s age and the part of the body affected. The areas of the body most affected include:

LCH tends to affect babies’ skin. It can appear on the scalp as a rash that looks like cradle cap, or as heavy eczema in the diaper area, armpits, or all over the body.

In children younger than 2 with a very advanced stage of the disease, the symptoms may be similar to leukemia, with fevers, low blood counts, and an enlarged liver and spleen.

In children 4-5 years old, it’s common to see bone lesions in the skull. They look like bumps and can be painful. Some children may also have chronic ear infections.

In adults, especially older women, we usually see milder symptoms, such as small bone lesions and chronic inflammation of the skin. Smokers can also contract pulmonary LCH, which is limited to the lungs. 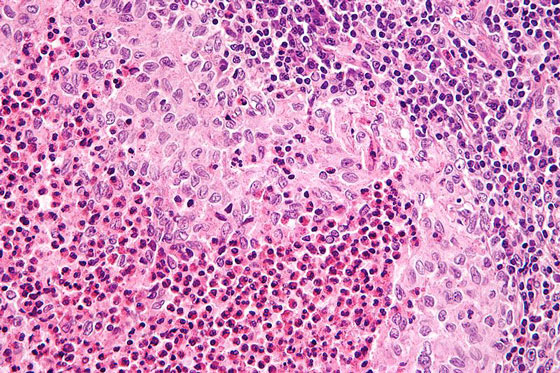 LCH under a microscope. Photo via Wikimedia Commons.

How is Langerhans cell histiocytosis diagnosed?

LCH is diagnosed with a biopsy of the affected area.

Yes, LCH is curable, and survival rates are high. LCH and its treatment can lead to complications, so we recommend close follow-up of LCH survivors to track any problems with development or hormones.

What treatment options are available for patients with Langerhans cell histiocytosis?

Treatment of LCH varies greatly and depends on the severity of the individual case.

If the affected area is a single site, like a lesion or a rash, it can be treated with minimal therapy — for example, a topical steroid injected into the lesion, or a cream applied to the skin.

If the patient has more than one lesion or affected area, or a bone lesion in the skull (where it can cause damage to the central nervous system), we recommend a mild chemotherapy treatment. Treatment lasts for six months to a year and resolves the majority of cases.

Very young children (under age 2) tend to have the most aggressive form of LCH. This usually requires intensive treatment similar to the treatment for pediatric acute myeloid leukemia. It typically involves high doses of inpatient chemotherapy, sometimes followed by a bone marrow transplant.

How is research helping kids with Langerhans cell histiocytosis?

We now know that one-half to two-thirds of LCH patients have mutations in the BRAF gene. In adults, we’ve seen success with a new oral treatment that targets this gene.

Because this type of treatment is so new, we still don’t know a lot about its long-term impact on patients. Clinical trials are currently going on to assess the use of this new treatment for LCH in children.

Together we can take childhood back from cancer. Give today.