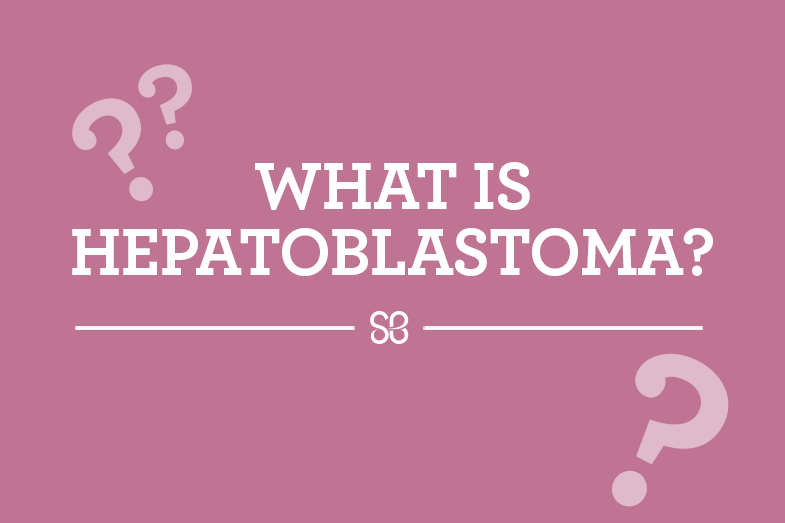 Dr. Edward Prochownik is a past St. Baldrick’s Research Grant recipient and is The Paul C. Gaffney Professor of Pediatrics and Professor of Microbiology & Molecular Genetics at Children’s Hospital of Pittsburgh. In this blog post, he answers the question “What Is Hepatoblastoma,” and shares some other information about the cancer, its treatment, prevalence, and why research is so important.

Hepatoblastoma most likely originates in cells that are present in the fetal liver but gradually disappear after birth, thus accounting for its association with infants and young children. In the normal liver, these cells differentiate into so-called hepatocytes, which form the bulk of the liver’s cellular content and serve important roles in metabolism, detoxification and the biosynthesis of important serum proteins, including some of those involved in blood clotting

Pathologists have sub-classified hepatoblastoma into seven distinct sub-categories based on their microscopic appearance and expression of certain “markers” that are made by and confined to the tumor cell or released into the blood. Sub-classification is an important part of the evaluation process of hepatoblastoma as certain sub-types are associated with better or worse outcomes.

The cause of hepatoblastoma is thought to be due to the mutation of a single gene known as beta-catenin, which plays a role in normal liver cell growth and differentiation. Beta-catenin mutations have been identified in about 80% of children with hepatoblastoma. Other patients, without beta-catenin mutations, have abnormalities in other genes that affect beta-catenin’s behavior and cause it to act like a mutant. A variety of other gene abnormalities have been detected as well, although these are more variable and occur at much lower frequencies. 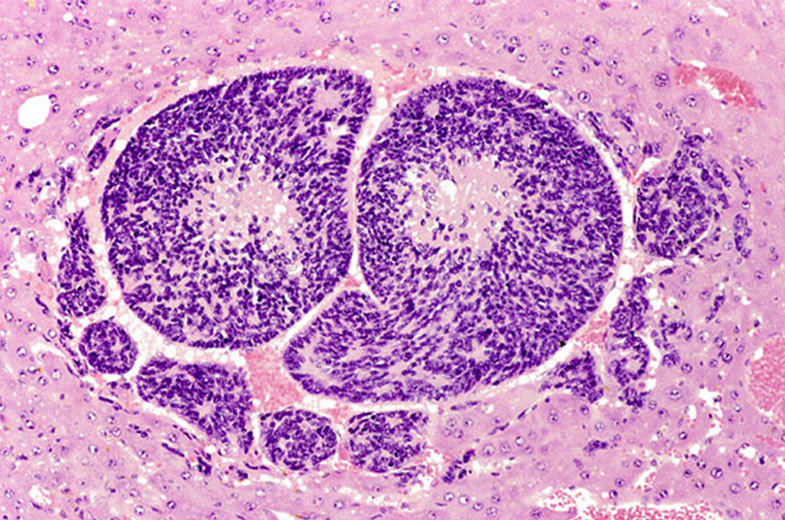 What are the Signs and Symptoms of Hepatoblastoma?

Children with hepatoblastoma often appear well at the time of diagnosis. Parents may routinely report a swollen abdomen that is noticed during diaper changes or baths. In other cases, primary care providers may observe a distended abdomen and a mass during routine well-child exams. Other symptoms such as vomiting, abdominal pain and fever are seen with many other common childhood diseases and can lead to a misdiagnosis or a delay.

How is Hepatoblastoma Diagnosed?

The presence of an abdominal mass can be rapidly confirmed by an ultrasound exam and is almost always followed by a CT or MRI scan. Certain blood tests can raise the suspicion that hepatoblastoma is present. Ultimately, the final diagnosis of hepatoblastoma is made by biopsy and microscopic examination by a trained pathologist.

How is Hepatoblastoma Treated? What are the Side Effects of Treatment?

The primary treatment for hepatoblastoma is complete surgical removal of the tumor. In patients with small tumors and low stage disease, i.e. that which has not spread beyond the liver (metastasized), surgery alone may be curative. In other cases, post-surgical chemotherapy may be given in order to ensure that any remaining tumor cells are eradicated. When the tumor is thought to be too difficult to surgically remove completely or safely, a short course of pre-surgery chemotherapy may be administered to shrink the tumor and allow for its easier and more complete removal.

A number of different drugs have been used to treat hepatoblastoma in a variety of combinations. Side effects of these drugs include short-term ones such as nausea and vomiting and bone marrow suppression which can cause anemia, bruising and susceptibility to infections. Long-term complications can include hearing loss and heart and kidney damage.

How Many Children are Diagnosed Each Year?

Approximately 100-200 new cases of hepatoblastoma are diagnosed in the United states each year.

What is the Survival Rate or Cure Rate?

The overall long-term survival rate for hepatoblastoma is about 70% but is highly dependent on the stage at the time of diagnosis. Those with small tumors confined to the liver tend to fare much better than those with advanced stage disease and metastases.

How is Research Helping Kids with Hepatoblastoma?

New drugs and combinations are constantly being tested for the treatment of hepatoblastoma and other childhood cancers. Because even the most common forms of cancer in children are relatively rare, the testing of these drugs typically involves the cooperation of multiple children’s hospitals across the country. This allows for the accrual of as many patients as possible so that results of ongoing therapeutic trials can be evaluated rapidly and accurately. Most large children’s hospitals participate in these group studies meaning that children with hepatoblastoma are likely to be treated very similarly if not identically regardless of where they are seen.

Recent advances in understanding the different gene mutations and gene expression patterns associated with hepatoblastoma are allowing pathologists to better classify tumors than is afforded by microscopic examination alone. These types of advances allow physicians to determine, before any therapy is started, how well patients are likely to respond to any proposed chemotherapy. Such knowledge can potentially allow less-toxic therapies to be used for those individuals with the best prognosis.

How has the St. Baldrick’s Foundation Made a Difference in Your Research?

Our own research has involved studying how different beta-catenin mutants affect the growth of hepatoblastoma. We have used a model in which delivery of different patient-derived beta-catenin mutations to the liver leads to the appearance of tumors indistinguishable from those seen in humans. We have found some beta-catenin mutations to induce the growth of rapid and aggressive tumors whereas others are associated with slower tumor growth and longer survival. The pathologic sub-type of these resulting tumors also differs among the different mutants as to the gene expression profiles and metabolic behaviors. This suggests that prior knowledge of the type of beta-catenin mutation in a patient’s tumor might allow physician’s to better tailor the type and/or duration of chemotherapy. The St. Baldrick’s Foundation has funded much of this research.