What I Wish You Would Ask Your Elected Officials

This week, the childhood cancer community is joining together and sending a message to Congress — Step Up: More Funding for Childhood Cancer Research. Add your voice and tweet your members of Congress through SoundOff.

Susan and her son, David.

One of the greatest joys of parenting is watching your child develop and master new things. From stacking blocks, learning colors, and beginning to read, to driving a car and casting their first vote — each milestone is a celebration.

Election days were awesome in the Heard house. There was spirited conversation and a sense of citizenship as we walked to the booth down the block. We would discuss the candidates with our kids and educate them on our values and voting choices. By age 7, our son, David, was well-versed in many issues, and when he came to the voting booth he pressed the buttons and voted for me.

And then cancer came into our lives when David was 8. Voting was one of many normal activities that was put on hold.

Those were some of the lowest moments in my life.

By the time David ran out of treatment options, we talked a lot about why he was dying. Cancer, in its simplest form, is just cells that grow out of control.  Chemotherapy, radiation, surgery, immunotherapy, and other treatments exist to kill those cells and allow a child to live a normal life.

We didn’t get back to normal life, and David wondered often why there wasn’t a treatment to fix him, which forced me to look more closely at the problem of funding for childhood cancer research. 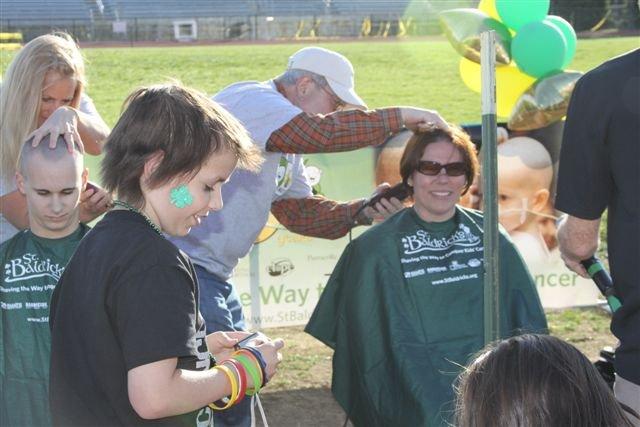 David at a St. Baldrick’s head-shaving event. Despite the efforts of private charities to fill the funding gap, childhood cancer research remains underfunded.

When I told David that less than four percent of the National Cancer Institute’s budget was spent on all childhood cancers, we were both shocked. He asked how we could fix this terrible injustice, “Aren’t children our future? How can we not invest in this health crisis at the governmental level?  Why does it seem like our elected officials don’t care about kids?”

So while David was home on hospice care and we had such amazing talks about so many topics, he created his list of things for me to work on after he died, which included raising funds for the researchers who wanted to fix the problem of childhood cancer.

At 10 years old, this was David’s dying hope — that other children would not suffer and die like he was going to.

So on David’s behalf, and on behalf of the thousands of children and families suffering with childhood cancer, please ask your elected officials some important questions:

We are fortunate enough to live in one of the wealthiest nations in the world, yet my son looked me in the eyes and told me that nobody cares about kids like him and that is why he was dying. I refuse to let that be the truth I take to my own grave.

Our elected officials need to know my David’s story and the story of so many families; they need to know that we are not going away. Funding childhood cancer research must become part of the conversation in Washington so that every child can grow up and lead a long and healthy life.

Use SoundOff and tweet to your elected officials or send a letter — together we will be heard.