What Happens When “Do What You Want” Becomes “Ladies’ Night” for 800 Women?

It started as a lot of St. Baldrick’s Foundation events do: a few people getting together at the local spot to shave heads and help raise money for pediatric cancer research. After seeing volunteers participate, Terry Binkely-Paterno wanted to get involved in a different way.

And for very good reason, as her nephew, Aiden, had been diagnosed with rhabdomyosarcoma in July of 2008. Wanting to take action, Terry and her mothers’ group – the Wednesday Mothers Club – decided to host a bake sale and contribute the proceeds. 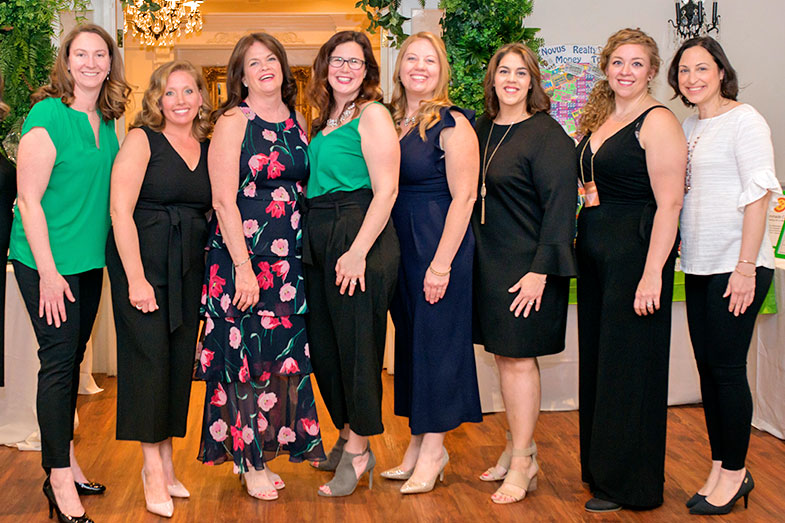 Terry (third from left) and other Ladies’ Night committee members.

The group sold out of the cupcakes at that first event – raising $1,000 in just three hours. Motivated by the support of their community in Floral Park, NY, this talented group of women continued to think of other ways to fundraise. The next year they included a silent auction that raised more money, and saw the potential of a night out with dinner, drinks and dancing – a Ladies Night was set into motion.

This momentum continued in the years that followed – and though Aiden passed away in 2010, the movement created in his honor continues to this day.

St. Baldrick’s created the “Do What You Want” program because, let’s face it, not everyone wants to shave their heads. These types of fundraisers allow the volunteer to raise funds in a variety of forms – with Ladies Night leading the way as an example in the “Celebration” category.

Terry says that the freedom to Do What You Want led the women’s group down the path of empowerment – to do something that was just for women. “The first few events we witnessed were head shaves, and were very guy-focused,” Terry said. “So while we were able to add value by raffling off gift baskets of things like New York Jets tickets, we really wanted to do something for the women exclusively.”

“Our first women-focused events were just offshoots of the Wednesday Mothers Club, and we raised $13,000 the first year, then $26,000 the next. We loved the venue [the Trinity Bar and Restaurant], but we started to toy with the idea of really blowing it out. We knew we’d need a bigger venue, and there was a ton of interest in the community.”

They moved their fundraiser to a new location, gave it more of an elevated feel – and raised $55,000 in 2017. By the following year, the fundraiser was so well known there was a waitlist and they outgrew the 200-person venue. Needing to move to yet a bigger place – the Inn at New Hyde Park – they went on to raise more than $146,000 in 2018. In 2019, Ladies Night sold out within the first hour, ultimately raising a whopping $201,403.55, becoming one of the top fundraisers since the program’s inception.

It Takes Teamwork to Make the Dream Work

If you want to create your own celebration fundraiser like Terry’s, she highly recommends a team approach. “We brought together a team of different ladies with different strengths, and we work together very well. We also get local businesses heavily involved, and we are very committed to helping create a world without pediatric cancer.”

Getting big sponsors involved helped, too: Northwell Health and Clare Rose were both instrumental, according to Terry, and she suggests finding companies in your community that want to give back.

But this group was also not afraid of starting small.

“Remember, we began with just cupcakes – and Aiden’s legacy kept us moving toward making it a bigger and better event each year. We know that he would have been proud to see what we have done in his memory – just a group of women, working hard to create an event with tremendous impact.”

do what you want DWYW Ladies' Night rhabdomyosarcoma