What Happens When A Pediatric Cancer Survivor Grows Up to Be a Pediatric Oncologist?

When you’re a kid with cancer, you’re not thinking about long-term impacts of treatment: you just want to get better. Parents, too, are rightly focused on a desire to put cancer behind the family and get on with life.

While some childhood cancers still have no cure, overall survival rates have climbed into a figure that’s around 80%, so more attention is being paid to those long-term impacts. What if the treatment you get today can lead to all sorts of unwanted side effects later? And, if you survive as a child, as you move into adolescence and then adulthood, what can be done to ensure you have the best possible quality of life?

Dr. John Gates, a survivor now in his 40s, has worked tirelessly to help treat kids with cancer, and to ensure that those who do survive know how to face future challenges head on. 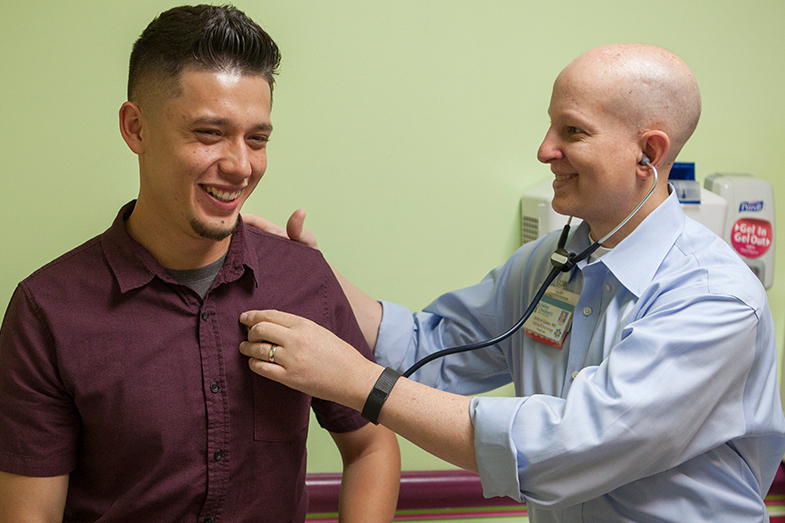 It’s a harrowing enough tale to get cancer as a five-year-old. How about a recurrence at age 9, and then again at age 14? That’s what happened to Dr. Gates. A stem cell transplant the last time around was what did the trick, and he has been in remission since.

He used this life experience to his benefit, as he first pursued a scientific path in school and, eventually, became a pediatric oncologist. He now leads the multidisciplinary childhood cancer survivors program at Valley Children’s Hospital in Fresno, California.

His own survivorship story shows that treating the whole patient, and being prepared for a variety of challenges – some physical and potentially life-threatening, some of them educational, some psychological – is vital to ensure the best possible quality of life.

After his stem cell transplant and remission at age 14, Dr. Gates put his head down and kept his eyes on the work ahead.

“I went back to high school and didn’t want to fall behind, so I was focused on my studies. But I know that some teachers would have cut me some slack if I needed it.” That slack, though, isn’t something that Dr. Gates recommends. “With some of my patients, I do see that teachers and counselors might have a tougher time understanding what cancer patients are going through.

“For some kids that don’t have serious cognitive defects, the tendency to ‘cut the cancer patient a break’ might do more harm than good.” Other children may have more substantial issues with executive functioning, or learning disabilities that need further, individualized care. Having a liaison at the school that works specifically with cancer patients is one recommended path for caregivers and schools to consider.

Another lesson that Dr. Gates has learned through the years is the importance of the right resources and a guiding hand. “Now, I realize that, while I was driven to a career in medicine, other cancer survivors might not be college-bound. And that’s okay. Especially with students in high school, exposure to a variety of options is really the way to go.” Some students may still be college-bound after surviving cancer, while others may find themselves looking in the direction of vocational school, or developing a trade.

Still others might not be prepared for the cognitive slippage that can be caused by some treatment. “Here’s where 504 plans, and Individualized Education Programs (IEPs) can come into play. Some parents aren’t even aware of these as an option for their children as they survive cancer.”

These sorts of programs can help provide resources that can help these students become functioning adults.

“I’ve had patients decide that they want to become chefs – so they go to culinary school, and we help them with business courses, too, in case they find themselves wanting to run a restaurant.”

Side Effects Might Have Led This Doctor to Work With Survivors

Although Dr. Gates can’t pinpoint one reason that he chose a medical career, and pediatric oncology and survivorship specifically, he does think that seeing the side effects of his treatments as a kid may have played a role.

“I did an oncology fellowship early on, and I thought there might be a way to use my experience so that future populations didn’t have to go through what I went through.” Survivors, he said, often didn’t have knowledge of side effects of treatment, and weren’t prepared for things like potential cognitive deficits. The survivorship program now led by Dr. Gates helps survivors to navigate these issues, and to be armed with an understanding of the potentially serious health risks they may face, so they can be proactive about living their best lives.

He has also seen growth in understanding of late effects of cancer treatment. “Doctors know what to check and how to check it. They can specifically say ‘if you get radiation, you may be at risk for skin cancer, let’s do annual checks.’” This is one such late effect that Dr. Gates experienced himself, a basal cell carcinoma that needed to be removed, and an annual skin check routine that is part of his calendar.

One of the side effects of his radiation treatment years ago is a form of alopecia (a condition which causes hair loss), so shaving his head is out of the question. However, Dr. Gates says, “we have been supporters of what St. Baldrick’s does for years, and what they’re doing to raise awareness about survivorship during the month of June is outstanding.”