Luke is blazing a trail with no roadmap. Now 12 years old, he’s been fighting high-risk neuroblastoma since he was 5, with three relapses. He’s constantly relying on the kind of cutting-edge research you support through St. Baldrick’s to find the next new treatment – the one that will make him cancer-free for good. 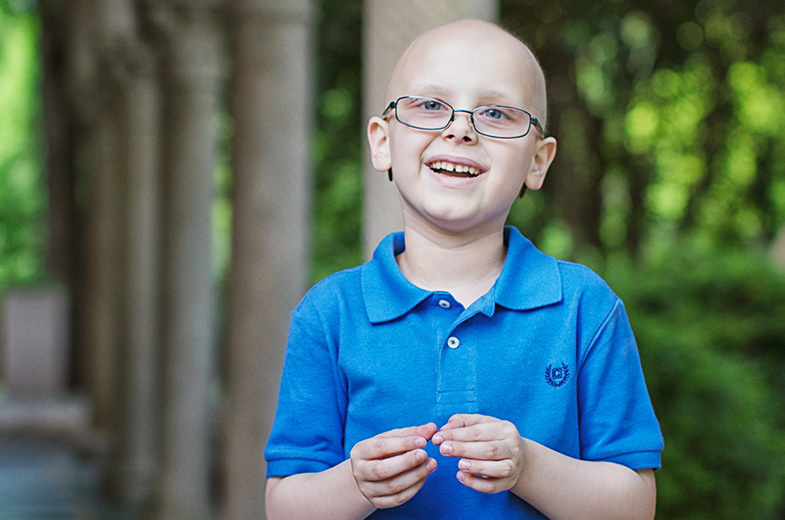 No standard treatment protocol exists for a kid who’s relapsed that many times, says Luke’s dad, Jason: “You can never get comfortable when fighting neuroblastoma. This is a very relentless type of cancer.”

Luke’s family’s cancer journey began seven years ago, when Luke was diagnosed just before Halloween. When the 5-year-old complained of severe pain in his abdomen, his mom, Janelle, rushed Luke to the hospital. Within hours, doctors diagnosed neuroblastoma, a pediatric cancer that causes solid tumors throughout the body. Doctors told Jason and Janelle that their son had a 50% chance of living five years.

Since then, Luke has undergone cancer treatments including chemotherapy, surgery, stem cell transplants and a revolutionary immunotherapy called Unituxin, an outcome of research by St. Baldrick’s-funded researcher Alice Yu, M.D., Ph.D. Unituxin is the only FDA-approved antibody therapy for pediatric high-risk neuroblastoma. After each treatment regimen, Luke’s tumors disappeared, but the cancer remained in his bone marrow with the potential to cause another relapse.

With Luke’s most recent relapse, his family — which also includes Luke’s twin sister, Leia — is in uncharted territory. While they’re nervous, they know that Luke is blazing a new trail for other kids facing neuroblastoma.

Together with Luke’s doctors, Jason and Janelle have evaluated current clinical trials to determine the best shot at finally clearing the cancer from Luke’s bone marrow. Their choice: a promising immunotherapy that injects a supercell into the bloodstream to embed a round-the-clock defense system that eliminates cancer from the bone marrow.

Luke received an infusion of the supercells in October at Texas Children’s Hospital in Houston. But by December all indications were that his disease was progressing and that he would need to be taken off the clinical trial. Plans began to start immunotherapy again, to buy time to find other possible treatments.

But neuroblastoma is nothing if not unpredictable. Scans in January showed enough improvement that Luke was able to remain on the trial with a variance. He began the chemotherapy to make his body ready to receive the next cell infusion in early February.

While this clinical trial brings great hope, it also means weeks away from home to be monitored for side effects. And even trailblazers need encouragement.

Despite Luke’s long battle and many relapses, the Texas family remains grateful. While many of his friends with cancer have passed away, Luke is looking forward to the future, including a career in zoology.

With the support of family and friends, LukeStrong teams across several states have raised over $100,000 over the past seven years. After shaving for 7 years, Luke’s dad, Jason is a Knight of the Bald Table. In 2020, with fewer opportunities to host in-person events due to COVID-19, Team LukeStrong hosted a virtual head shaving event and Janelle’s parents stepped up with a $25,000 donation.

“We love the feeling that St. Baldrick’s has,” says Janelle. “We’re so grateful to everyone who supports the St. Baldrick’s Foundation because that’s what funds the research helping kids like Luke. Whether it’s a large donation, or a lot of smaller contributions combined, every gift makes an impact on a child’s life.”

Please donate to support the virtual head-shaving of Team LukeStrong – or your favorite fundraising participant!