Harold and Judy Sanders, with their son, Kevin, started a Hero Fund in honor of Alan (affectionately known as “Mister Cheeks”) who passed away from childhood cancer at the age of 5. On September 22, 2013, the Sanders family invited their friends to join them in launching Alan’s Hero Fund at a rocket launch fundraiser. Judy recounts the day with photographs by Julie Kelley.

We were so happy to be able to establish Alan’s Hero Fund this summer as a way to commemorate his life and continue his fight. Though we had participated in a couple of head-shaving events since we lost Alan in January, we wanted to do something to mark the creation of this fund, something that was more personal to our family and to Alan’s life.

One thing we often did as a family, and often with friends, was launch model rockets. Alan enjoyed the opportunities to wander the open fields and because he loved numbers so much, he always looked forward to the countdown to each launch. A model rocket launch event was a perfect choice for launching this Hero Fund.

St. Baldrick’s helped us create a graphic of Lucky the leprechaun riding on a rocket, which we used as the basis of the t-shirt design, “I Launched Alan’s Hero Fund.” Not only were we thrilled to see so many people wearing their shirts at the event, the t-shirt sales were a way for people who could not attend to be part of our fundraiser. 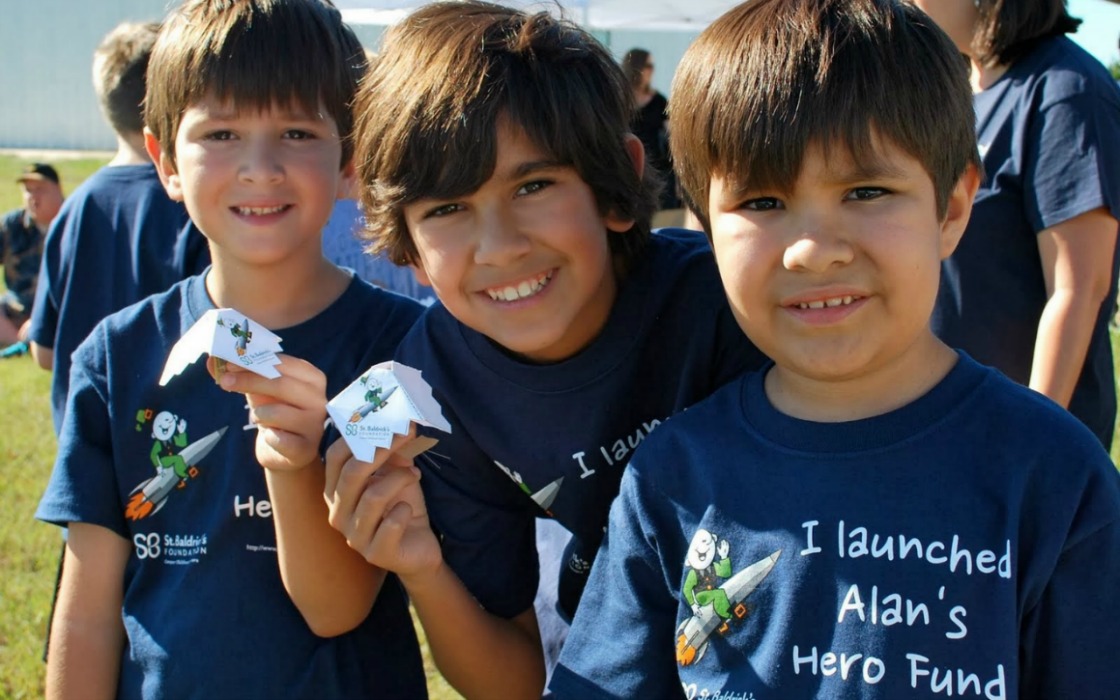 Throughout Alan’s fight, members of our community had always given us so much support, and the same was true for the rocket launch. The Alamo Rocketeers, our local chapter of the National Association of Rocketry (NAR), was a big help with securing a location, setting up equipment and tents, and providing skilled help. 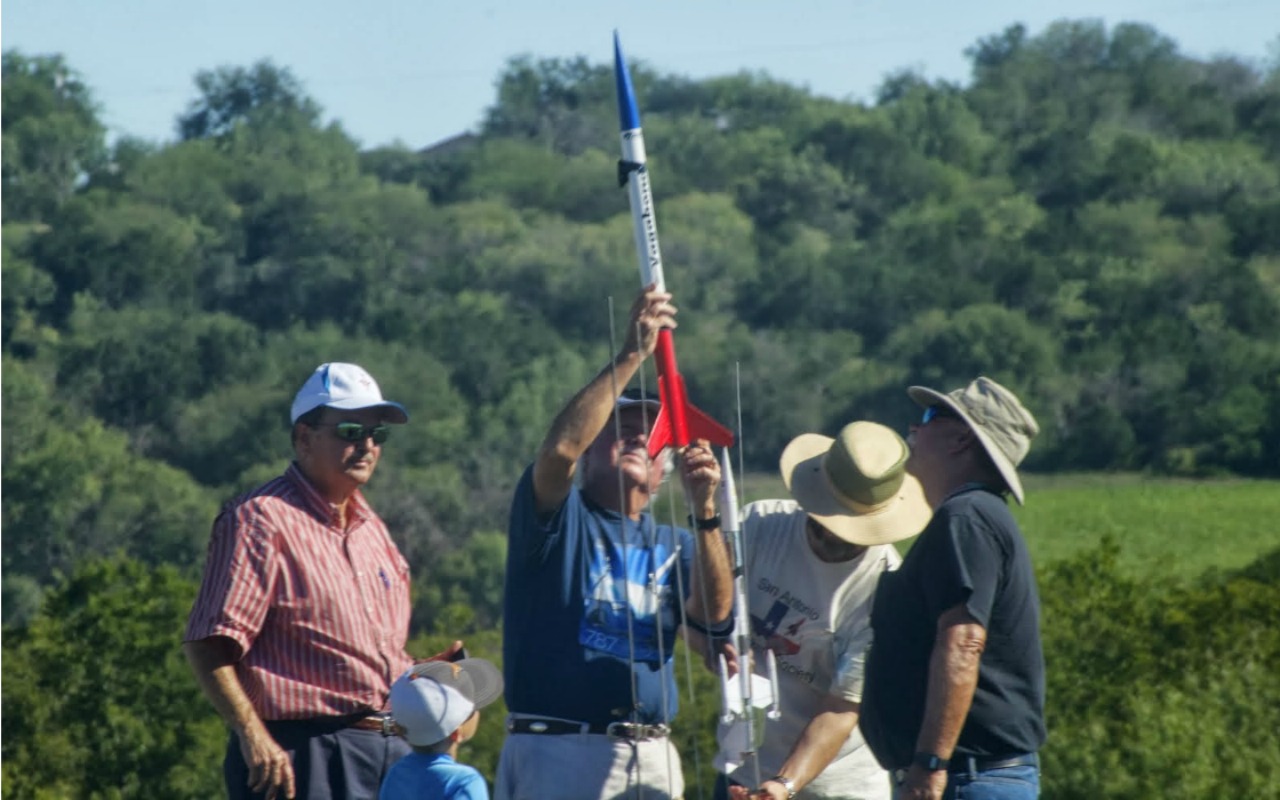 The main fundraiser at the event was the launch of special raffle rockets, and we recruited some Boy Scouts to help with the movement of the younger kids as they lined up, set up their rockets on the pad, and recovered them to place them in the raffle drawing. 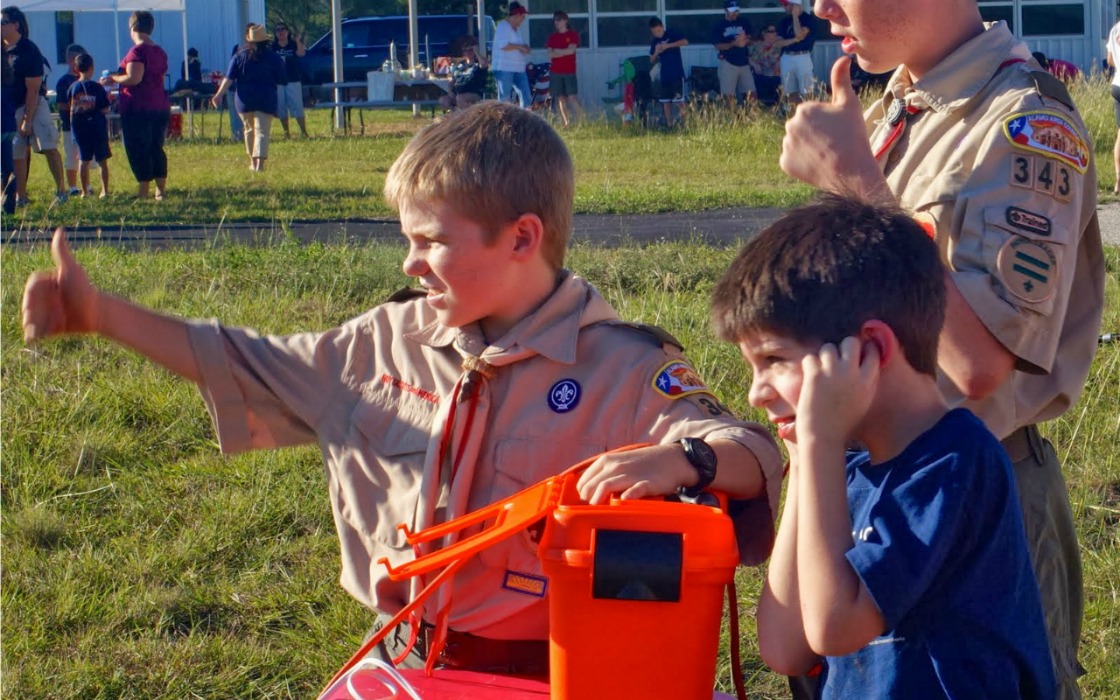 The main focus of the event was the raffle rockets – small rockets made from folded cardstock. They were printed with the rocket-riding Lucky graphic and our sponsors, with one blank side for the kids to write their name on. Cycling through the launch of four rockets at a time, it took hours to launch the over 100 raffle rockets sold! 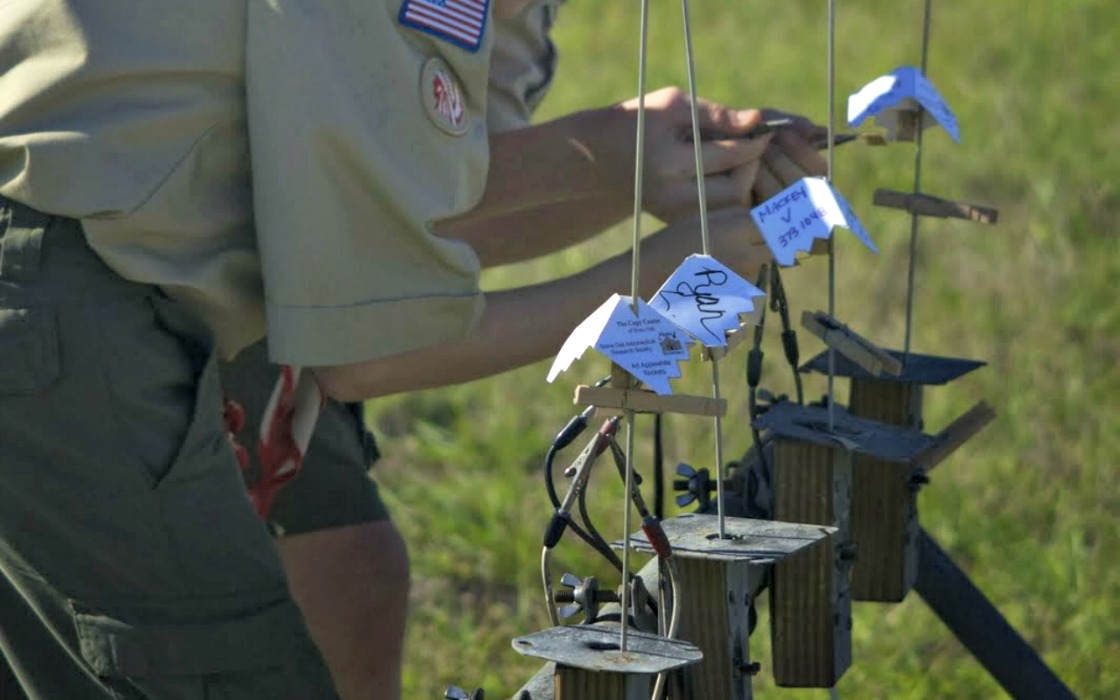 The prizes were three special model rockets: the St. Baldrick’s Rocket (featuring the rocket-riding Lucky with clover leaf fins), the Chalkboard Rocket (a rocket in blue chalkboard paint), and a SpongeBob rocket. Alan loved SpongeBob SquarePants, so we made a model rocket that looked like the one in the episode Sandy’s Rocket, with the addition of Alan looking out of one of the rocket portholes along with SpongeBob and Patrick. 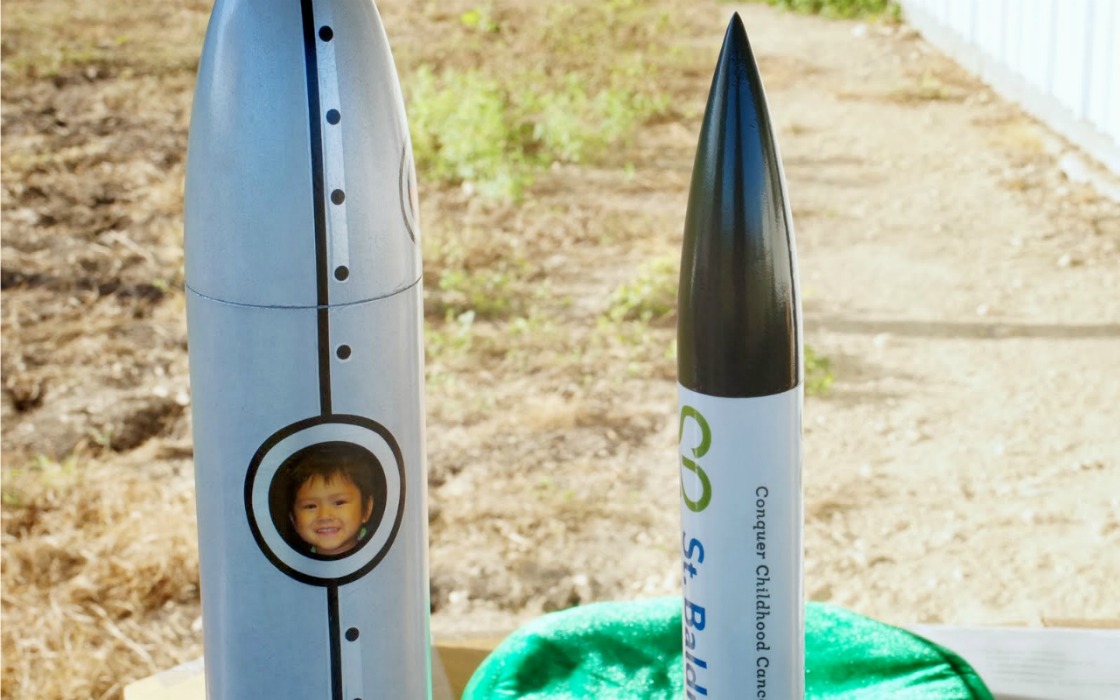 In addition to the raffle launches, we had a second launch pad for sport launches by the Alamo Rocketeers (big rockets for that “ooh ahh!” factor) and attendees who wanted to launch their own rockets. We sold engines and took donations for these launches. 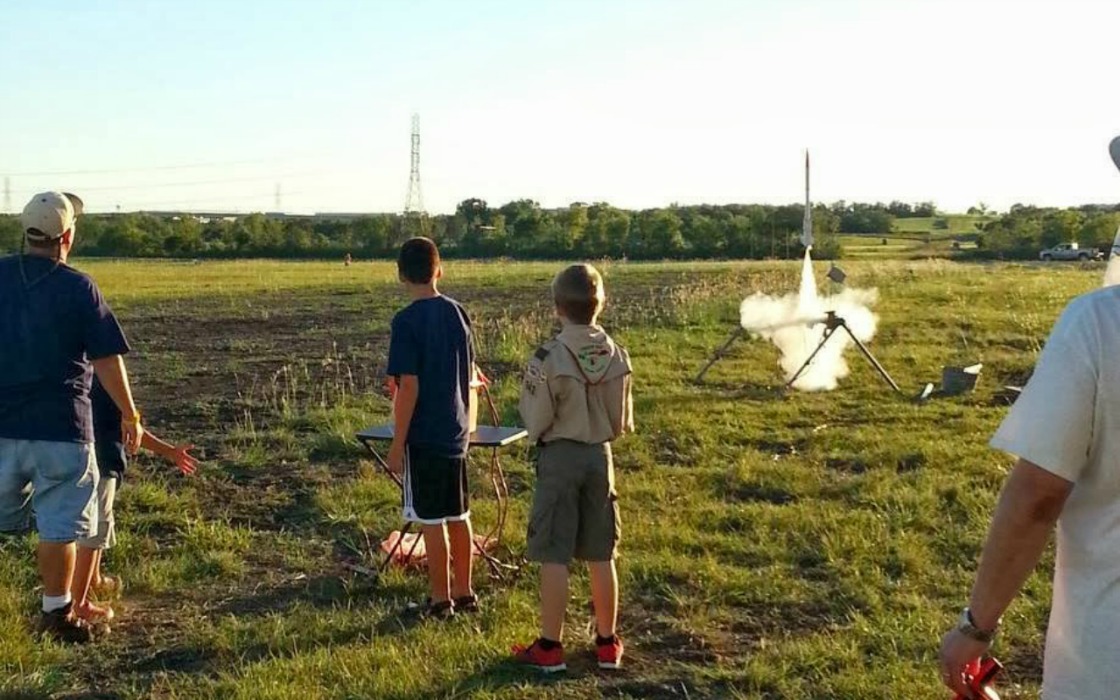 We were fortunate enough to have print and television media come out to cover our launch. For us, it’s as important to raise awareness about the need for childhood cancer research as it is to raise money. 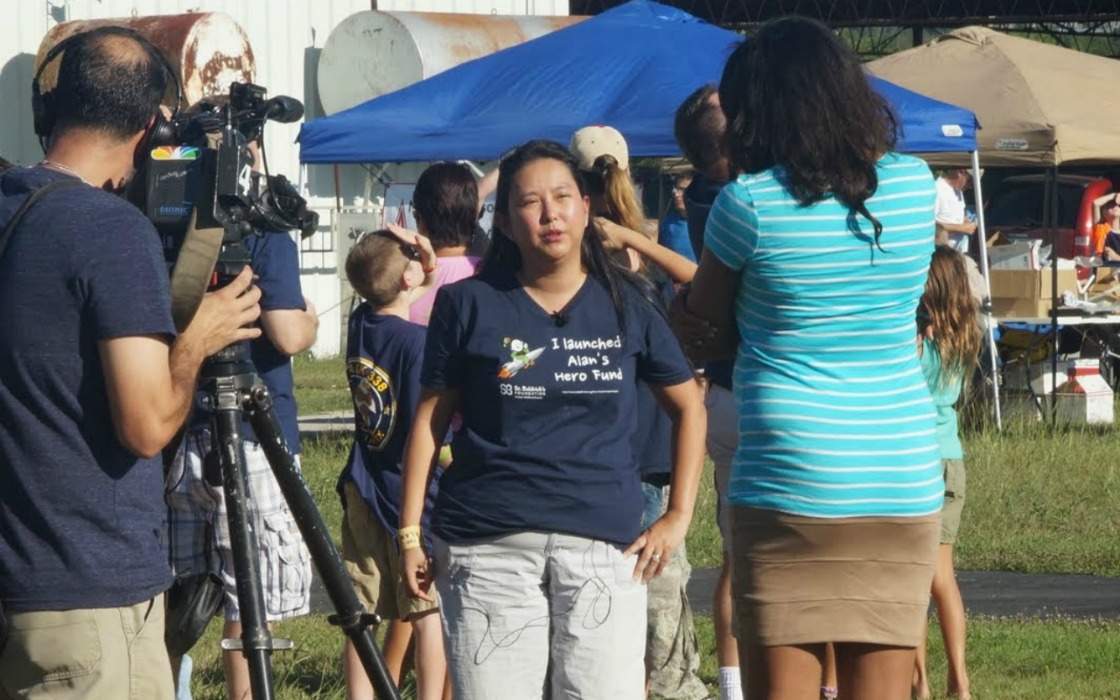 Despite long lines, everyone had a lot of fun. Some people had launched with our family before; others had never seen a rocket launch! Between the t-shirts, raffle and sport rocket launches, and merchandise sales, we raised over $1,500.

All afternoon, people asked us if we would be doing this again. The answer is yes! Working through the hiccups, we learned a few things about juggling so many people in a controlled environment. We had the NAR safety guidelines as a starting point, but made some notes to help make things move more quickly and smoothly. We have already secured a location at STAR Soccer Field in September 2014 with easier access, more parking, and room for a food truck.

With a whole year to plan, we are looking forward to a bigger event next year, and hopefully many more years to come!