The Long and Winding Road to Survivorship

Before the doctors even told us, I knew. Micah had cancer. Even without understanding the enormity of what lay ahead, I knew that it meant my life and worse, my child’s life, would never be the same. Now I’m sharing my son Micah’s story because I believe in the critical need to support childhood cancer research with the St. Baldrick’s Foundation. Please join me in giving hope to the next child faced with a cancer diagnosis. 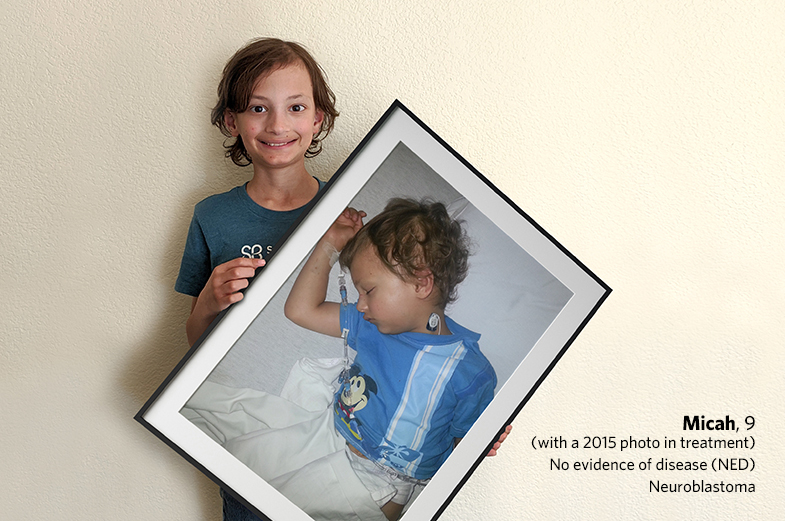 Most parents simply hope their child grows up to be a good person.

I mostly hope mine just gets the chance to grow up.

Before the diagnosis, my husband Jeff and I were like most parents. We hoped we were doing the right things for our children. Micah was just learning to walk so our greatest fear was that he’d fall and bump his head. But when Micah was just 1-day shy of 15-months, we brought him to the hospital for IV antibiotics to treat pneumonia, but he wasn’t responding to treatments.

The social worker asked us to follow her… the doctors needed to talk to us privately.

As we followed her down the long hallway to the other end of the hospital, we steeled ourselves for what was to come. Jeff was convinced that it would be bad but that it wouldn’t be cancer. But I knew. In the pit of my stomach, that place that somehow always knows, I knew our little boy had cancer and there was nothing I could do to change the diagnosis.

There to greet us were five specialists and two boxes of tissues.

I was terrified but my reaction was to push down that fear and make a plan. I felt like if I was doing something, if we had a plan and we’re acting on it, I wouldn’t feel so powerless. So, I asked what is it? How are we going to attack it? And when are you starting? 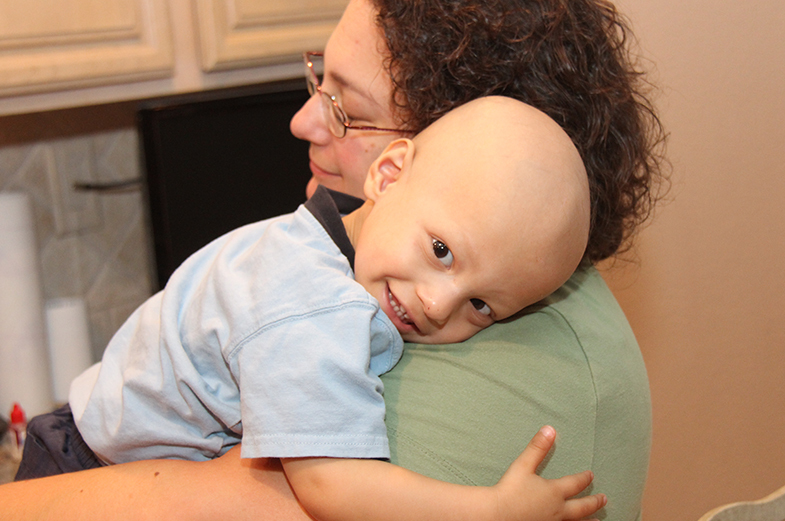 We were told the next year would be the most difficult of our lives.

He was diagnosed with high-risk neuroblastoma, a type of childhood cancer that develops in nerve tissue outside of the central nervous system. They discovered tumor activity in his abdomen, chest, arm and leg bones and also his bone marrow. His oncologist told us we’d endure the most difficult year of our lives. Little did we know then, but the tenacity of the disease meant his little body would be forced to endure the brutal treatments for a total of seven years. But we still consider ourselves lucky. After all, not every child with cancer does survive.

The bumpy and treacherous road to survivorship.

Since that life-altering day in 2012, life has been a roller coaster of emotions. Micah has somehow surmounted every obstacle placed in his path, though it has not been free of bumps. In total he has had three resection surgeries; including the first to remove his primary tumor, 21 rounds of chemotherapy and 36 rounds of radiation – one of which required him to stay in a lead-lined room for four days. He’s had a bone marrow transplant, immunotherapy and has taken part in five clinical trials.

Though he has relapsed twice and had many complications along the way, Micah has been NED (No Evidence of Disease) since August 2014. He continues to be monitored but finished his maintenance treatments in February 2019. As a parent I’m relieved, but the fear never goes away because the risk never goes away.

Every new scan brings me right back to the beginning. Waiting for results is like that long walk down the hospital hall. I still get that feeling in the pit of my stomach. Again, the doctor shares the results, “Everything looks great.” Again, I complete the sentence in my head, “for now.” For a survivor of cancer or parent of a survivor, the battle’s never really over. We don’t know what long term problem could come up that just hasn’t manifested itself yet. He may not get another cancer. But he might develop heart disease that kills him at 30.

Now that Micah’s hair has grown back, he can’t wait to shave it off.

You might think it would only be natural to want to “fit in” with friends at school with a full head of hair. But Micah can’t wait to shave his head, for the 4th year in a row may I add. His reason is truly remarkable. Despite everything he’s been through. All the rounds of chemo, radiation and even though living with cancer is all he’s ever known, he feels “he got off lucky.”

As an Ambassador for St. Baldrick’s Foundation, he says there are kids who’ve lost limbs due to cancer. Been paralyzed, lost functioning, lost parts of their body… all due to cancer. But Micah feels fortunate he’s only lost his adrenal gland and damaged his femur. That’s why he takes part in head-shaving events to raise money for other kids. 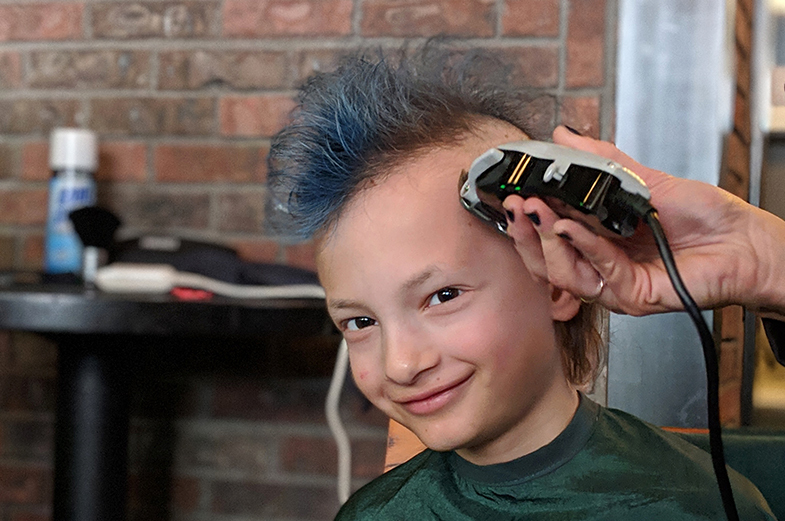 The only certainty in our lives was living with uncertainty.

Although we were terrified that less than 10% of relapsed patients with high-risk neuroblastoma survive, we were angry that any family has to face that news. Less than a 10% chance for a few more years of life is not good enough for a child facing neuroblastoma or any cancer. We knew that we couldn’t do much about our anger, but the best way to address it was to help change the critical lack of funding for pediatric cancer research.

Two separate phases of Micah’s treatment were centered around Unituxin, an immunotherapy drug developed with support from St. Baldrick’s that received FDA approval while Micah was in treatment. Unituxin has been so effective in improving survival among high-risk neuroblastoma patients like Micah that it is now part of the standard treatment approach. Help take away some of the uncertainty – donate to St. Baldrick’s and give the next kid like Micah a big gift … the gift of hope.

Micah’s cancer story turned out to be a story of survival.

With your help the next child and their family can have that same hope.

Every step of Micah’s treatment – especially since his first relapse – has depended heavily on researchers who have worked to develop treatments that are less harmful and more effective and their work continues today. But to keep this crucial work going, more funding is required. Help bring researchers closer to finding options for kids like Micah. Give hope to kids with cancer and those yet to be diagnosed. 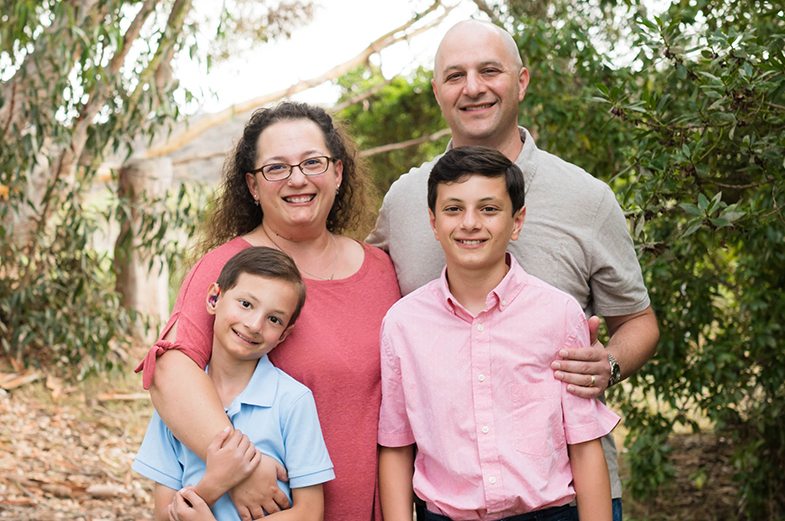 Micah interviews his long-time oncologist and friend, Dr. Marachelian, from CHLA. With a flair for the dramatic, he doesn’t disappoint.