The Boy Who Got Cancer to Cure Cancer: Aiden’s Story

Do something to help cure childhood cancer. 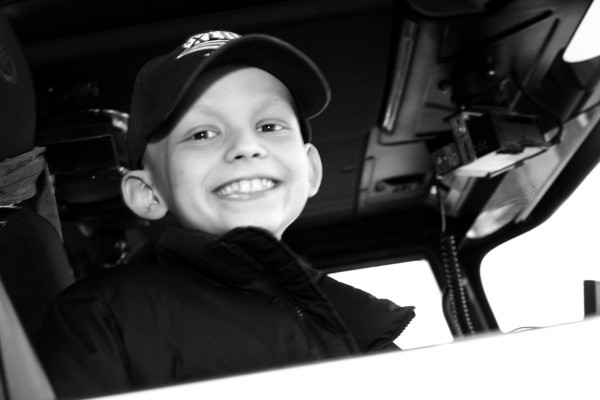 Aiden was the type of kid who lit up a room — friendly, smart, athletic, and caring.

As a baby, we marveled at how quickly he spoke. As he grew, he was kind to his friends and often stuck up for a peer who was being picked on. He played every sport, and although never the star player, he enjoyed team camaraderie (sometimes even with the other team as he made small talk with the kid on first base instead of watching the play).

In July 2008, Aiden was diagnosed with stage 4 rhabdomyosarcoma. This insidious cancer of the soft tissue was inoperable and located in Aiden’s pelvis. It had already spread to his lungs at the time of diagnosis. 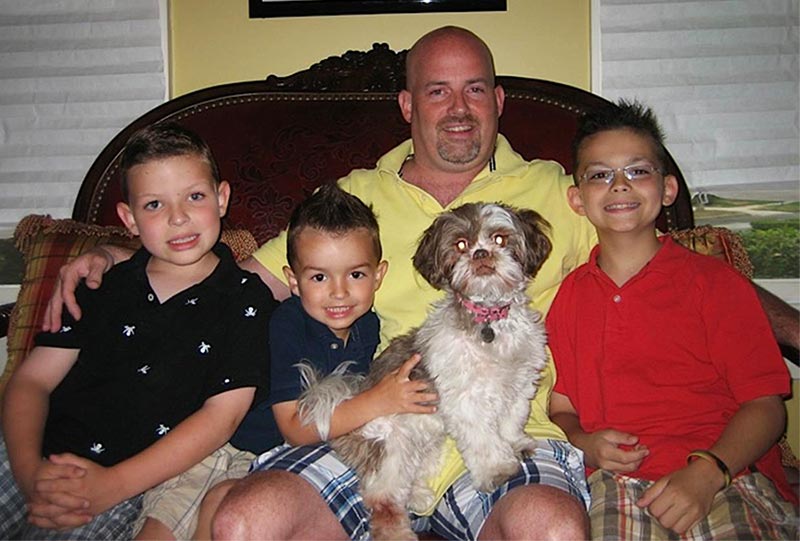 Aiden (right) with his dad and brothers before he was diagnosed with childhood cancer.

When he was diagnosed, Aiden remarked, “I think I know why I got sick. I got cancer to cure cancer.”

His treatment was to be a grueling ordeal of seven different chemotherapies plus radiation of his pelvis and lungs. We, as all cancer families, I imagine, had no idea what we were in for.

Besides the intensity of treatment, there were physical and emotional changes in our son that we hadn’t anticipated, a roller coaster of side effects ranging from severe nerve damage that required him to wear leg braces, to mucositis that inflamed his digestive track to the point where his own saliva was too painful to swallow.

The obvious outward sign, baldness, occurred slowly but brought with it more surprising side effects — stares from strangers and the total eradication of Aiden’s self-esteem. Aiden, who was never shy or embarrassed, was now reluctant to go out in public and never went anywhere without a hat on.

Aiden during treatment for rhabdomyosarcoma, a type of childhood cancer.

I was surprised by his reaction. He was fascinated by what was happening to him and took notes about theories he had on ways to change treatments for others in the future. At home he was the same funny, strong kid. But in public, he walked with his head down, hoping to avoid the stares and pitiful glances he received.

We frequently found the treatment as heartbreaking as the diagnosis.

Aiden was about seven months into treatment when we first heard of St. Baldrick’s. A friend asked if I could sign him up as an Honored Kid so their friend could shave for him. At the time, I had no idea what St. Baldrick’s was or why they shaved heads.

After I registered Aiden as an Honored Kid, I received a call from a man named Bob GaNun. He wanted to know if Aiden would like to come to the St. Baldrick’s event being held in our town.

At this point in Aiden’s treatment, he was very sick. There was no way to predict how he would feel from hour to hour, let alone to commit to attending an event a month away. Bob said he understood and was going to plan as if Aiden were up to it but we could decline at any time.

The month passed quickly. Soon St. Baldrick’s Day in our town of Floral Park, New York, arrived. Bob made arrangements for us to be brought from our house to Trinity Restaurant where the event was to be held.

A huge fire truck with lights flashing and sirens screaming took us to the event! Aiden was amazed and excited to have a chance to ride in the huge truck.

As we made our way to the event, we could see a crowd had formed in front of the restaurant. In the front row stood five little 9-year-old boys — Aiden’s friends — screaming for him.

The crowd cheered as Aiden clambered down from the truck. Aiden beamed — a real smile from the inside out! Quickly we realized his friends were there to shave their heads. 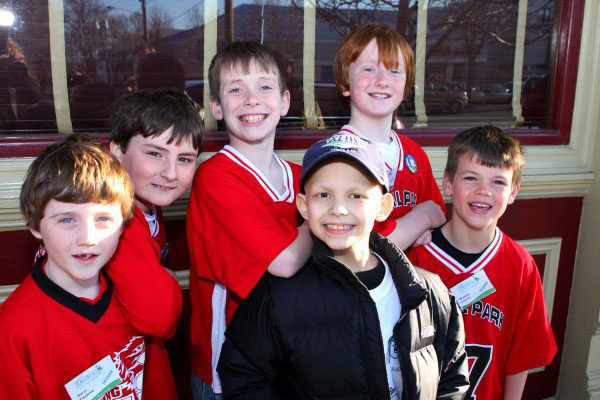 Aiden and his friends at the Floral Park, New York, head-shaving event in 2009.

Before we knew it, we were inside the restaurant. Aiden sat in the middle of his friends as they shaved their locks in solidarity with him. It was magic to see Aiden sitting with them, laughing and smiling. Before long all five of Aiden’s friends were bald.

I looked up and to my surprise, I saw six bald heads instead of five and one hat. Aiden had removed his hat in public for the first time. He even posed for pictures with his newly bald friends.

“This is the first time I feel normal,” Aiden told me.

In that one sentence it made sense to me. I already understood the fundraising, but I didn’t really understand the shaving until that moment. The power of solidarity, the selflessness of the act of shaving, all making the statement, “You are not alone.” 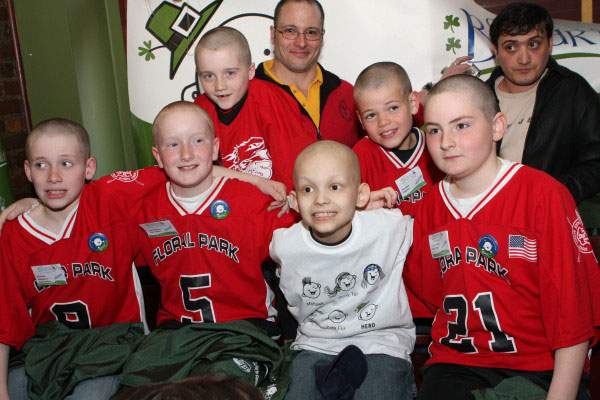 Aiden with his friends after they shaved their heads. “This is the first time I feel normal,” Aiden told his mom.

The following year’s event saw a huge swell in the number of shavees, an enormous amount of them kids. At the time, Aiden believed he was in remission. We knew the horrible truth that his cancer had returned and this would most likely be the last event he would attend.

His hair had somewhat grown in, but understandably he wasn’t ready to part with it. His brothers shaved their heads and raised quite a bit of money. We tried to smile as the boys all were having such an awesome time. 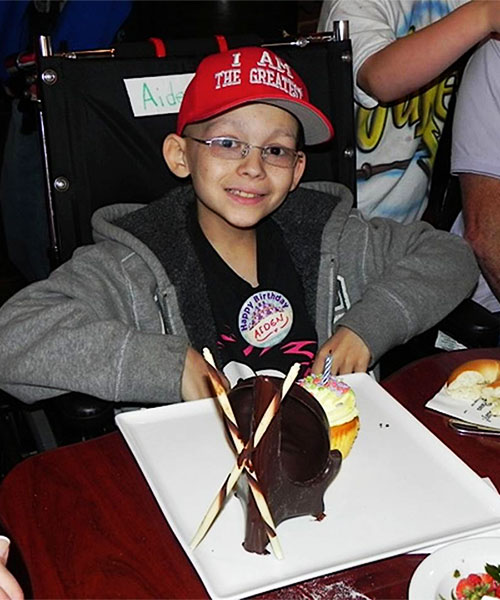 Shortly after Aiden’s 11th birthday, he decided to stop chemo.

Aiden said he planned on shaving next year when his hair had really grown in. He spoke of how much he loved this day and how he really hoped we would raise a lot of money for research so no other kids would suffer as he had. We were heartbroken.

Eventually we broke the news to Aiden about his relapse. The doctors didn’t have very many options for him. We tried a few different clinical trials and an extremely painful lung surgery. Nothing helped.

Aiden’s oncologist spoke to him about how nothing was really helping him. Aiden sobbed, “Please, do something! I can’t die at 10!”

They put him back on chemo, hoping for a miracle. None came.

On October 15, 2010, Aiden turned 11. Soon after, Aiden decided to stop the chemo that made him sick and bald but wasn’t helping him. The tumors continued to grow. He passed away on December 30, 2010. 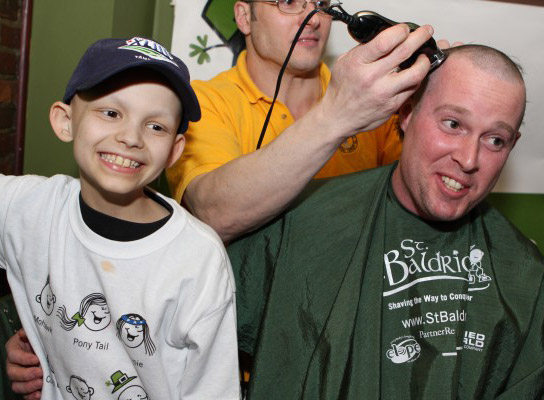 Aiden loved St Baldrick’s. He knew, as all of the adults in the cancer world do, that treatments are brutal and old. He knew firsthand the suffering that takes place daily for kids with cancer and how much that needs to change.

When Aiden passed away, we, like most families who lose a child, wanted to do something. We wanted his death to have a meaning and a purpose. Instead of starting our own foundation, we poured our efforts into St. Baldrick’s.

We have continued to grow our St. Baldrick’s event and have raised over $1 million since Aiden’s first event in 2009. We are currently setting up a Hero Fund with St. Baldrick’s called Aiden’s Army, our team name.

I have been able to speak to groups about kids’ cancer and St. Baldrick’s, and I recently went to Washington, D.C., to speak with members of Congress to advocate for increased funding for children’s cancer research. It felt good to share Aiden with people and try to enact a change for children in the future.

So in the end, maybe Aiden was right. Maybe he did get cancer to cure cancer, just not in the way we thought.

You can help cure childhood cancer. Get involved.