Meet Your 2016 Battle of the Bald Champion

37 events, thousands of participants, and over $235,000 raised for childhood cancer research — it’s safe to say the ultimate college head-shaving showdown had a successful second season. But who came out on top in this year’s Battle of the Bald? The results are in — read more to find out! 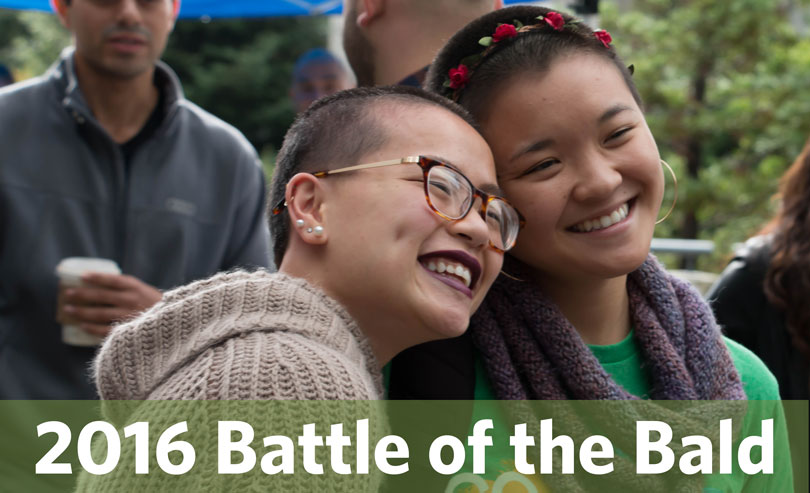 All images courtesy of Laurie Aiello

With her son Grant in her lap, her father getting shaved in the seat next to her, and her daughter helping guide the razor, Katrina Learned’s head-shave became more than a fundraiser — it was a moving family moment.

Katrina was the top fundraiser at the event, raising just over $14,000 for childhood cancer research and helping propel the UC Santa Cruz Genomics Institute event to the top of the charts for the second annual Battle of the Bald.

Katrina’s daughter Aurora was diagnosed with neuroblastoma when she was 2 months old. Aurora’s hair loss as a result of chemotherapy is something Katrina remembers vividly.

“It was actually kind of a defining moment for me in her treatment because Aurora didn’t have any symptoms when she was diagnosed,” Katrina said. “It felt so counterintuitive to pump her full of toxic chemicals. It [the hair loss] was just a visible and physical reminder of what we were putting her body through, of the kind of treatment she had to receive to be alive.” 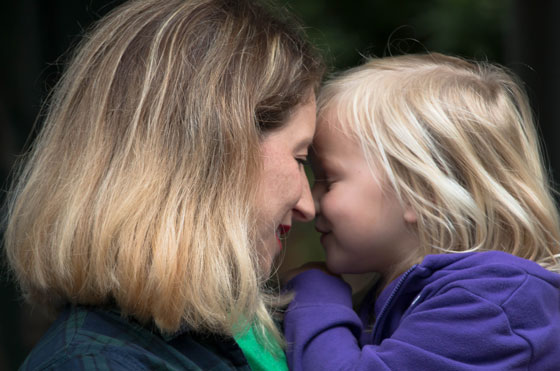 Katrina and Aurora before the shave.

It’s that kind of treatment she is working to change — with her career, and through her fundraising for St. Baldrick’s.

“The goal is that every child has this personalized treatment option,” said Michelle Riddle, the Treehouse Initiative’s marketing manager and the Volunteer Event Organizer (VEO) of the UCSC Genomics head-shaving event. “I’ve heard too many stories of children that aren’t dying of cancer — they’re dying from the treatment.”

Combining her background as a genomics data analyst with her desire to find cures for pediatric cancer, Katrina teamed up with Olena Morozova, and the Treehouse Initiative was born.

Katrina wanted her shave to make a big impact, so she set a firm goal and didn’t back down.

“I kept thinking ‘I don’t know if I can do this’ earlier in the month while I was raising money,” Katrina said. “But then I thought, ‘I’m lucky I have the choice.’ So many kids, they don’t have a choice.” 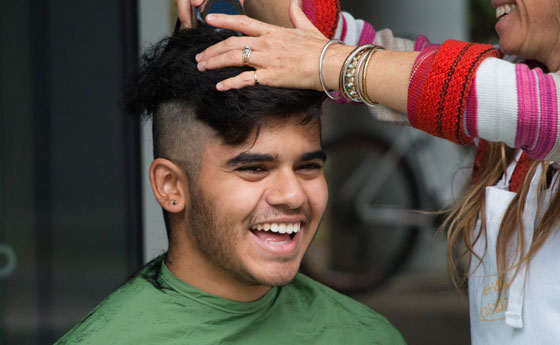 A shavee℠ at the UCSC Genomics Institute head-shaving event.

But what would a successful event be without a superstar VEO?

Six months ago, Michelle was just starting her new job with the Treehouse Initiative. Her first big project? Organizing their St. Baldrick’s event.

BLOG: ‘So There Will Be a Cure’: One Brave 9-Year-Old Shaves for Kids With Cancer >

It was no small feat, but all the hard work paid off. Now, the UCSC Santa Cruz Genomics Institute gets to take home the Bald Cup — and Katrina, as the top fundraiser in the Battle, will get a free year of haircuts, courtesy of our national partner, Sport Clips Haircuts!

At the end of the day, the cause is what matters most — to shavees, volunteers, and the Treehouse team. Because of childhood cancer research, Aurora is now three years cancer free. Now, she has a chance to grow up — a chance Katrina believes all kids with cancer deserve to have. 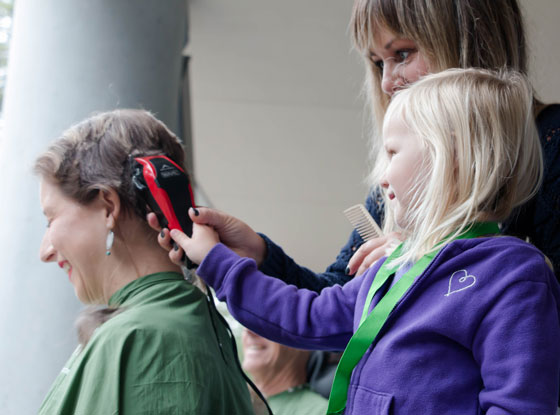 That’s what inspires Katrina to keep fundraising, and to keep doing the work she for the Treehouse Initiative.

“We feel so fortunate and want every kid who gets diagnosed with cancer to have that same chance. More than a chance — we want that to be what they expect. What they can rely on.”

All kids deserve the chance to grow up. Register today to start your own event for childhood cancer research.