Rabbi Rebecca Einstein Schorr recently took to the TEDx stage to tell the 36 Rabbis’ unforgettable story. As the Rabbis near their $1 million goal for childhood cancer research, a generous donor has agreed to match any new and increased gifts to St. Baldrick’s for the 36 Rabbis’ campaign. Make your gift go twice as far for kids with cancer. Make a donation to the 36 Rabbis.

More than six dozen rabbis walk into a room and shave their heads.

Don’t worry; this isn’t the start of an ethnic joke. This is a true story of what happened when a group of religious leaders decided that they didn’t want to bury any more kids whose lives could have been saved. It’s a lesson that a seemingly innocuous comment can be the beginning of something amazing. And it is a reminder that ordinary people can do extraordinary things.

At the end of October 2013, my dear friend, Rabbi Phyllis Sommer, casually mentioned that the time had come for her to participate in a St. Baldrick’s shave event. She first had learned about the St. Baldrick’s Foundation just after her son Sam was diagnosed with acute myeloid leukemia in June 2012.

Like many parents of kids with cancer, Phyllis had wanted to do something to support the important work of St. Baldrick’s. I wondered out loud if she thought we might get a few of our rabbinic colleagues to join her and shave their heads, too.

Jewish tradition teaches that at all times there are 36 righteous people in the world, and if just one of them is missing, the world itself would come to an end. These 36 individuals are known as the Lamed-Vavniks, based on the numeric equivalents of the two Hebrew letters for 36: lamed, which is 30, and vav, which is six.

And so it was that “36 Rabbis Shave for the Brave” was born. We envisioned a celebration with Sammy at the center and their entire family in attendance.

Just two weeks after this conversation, however, Phyllis and her husband, Rabbi Michael Sommer, learned that Sammy had relapsed. His bone marrow transplant had failed.

“How will you live without me?   Will you have another baby to take my place?”

“You’re gonna put me in a box and put me in the ground.  I’ll never get to do all the things I want to do.   I wanted to do something amazing.”

But Sammy’s wish to do something amazing had already been set into action.

Word spread through our community, and before we knew it, more than 70 rabbis from across different Jewish denominations across North America were registered to shave their heads.

This small idea grew into something huge.

With participants spread out across the U.S. and Canada, we were able to get attention, both local and national. We were everywhere, and our 75 rabbis told their story to everyone.

We met our initial goal of $180,000 just a few weeks after we launched and so we set a new goal…and another…and another.

We are now on track to pass the $1 million mark. Not from corporations, but from thousands upon thousands of small donations from around the world.

That evening was something sacred. It was…incredible.

Despite our sadness that Sammy wasn’t there, it still felt like a celebration. There was laughter — a lot of laughter — and a lot of rubbing of newly-shorn scalps. Amid hugs, laughter, and tears, we thanked God for giving us life and the strength to do good in this world.

Each shavee was given a button that said “Ask me why I’m bald.” This button provided opportunities for our bald friends to engage strangers in a conversation about pediatric cancer research.

One of my favorite stories involves one of my colleagues who, when going through security, was worried that his new hairdo didn’t match his government-issued I.D. Though he went through the detector without a problem, as he bent down to put on his shoes, the TSA agent said “I wouldn’t do that.”

“Do what?” my colleague asked. 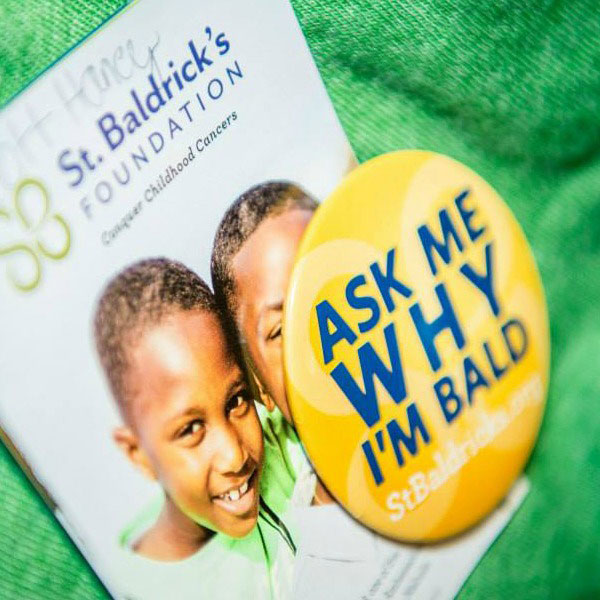 He then told her about Superman Sam and about a bunch of crazy rabbis and what we had done in his memory. By the time he had finished, the TSA agent had tears in her eyes. After a moment she said, “Thank you for that powerful experience. I feel like Sammy is now a part of my life, too. How can I help?”

More than six dozen rabbis walked into a hotel and shaved their heads, not as a joke.

This story could be your story, too. It’s the story of what happens when a group of ordinary people yearn to do something, and reach deep into their social networks to make something extraordinary happen.