Super Ty passed away on October 17 – our heavy hearts go out to his family and friends. This article was written a few months before his passing by his mom, Cindy. He will forever be a testament to the reason we must continue the fight to cure childhood cancer.

We call him SuperTy because his fighting spirit is remarkable. He is a brain cancer warrior and has beaten the odds over and over again. Ty is 4 years old and a two-year veteran in this war against childhood cancer.

When we heard those words.

On August 11, 2010, my husband and I heard the words that no parent should ever hear: “Your child has cancer.” A tumor was discovered at the base of his skull pressing on his brainstem. He was 2 years and 10 months old.

A rambunctious toddler with curly blonde hair and an infectious smile, Ty didn’t have any developmental delays, medical issues or neurological deficits prior to his diagnosis. He was just a terrible sleeper and woke up frequently during the night. In August 2010, an MRI image showed a tumor, about one inch in diameter, growing from his clivis and pushing against his brainstem. No wonder he couldn’t sleep. Lying down increased the pressure on his brainstem and was causing intermittent head pain. Life as we knew it would never be the same.

What his little body went through. 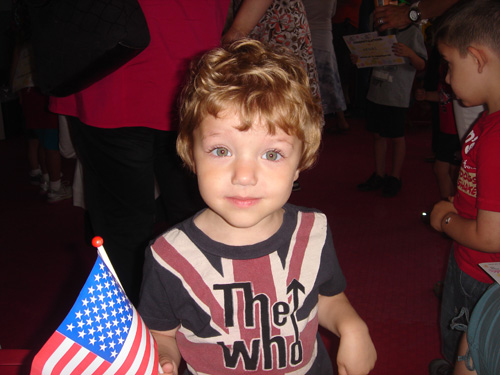 Of course, the first thing we did was research. We were constantly looking online for information on the best treatment protocols for Ty. The majority of all pediatric brain tumors are rare and unique, which meant we found little information on proven protocols to treat Ty’s rare brain tumor type – it simply doesn’t exist yet. This is something we hope will change with increased awareness and funding for medical research.

The first year in treatment was brutal. He endured 16 surgeries, almost 200 nights in the hospital, infections and unsuccessful chemotherapy regimens that were destroying our perfect baby boy. Despite all of the pain and suffering, the chemo wasn’t working. Ty ended up with additional tumors in his brain.

Although his early age put him at risk for undergoing radiation therapy, we were left with no other choice. Ty endured 45 treatments. Since the completion of his final course of radiation therapy in June 2011, Ty has remained cancer-free with no evidence of disease.

The setback none of us were expecting.

Ty’s recovery has been nothing short of miraculous. Although he remains cancer-free, he is on a metronomic chemotherapy cycle, which means he ingests the toxins every day at a lower dose so he is less at risk for infections, mucuscitis, losing his hair, and nausea. Until this past March, he was attending pre-school, scooting around the house faster than lightning and learning to walk again. 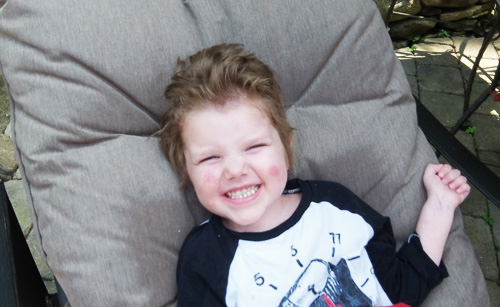 In April, close to one year after he completed radiation, Ty experienced a tragic setback as a result of the harsh treatments we subjected him to. Ty suffered post-radiation brain bleeds, swelling, and necrosis to the brainstem area that has left him completely paralyzed. He had come so close to walking again, but now he is more disabled than ever.

Where we are now and why we fight.

Ty will be starting Kindergarten in September and he’s improving every day, beating the odds with another miraculous recovery. We will continue to do everything we can to help him. This experience has opened our eyes to how important it is that safer, less invasive treatments are discovered for our children. This is why we support the St. Baldrick’s Foundation – because they are making a difference by funding research for safer treatments for our children.

I see that twinkle in his eyes when he tells me how he wants to “jump in muddy puddles.” I do believe that someday he will. We’re told that the chances are not likely, but I’ve seen how he beats the odds and believe in him 100 percent. My Ty is SuperTy.