SuperGirl Jadyn Faces Cancer for the Fifth Time with a Smile

Jadyn has fought childhood cancer five times in only six years. Now 11 years old and known as the most radiated kid in Canada, Jadyn always finds the bright side in her long battle. You can help kids like Jadyn. Get involved. 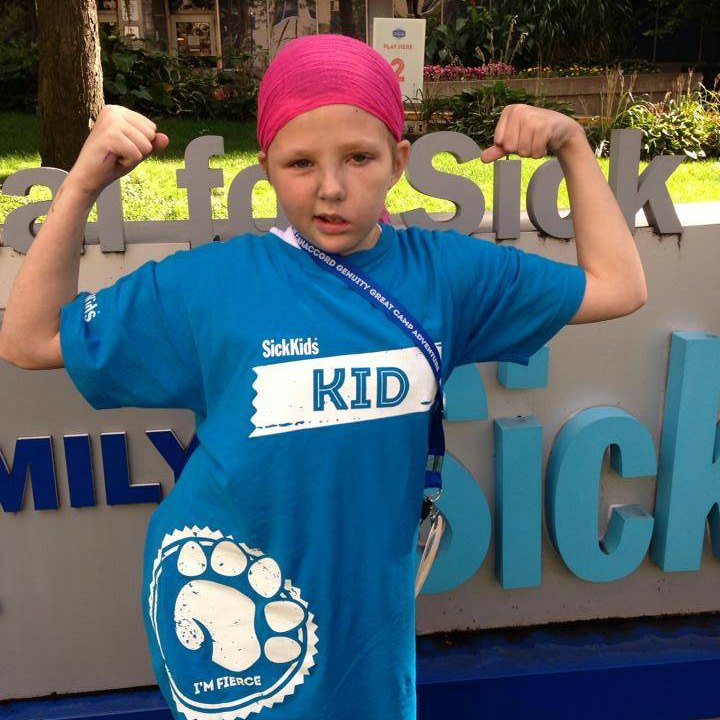 Jadyn Schill has more than earned the nickname “SuperGirl.” She’s beaten the odds again and again for more than half her life.

In 2008, when Jadyn was 5 years old, she was diagnosed with an aggressive type of cancer — an ependymoma brain tumor.

Now 11 years old, she’s fighting the disease for the fifth time, after relapsing nearly every year since 2010. She’s undergone multiple brain surgeries and 123 rounds of radiation. Through all of this, Jadyn’s outlook on life is steadfastly sunny. In fact, when things get tough, she has a certain phrase that she tells her mother, Christie.

“Don’t worry Mummy,” she says. “There’s always a bright side. We just have to look for the bright side.”

A couple of weeks before Jadyn was diagnosed, her mom knew something was wrong. The left side of her daughter’s face was paralyzed. Christie rushed her to the family pediatrician, who referred them to a specialist. The specialist diagnosed Jadyn with Bell’s palsy, a disorder that causes facial paralysis, and sent them home. 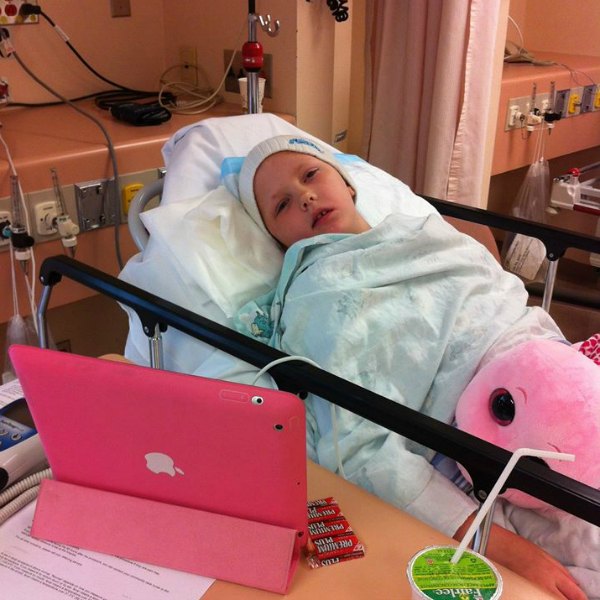 Even through multiple rounds of intense treatment, Jadyn has kept her sunny outlook on life.

“I was one of those moms who went in and said, ‘I’m sorry, but she needs a scan. Until she gets either a CT or an MRI, I’m not leaving.’”

Jadyn was diagnosed with the ependymoma tumor, a type of central nervous system (CNS) tumor. CNS tumors are the most common solid tumors of childhood, and they have the highest mortality rate of the childhood cancers. Nevertheless, research for childhood brain tumors remains underfunded, and treatment options are limited.

Jadyn went in for her first brain surgery only five days after being diagnosed. Christie kept telling herself that her little girl would be fine. Everything would be okay.

“Walking into the ICU after her brain surgery is when it all kind of hit and I almost passed out,” Christie said. “You can try to prepare yourself to see your child like that, but really, you can’t.” 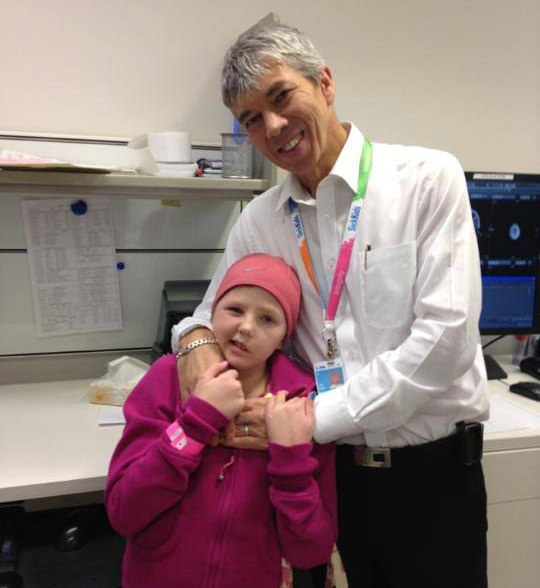 Jadyn poses with her oncologist Dr. Eric Bouffet, who Jadyn persuaded to shave for the cause.

Jadyn was so young that she didn’t understand what was happening to her. Jadyn remembers a few things — her family crying at the news and knowing that she shouldn’t throw a fit.

“I was kind of upset, but it’s life though,” Jadyn said of her diagnosis.

Current chemotherapy doesn’t work on her type of tumor and she’s maxed out the radiation — she’s been dubbed the most radiated kid in Canada. Alongside the effects of the tumor, each time Jadyn has been treated there are more consequences, including deafness, facial paralysis, and general weakness on her left side.

Jadyn and her family have become active advocates for childhood cancer research. They live in Ontario and have participated in several events for St. Baldrick’s and for Childhood Cancer Canada, the St. Baldrick’s Foundation’s partner in the country, raising close to $25,000 as a family.

Jadyn is a champion for the cause, shaving when her hair grows back after treatment and speaking about her disease whenever and wherever she can.

Her mom and her brother, Austin, have shaved. Even one of Jadyn’s oncologists, Dr. Eric Bouffet, braved the shave in March at an event in Toronto which raised nearly $150,000. Jadyn wielded the razor with help from Sons of Anarchy star Kim Coates. (“He’s my BFF,” Jadyn said of the actor.) Then Jadyn gave her doctor a kiss atop his bald head when she was done. 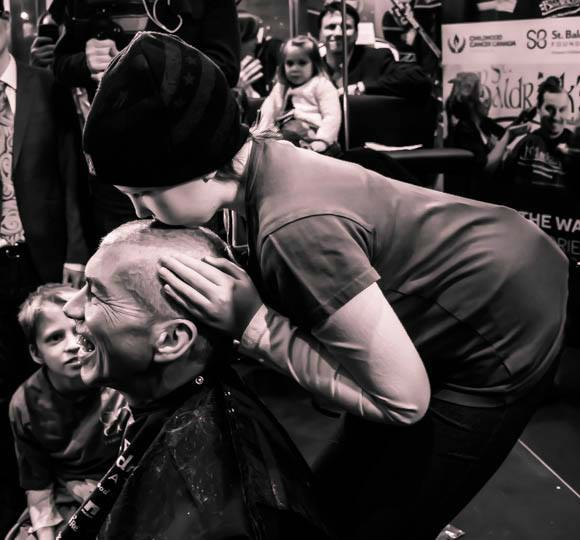 Jadyn shaved her oncologist’s head at a St. Baldrick’s event in Toronto that raised nearly $150,000 for childhood cancer research.

Jadyn is “all over her doctors” about shaving for St. Baldrick’s, Christie said. She won’t take no for an answer.

As Jadyn puts it, she can be “very encouraging.”

The 11-year-old has been busy this summer. She’s sung along at multiple concerts, including a One Direction show — Harry smiled and waved at her. Just last week, she met one of her favorite television stars, Calum Worthy from Disney’s “Austin & Ally.” (A few days before meeting him, she was “completely losing her mind,” her mom said.) She went to California and gave surfing a try. At Disneyland she was whisked to the front of all the lines and was greeted by a singing and dancing flash mob at the park’s entrance. 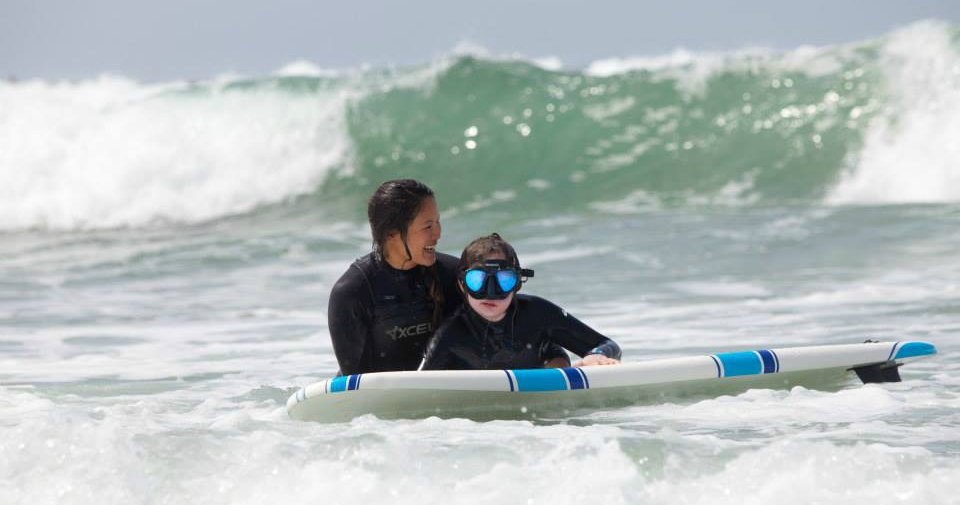 When Jadyn visited California, she got the chance to give surfing a try. Though she wasn’t able to stand up on the surfboard, she was able to balance on her knees!

“It was awesome,” she said. “Everything’s just awesome.”

What’s even more awesome? Her most recent scan showed her tumor had stabilized and even shrunk.

Last September, Jadyn went under the Gamma Knife, a one-day treatment that sent hundreds of small beams of radiation through her brain, where they intersected to focus on her tumor. Finally, her mom said, it seems to have kicked in.

“Even her doctors are shocked,” Christie said. Dr. Bouffet was so surprised and happy that he emailed the family all the way from Saudi Arabia, where he was attending a conference.

“I’m not really allowed to have any more radiation, and chemo doesn’t work on my type of cancer, so I was very nervous that it was going to come back or something, and we wouldn’t be able to do anything about it,” she said.

It’s been a long journey for Jadyn and her family. She’s now been battling cancer for longer than she was healthy. Her family celebrated that milestone with a party for their tenacious SuperGirl.

Jadyn is raising money for childhood cancer research. Help her reach her goal by making a donation on her fundraising page.