In the first study of its kind, St. Baldrick’s Supportive Care Grant Recipient Kathleen Ruccione and her team harnessed the power of the MRI to examine a harmful consequence of childhood cancer treatment — iron overload. Support researchers like Kathleen in their vital work on childhood cancer. 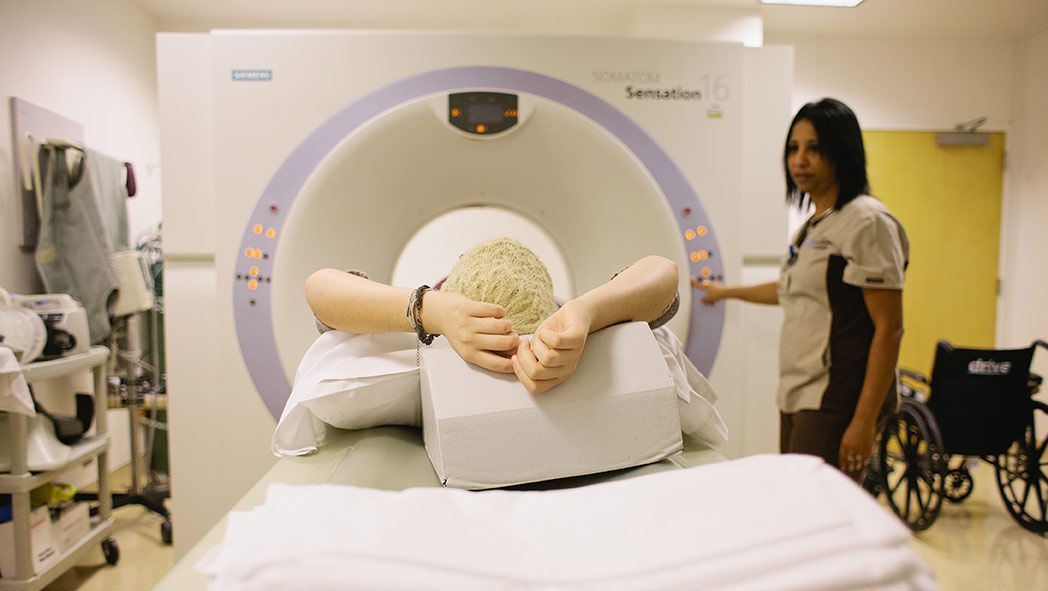 Getting an MRI is a regular part of life for many kids with cancer, like 2013 Ambassador Emily. Dr. Kathleen Ruccione used MRIs in a new and different way — to measure iron overload in cancer survivors.

When kids battle cancer, blood transfusions are often a life-saving treatment. But excess iron from transfusions can settle in the liver, pancreas and heart, with harmful effects for childhood cancer survivors, especially when coupled with consequences from chemotherapy. Called iron overload, the condition presents few symptoms before the damage is done. The key is to monitor and treat kids before it takes a toll.

Using blood tests and MRIs, Dr. Ruccione looked for iron deposits in 75 young cancer survivors between the ages of 8 and 25. She also had them fill out questionnaires about their quality of life, like fatigue level. Their cancers varied, from acute lymphoblastic leukemia to acute myeloid leukemia and others, but all had received transfusions during their treatment.

Because the hospital’s MRI machine is so heavily scheduled with clinical appointments, those cancer survivors came in during the weekends and in the evenings to take part in the MRI portion of what was dubbed the “Ironman” study. (Dr. Ruccione even handed out stickers of the armor-clad superhero to the participants.)

“It’s pretty remarkable that 75 young people and their families were willing to do this,” she said. “Over and over, in one way or another, what they said is they wanted to do this to help other kids who were being diagnosed and treated for cancer.”

Dr. Ruccione and her team used software developed by experts at CHLA to measure the iron levels in the children’s organs, without the kids having to do anything but lie still and listen to music or watch movies. So what was the biggest risk to the participants during the study? Extreme boredom for those 45 to 60 minute stretches.

“That is really the worst risk,” Dr. Ruccione said, laughing. “But they were fantastic.”

The study found that more than half of the participants had high iron levels in their liver and one-quarter had high iron levels in their pancreas. No iron was found in participants’ hearts during this testing, which was good news, though Dr. Ruccione cautioned that the MRI results were capturing only one point in time. Results were sent to patients’ physicians so they could be properly treated if the MRI showed iron. Iron overload can be treated with drugs called chelators, which remove excess iron from the body.

“We would never say we don’t want to have transfusions. I think the lesson is really what many parents do anyway. That is, this whole idea of people who become ‘momcologists’ and keep track of their child’s chemotherapy and keep track of all these things,” she said. “Parents could be keeping track of transfusions too, and asking the question of the health care team, ‘Is there anything we should be doing to monitor my child in relation to the transfusions they have been given?’”

Read about a St. Baldrick’s researcher who is also a childhood cancer survivor.

Right now, it isn’t routine to track the total amount of blood a patient has been given in transfusions, Dr. Ruccione said. She wants the study to encourage hospitals to modify or establish guidelines for monitoring transfusions and assessing the risk of iron overload.

“That’s a really basic first step that we hope will happen, and that our study will help provide some of the evidence base for people to do that,” she said.

Beyond the clinical importance, Dr. Ruccione hopes the study will inform survivors and their families about iron overload and what they can do on their own to minimize those risks.

“Being moderate about things like drinking, being really good about exercise and sleep — all of those things that you know are good basic health practices — are going to be even more important to survivors that may have elevated liver iron or pancreatic iron, or even, although we didn’t find it, maybe there are some who have elevated cardiac iron,” she said.

“I can only say I am beyond grateful to St. Baldrick’s, because this study literally could not have happened without that funding,” she said.