St. Baldrick’s Scholar Dr. Muller Fabbri, of the Saban Research Institute at Children’s Hospital Los Angeles, just published exciting new research — he and his team learned that one of the keys to cancer’s survival lies in communication. Read on for how his discovery could unlock new gene therapies for kids with drug-resistant neuroblastoma. 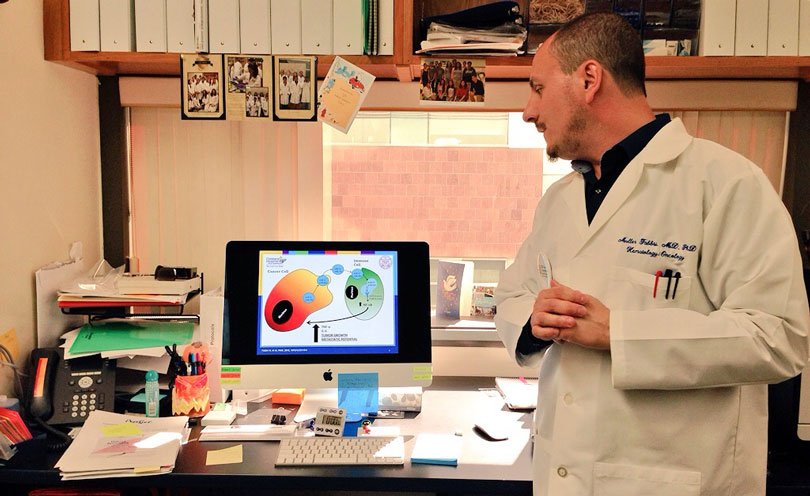 Dr. Fabbri explains his research to a visiting group of St. Baldrick’s staffers.

Years ago, over a salad and a carton of yogurt at a campus deli, Dr. Muller Fabbri had an idea.

The cancer researcher had been pondering developments in research on microRNA, which are molecules that regulate what genes do in the body.

He’d read a new paper that said these molecules could pass from cell to cell, and people had even found them circulating in cancer patients’ blood. Because of how they acted, microRNA reminded Dr. Fabbri of hormones, which got him thinking about how hormones communicate within the body.

Instead of discarding that thought along with his used napkin after lunch, Dr. Fabbri followed his curiosity.

He didn’t know it at the time, but that simple observation would lead to his discovery of a novel way to target neuroblastoma, a cancer found in nerve tissue outside the central nervous system. Within the microenvironment around a neuroblastoma cell, he found a communication loop that helps these cells survive chemotherapy.

“If cancer did not become resistant to the treatment we provide, essentially we would be able to cure cancer,” Dr. Fabbri said of the fundamental challenge addressed by his research. “The problem is, at some point, cancer cells are able to develop some way to resist the chemotherapy and to all the possible regimens we are giving. That is when we are in trouble, because at some point we don’t have any weapon anymore.”

During his St. Baldrick’s-funded research, Dr. Fabbri found that neuroblastoma cells send out envelopes of microRNA, or exosomes, which are then taken in by a certain type of immune cells which can help cancer, called tumor associated macrophages. (Dr. Fabbri refers to them as “bad guys.”) 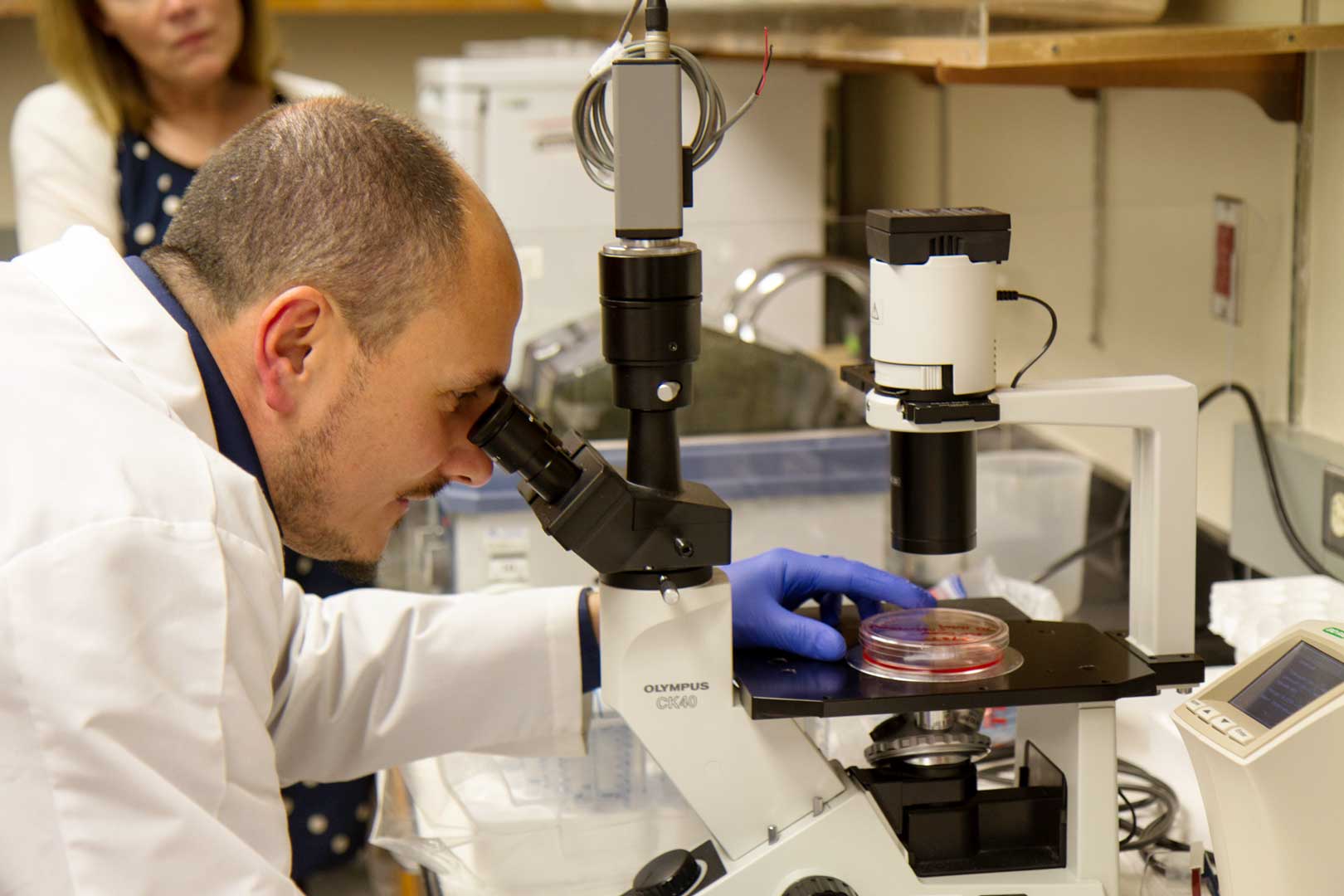 Dr. Fabbri looks at a petri dish of cells under a microscope.

Dr. Fabbri and his team at Children’s Hospital Los Angeles then discovered something extraordinary.

After getting the signal from the neuroblastoma cell, these macrophages then send out their own envelopes of a different microRNA. Once the cancer cell receives its package, this different microRNA goes to work, silencing a certain gene called TERF1. Once this gene is turned off, the tumor cell becomes resistant to chemotherapy.

The researchers had found a weakness in the neuroblastoma cell and potentially a way to make therapies work for kids with drug-resistant neuroblastoma. 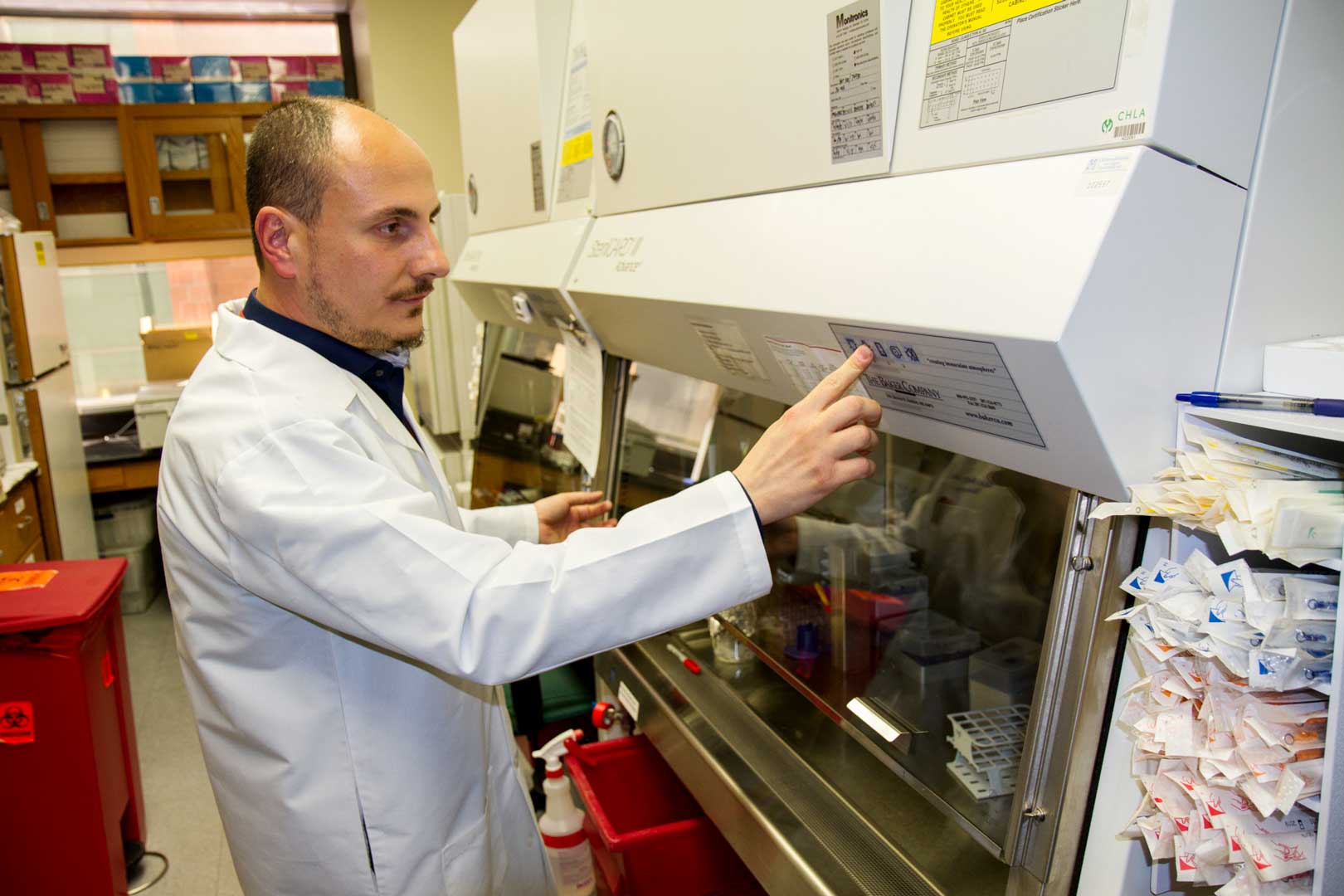 Dr. Fabbri demonstrates how a hood works to prevent contamination of samples.

“It’s very important, because now that we know that this mechanism even exists and we know exactly the name of the molecules that are involved, we can actually target the specific loop involving the crosstalk and interrupt this dialogue that the tumor enacts in its favor,” he said.

The researchers tried silencing the exosomes and then introduced chemotherapy. It worked — more cancer cells were killed by chemo when communication was blocked.

This idea has implications for cancers other than neuroblastoma. The researchers tested their hypothesis on different cancers, including lung cancer and medulloblastoma. In all cases, Dr. Fabbri said, the mechanism was confirmed.

“So it’s really broader than neuroblastoma,” he said. 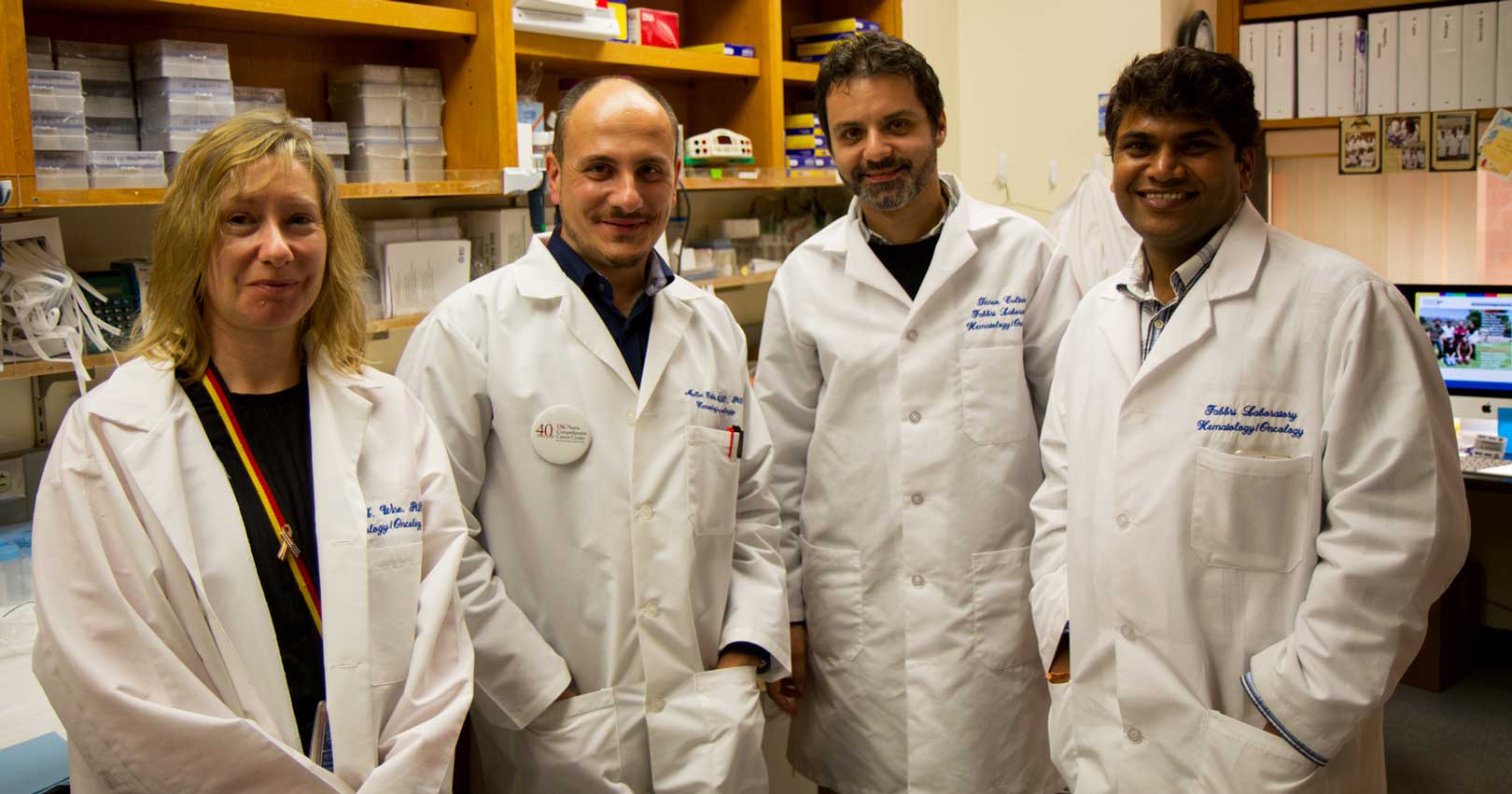 Dr. Fabbri stands with his team in his lab at Children’s Hospital Los Angeles.

The next steps are numerous for Dr. Fabbri and his team. They are looking at other ways to block the crosstalk between cells, as well as how to specifically block those “bad” exosomes and leave the good ones alone. Dr. Fabbri hopes to build a full-blown clinical trial off of these findings within the next five years.

“You know that you are not alone, that people really think that this is important. So it really is an injection of faith that you absolutely need at the beginning of your career,” he said. “To me, that’s what happened. It really was priceless.”

You make it possible for researchers like Dr. Fabbri to develop better, safer treatments for kids with cancer. Contribute to lifesaving research today.