There are things we can do that will increase our risk for cancer later in life, like tanning and smoking cigarettes. But childhood cancer is a different story.

Pediatric cancers are caused by genetic mutations. “However, since these mutations are unique to pediatric cancer, unique drugs need to be developed to treat these cancers,” explains Patrick Grohar, M.D., Ph.D., assistant professor of pediatric hematology-oncology at Vanderbilt University and a St. Baldrick’s research grant recipient.

Some cancers are characterized by a series of genetic mutations, but Ewing sarcoma tumors don’t have a lot of mutations, according to Dr. Grohar. His research is focused on one particular mutation called EWS-FLI1.

“This is really the key mutation,” Dr. Grohar explains. “We believe that it does everything that gives cancer a bad name: it causes the cells to grow in an unrestricted fashion, it causes them to spread throughout the body in a process called metastasis, and it also helps protect the cancer from chemotherapy.”

This mutation results from a chromosomal translocation, where a piece of a chromosome breaks off and changes places with another chromosome. So Dr. Grohar and his team turned their attention to a drug called trabectedin, which has proven successful in treating a variety of sarcomas that have chromosomal translocations. Trabectedin is used in treatment for soft tissue sarcomas in Europe, and it is currently in clinical trials for a variety of adult cancers in the United States.

In the past, trabectedin was given to kids in a Phase I clinical trial and it looked promising: Of the three patients with Ewing sarcoma enrolled in the trial, one had a complete elimination of his tumor and the others also had a positive response.

But the drug failed in the following Phase II clinical trial.

“We believe the reason it didn’t work is because it was too toxic,” Dr. Grohar says. 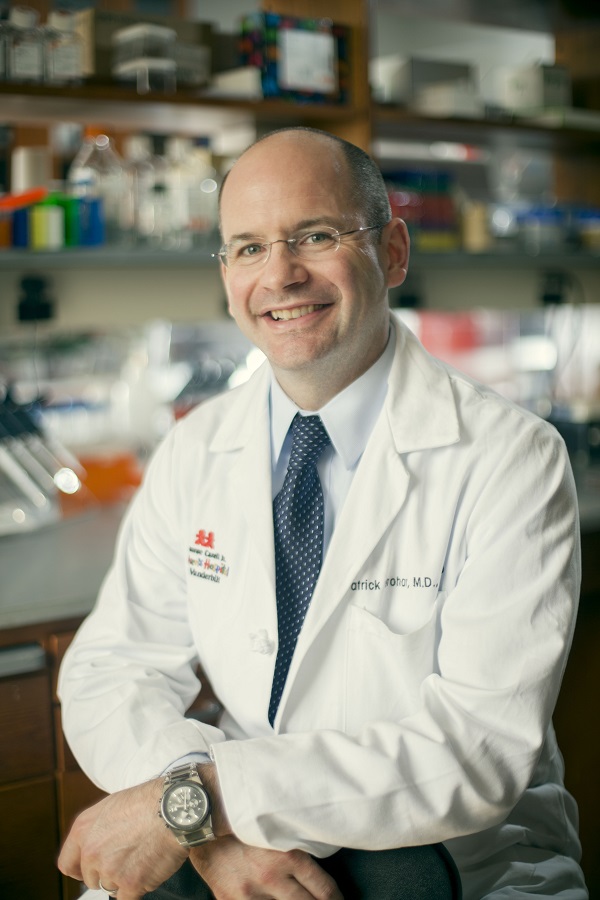 The goal in drug development is to strike a balance between efficacy and toxicity, Dr. Grohar explains. In other words, doctors need to be able to give the patient enough of the drug that it does what it’s supposed to do, but not so much that it poisons them.

While trabectedin was deemed not good enough to advance to the next phase of clinical trials, Dr. Grohar still felt there was something worth pursuing. So he asked PharmaMar, the company that developed trabectedin, if they had any other drugs similar to trabectedin that he could test to see if they worked better for Ewing sarcoma.

They did, and that’s how Dr. Grohar and his team identified a new compound that they have shown to be even more effective than trabectedin at suppressing the EWS-FLI1 gene mutation. PharmaMar was so encouraged by his results that they are now sponsoring the research and working with Dr. Grohar to prepare the drug for the clinic.

But they didn’t stop there. According to Dr. Grohar, one way to achieve the optimal balance between efficacy and toxicity is to come up with a new drug. “The other way is to combine two different compounds together that will accomplish the same thing.”

Irinotecan is a drug that is currently used in chemotherapy treatment for Ewing sarcoma. Like most chemotherapy drugs, it works by damaging the patient’s DNA. Of course, the idea is to damage the DNA of the cancer cells to stop the cancer growth, but the drugs cause harm to healthy parts of the body, too. But what if researchers could target the DNA damage specifically to the cancer cells?

“Your work and the money you raise truly can help improve survival for pediatric cancer,” Dr. Grohar says.

So far, results have been good — so good, in fact, that PharmaMar is sponsoring the rest of these preclinical studies as well. Dr. Grohar anticipates that they will be able to bring this novel combination therapy to patients in the clinic within a year.

He recently presented his results at the Rett Nearburg International Ewing Sarcoma Symposium, and his research was published in Clinical Cancer Research on November 25.

Dr. Grohar is excited to have a pharmaceutical company behind him now — it is rare for drug companies to invest in new therapies for pediatric cancer because drug development is so costly and childhood cancer drugs aren’t very profitable. Because of PharmaMar’s support, he is able to move forward with his research, but he couldn’t have gotten PharmaMar on board without the research funded by St. Baldrick’s.

Dr. Grohar wants the St. Baldrick’s Foundation and all their volunteers and supporters to know that their dedication is paying off.

“Pediatric cancers are different from adult cancers and therefore need their own set of drugs and drug combinations to treat them. The development of these approaches costs a substantial amount of money that in the current economic climate is hard to come by,” he says. “Your work and the money you raise truly can help improve survival for pediatric cancer.”