It’s been three years since we first reported on a new treatment for neuroblastoma called MIBG therapy. Since then, a lot has changed and even more exciting developments are on the horizon. Here’s an update. 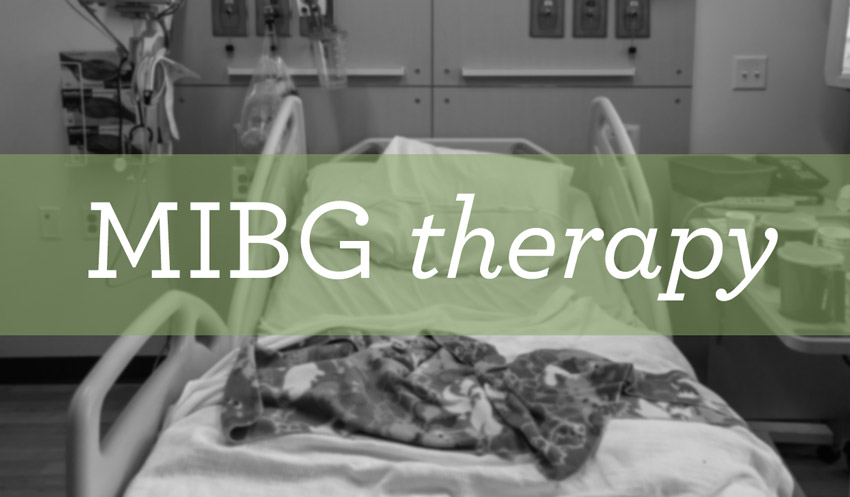 In MIBG therapy, a child is given an infusion of a radioactive iodine coupled with MIBG, a molecule which is absorbed by neuroblastoma cells. The MIBG molecule is taken up by the tumor cells and the radioactive iodine goes to work, killing the cancer.

Just a few short years ago, this therapy was hard to come by for kids with neuroblastoma. The trickiness of dealing with the radiation meant that just a few institutions offered it. For some families, hours of travel were needed to get their child access to the treatment.

That’s changed in a big way.

MIBG therapy has made huge strides, with many more institutions capable of infusing MIBG, said Dr. Kate Matthay of the UCSF School of Medicine.

“There are now probably at least 15 places in North America that are doing this, or are capable of doing this, and maybe a couple more are working on it,” she said. Since 2007, St. Baldrick’s infrastructure grants have helped three institutions in the United States open MIBG programs.

Dr. Matthay and other colleagues in the St. Baldrick’s-funded NANT (New Approaches to Neuroblastoma Therapy) Consortium just completed a clinical trial that looked at using a drug called vorinostat during MIBG treatment. Vorinostat both sensitizes the cancer cells to the radiation and causes the cells to take up more MIBG. In an important step forward, researchers found that their young patients handled the combination of treatments well.

Now the researchers are grappling with the next question: Does using vorinostat and drugs like it with MIBG help more kids with high-risk neuroblastoma survive their disease? Or is MIBG more effective alone?

Kids with high-risk neuroblastoma have few, if any, options for treatment and that’s precisely why research into MIBG and therapies like it is so necessary.

“It’s important because about 20% of kids with high-risk neuroblastoma don’t ever respond to their induction chemotherapy — they’re resistant,” she said. “So we need new targeted agents.”

Dr. Matthay explained that though it’s not necessarily new, MIBG fits that bill. It specifically attacks neuroblastoma cells, unlike chemotherapy, which affects the whole body. And MIBG therapy doesn’t carry all of the side effects of traditional radiation, which has to pass through tissues to get to the cancer.

“It also has had, in relapsed children, the highest response rate we’ve seen for any new agent,” she said.

That doesn’t mean the treatment is without its own side effects and challenges.

Because of safety concerns, kids undergoing the therapy are required to stay in a special room alone until their radiation levels fall below a certain threshold. That can be challenging for any child, but especially for infants who rely on a parent’s constant care. Dr. Matthay and her colleagues are looking at ways to lessen stress on babies while they go through the procedure.

Read about Justin’s four days in isolation during MIBG treatment >

Also, although MIBG therapy shows fewer toxic effects than high-dose induction chemotherapy, Dr. Matthay said, researchers don’t know enough about its long-term impact, which is why another study is following up with patients years after their MIBG therapy.

“It took a long time, since I started using this in 1986,” she said of the progress of research into MIBG. “But I think we’re getting there.”

Dr. Matthay was grateful to St. Baldrick’s and organizations like it, which make these leaps forward possible in the face of scarce federal funding. She’s hopeful for continued support for childhood cancer research.

Give
Read more on the St. Baldrick’s blog:
neuroblastoma