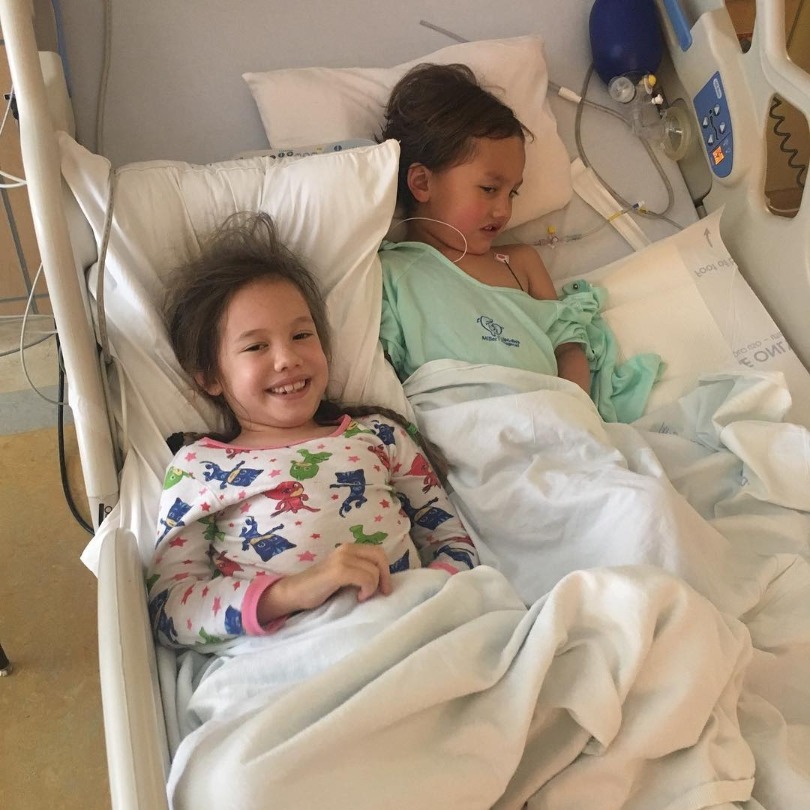 Kalea and Noah snuggle in one hospital bed during treatment.

From waking up in the morning to getting tucked in at night, siblings Noah and Kalea were practically inseparable.

They’d eat their breakfast together – whatever 6-year-old Kalea had, 4-year-old Noah wanted too – and brush their teeth together. The two kids would get so immersed in playing together, and so quiet, that their parents, Duncan and Nohea, would get nervous and go check on them. Inevitably, the adults would interrupt some elaborate imaginary adventure and the kids would shoo them away.

“Noah looks up to his big sister and wanted to be like her. She got into skateboarding, so he did it and she did soccer, so he wants to,” Duncan said. “Whatever she did, that’s what he wanted to do.”

So, when Noah’s big sister was diagnosed with a brain tumor and Noah started complaining of headaches in the same spot, his parents thought he was just missing his best buddy.

But then there was his gait. Suddenly, when he walked, he’d lean to the right. At Kalea’s next appointment, Duncan asked the neurologist to watch Noah walk down the hallway. As the little boy put his feet down, step over step, the neurologist’s face spoke volumes – that something was not normal. It was probably nothing, the doctor said, but he put in an urgent order for an MRI for Noah.

“It was almost like, we didn’t even fathom. It was so crazy to imagine that our daughter has brain cancer, has a tumor, you don’t even register that their sibling could have it,” Duncan said. “The brain tumor didn’t even cross our mind. There’s something going on but it’s not a tumor. We just know that it’s not going to be because it can’t happen.” 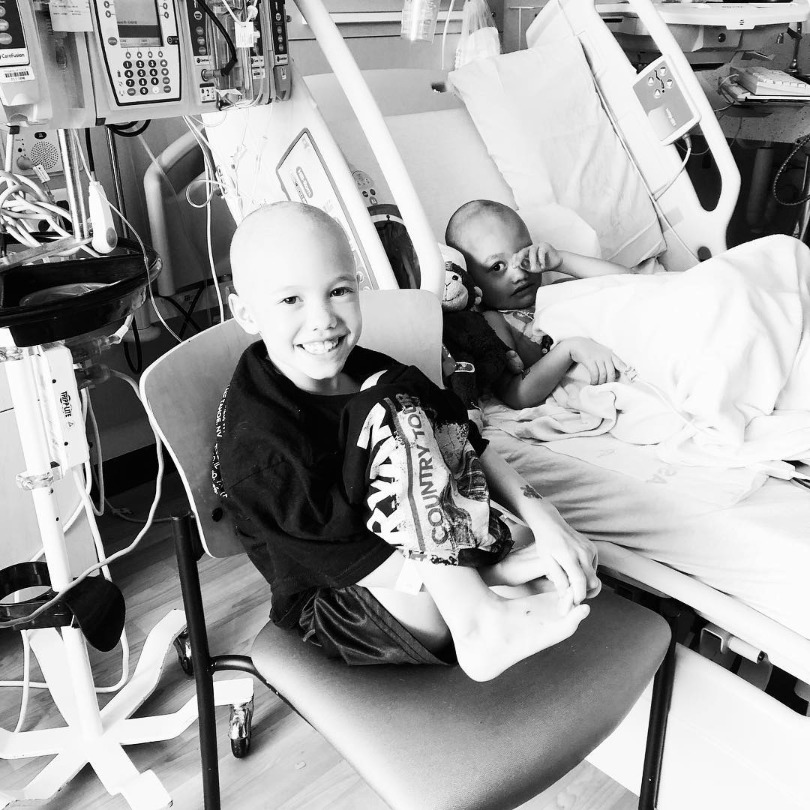 Noah and Kalea hang out together at the hospital during treatment.

“My wife stayed with my son in the emergency room and I walked back up to stay with my daughter and one of the nurses was like, ‘How did the results come back?’ And I started crying and I told her,” Duncan said. “It was disbelief because it’s never happened before. There have never been two siblings diagnosed at the same time with a medulloblastoma tumor. It was hard to comprehend that it was happening to us.” 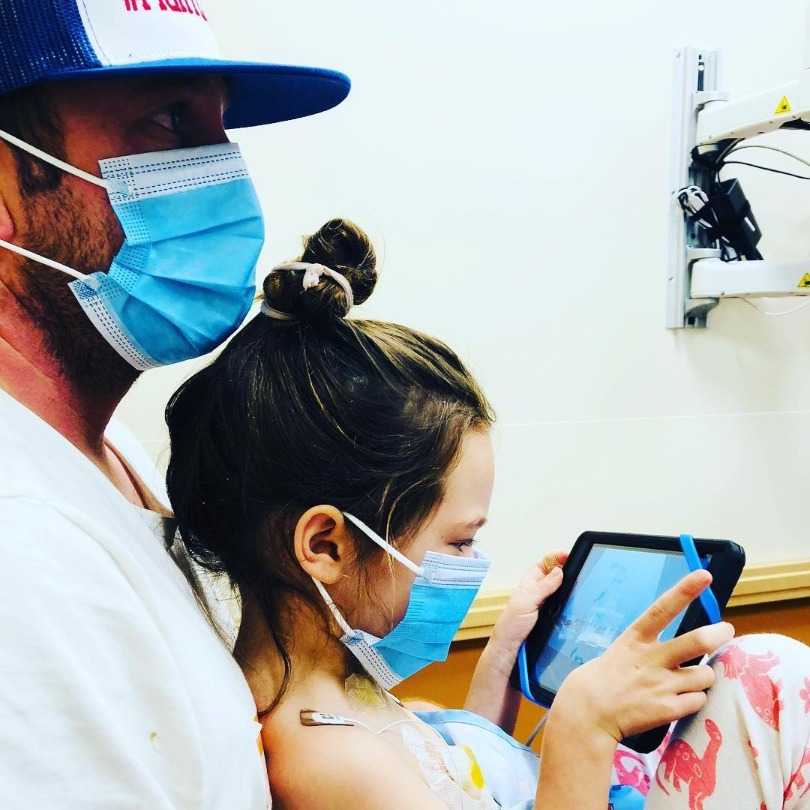 Duncan holds his daughter tight at her radiation appointment.

In the first step to a positive prognosis, both siblings’ tumors were successfully removed in brain surgery. They are now on different treatment plans because of their ages, and they’re hanging in there.

“It breaks your heart when you hear them talking to each other, ‘When we’re not sick anymore, we’re going to go to Disneyland,’ or whatever, you know? Just talking about things they’ll do, because they know they’re sick and they can’t do what everyone else does,” Duncan said.

On the good days, Duncan and Nohea try to keep life as normal as possible for the two kids. On bad days, they hold them and love them as much as they can.

“You know, you think about if your kid has a cold or a fever or a cut, what do we have to do? How do we make them feel better? Now times that by a million with trying to fight cancer, knowing that so much of it is out of your hands,” Duncan said. 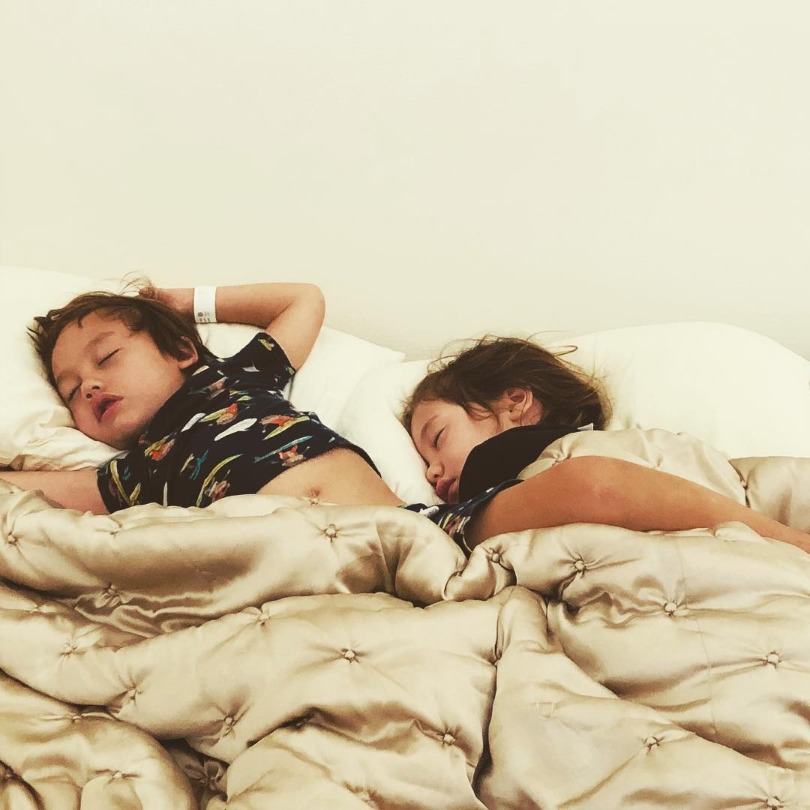 Noah and Kalea get some much-needed rest during treatment for medulloblastoma. The siblings will face long-term effects from the surgery and intense treatment. “As parents, it’s like, are these going to be the same kids we raised for our whole lives? And that’s a hard thing,” Duncan said. “… Whatever happens is how it works.”

Duncan and his wife want answers. And so far, they haven’t gotten any. The twin tumors are still a mystery. Doctors tested the tumors for genetic abnormalities and found nothing. The doctors also assured the family that the cause wasn’t environmental. The cause is still a mystery.

That’s why pediatric brain cancer research is important to Duncan and Nohea, and that’s why they support St. Baldrick’s. Over the years, St. Baldrick’s has funded $12.8 million toward medulloblastoma research.

St. Baldrick’s and the National Brain Tumor Society have partnered to make progress for kids with brain cancer >

“Knowing that our kids are hopefully going to give groundwork and give information to help future kids — that means a lot to our family,” Duncan said.

Contributing to research is the Avery family’s silver lining. According to Duncan, samples of Noah and Kalea’s tumors have been sent to labs for study and scientific articles are going to be published about their unique situation.

“If the reason we’re put on this earth is to help give answers then hey, that’s something that we can try to embrace to help the process,” he said.

Together we can take childhood back from cancer for sisters and brothers everywhere. Fund lifesaving research today.

Give
Read more on the St. Baldrick’s blog:
medulloblastoma