New Discovery May Hold the Key to Destroying Osteosarcoma Osteosarcoma is a devastating pediatric bone cancer for which survival rates have not improved in over 30 years. Despite advances in chemotherapy and surgery, 40% of osteosarcoma patients eventually succumb to the disease. However, a recent research study, funded in part by the St. Baldrick’s Foundation, has identified a new gene called Sox2 that may hold the key to eradicating the tumor and preventing relapse of this aggressive type of childhood cancer.

Sox2 is a gene that is required to keep normal bone cells young and immature to encourage their growth. As a result, normal bone stem cells depend on Sox2 for survival. Osteosarcomas are also dependent on Sox2.

“We found when we knocked Sox2 down that the osteosarcoma cells actually behaved like normal bone cells,” said Dr. Alka Mansukhani, St. Baldrick’s Research Grant recipient, whose highly praised work was recently published in Oncogene, one of the world’s leading cancer journals. “This was a very exciting finding that St. Baldrick’s was instrumental in helping me pull together.” 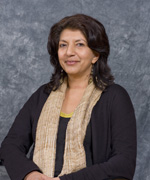 Osteosarcoma is usually a pediatric cancer, affecting adolescents right when they are gaining height and their bones are developing rapidly. Young patients would often feel pain in their leg, hip, thigh or ankle. Since it is normal for adolescents to experience growing pains, they usually don’t complain until the pain becomes relatively chronic, when they’re taken in for diagnosis.

“On diagnosis, the tumor is usually quite aggressive and at a very advanced stage,” said Mansukhani. “It would need drastic surgical intervention, which can often result in losing a limb. Even with treatment, the rate of relapse is very high and the outcomes are often not good.”
So, how will the discovery of Sox2 help? Mansukhani proposes 2 ways:

1) Since osteosarcoma is often diagnosed late in adolescents, resulting in aggressive treatments, Mansukhani and her team are studying how Sox2 might be used as an early sign of osteosarcoma.

2) Mansukhani is also analyzing drugs that would have the ability to suppress Sox2 and osteosarcoma cancer cells. “It’s a little early to predict, but the best case scenario is that we would actually be able to shrink osteosarcoma without radical, surgical intervention, preventing limb amputations in young patients.”

Overall, Mansukhani believes that this important study will provide a new avenue for the targeted treatment of osteosarcoma and lead to a better understanding of the cancer stem cells that give rise to tumors. A publication on osteosarcoma stem cells will appear in Cancer Letters, another leading cancer research journal. “St. Baldrick’s help has been critical in this study,” shared Mansukhani. “Each donation is like a brick and every little bit counts as we all help in building the structure that will lead to a cure for childhood cancer.”