Memory of the Summer Olympics (and Childhood Cancer) I was feelin’ a little “off” earlier this week.

I was in our kitchen making hair bows.

I was watching the Olympics on TV.

I felt nauseous with worry.

What is my problem?

A big cancer magnet fell off of our magnetic chalkboard and onto the floor.

I picked it up and put it back.

I returned to making hair bows and the Olympics.

Anna came into the kitchen.

“Mom, remember when Sara had cancer and you would give her those shots all of the time — what were they called?”

Remembering ever so not-fondly, I said, “Neupogen.”

I returned to making hair bows and the Olympics.

The Summer Olympics are every four years.

A segment of the Olympic coverage rattled off a bunch of pop culture and world affairs that were current four years ago.

I listened and made hair bows.

I thought…What were we doing in August 2008? 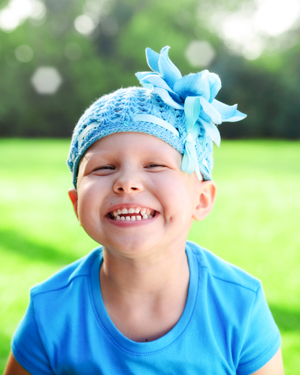 Me and Sara … we had a routine.

I was making hair bows to sell at a craft show.

Sara felt normal during the day, but would get a fever at night.

I remember making hair bows and Sara lying on the couch.

I remember giving her grape Tylenol — on a nightly basis.

I remember feeling like something was looming over us.

Honest to God, I do.

My mom brain wanted to believe it was viral.

My mom heart began preparing itself.

Amazing what your body does for you and to you.

November 2008, Sara was diagnosed with Stage IV Wilms tumor with metastasis to her liver and lungs.

We were given this little voice inside our head for a reason.

Like any other body part, it has a function —

to steer you in the right direction.

There is a catch though …

You must be still enough, for long enough, to hear this little voice inside your head.

You must be willing to accept what your intuition has to tell you,

even if it’s not what you want to hear.

I knew Sara had cancer, but

I didn’t want to welcome cancer into our family’s home.

I refused to listen to the little voice inside my head.

I’ve accepted that to heal, I have to remember and process.

I never feel like, “Hey! Let’s hash through some cancer memories!”

But, my brain insists upon it.

My heart trusts my brain and goes along — with its arms folded and a snotty look on its face.

Deal with it and move on.

I was immediately feelin’ lighter and relieved.

Digesting life — chewing it up, grabbing all of the smiles and spitting it out …

one memory at a time.

The Olympics saved me a $20 psychologist co-pay!