Caemon was a happy, inquisitive child, full of energy and love. Not even childhood cancer could change that. “He was a boy who was ready to live, and whether at home or at the children’s hospital, he was going to keep making meaning of his life,” writes his mom, Timaree. She tells his story below. 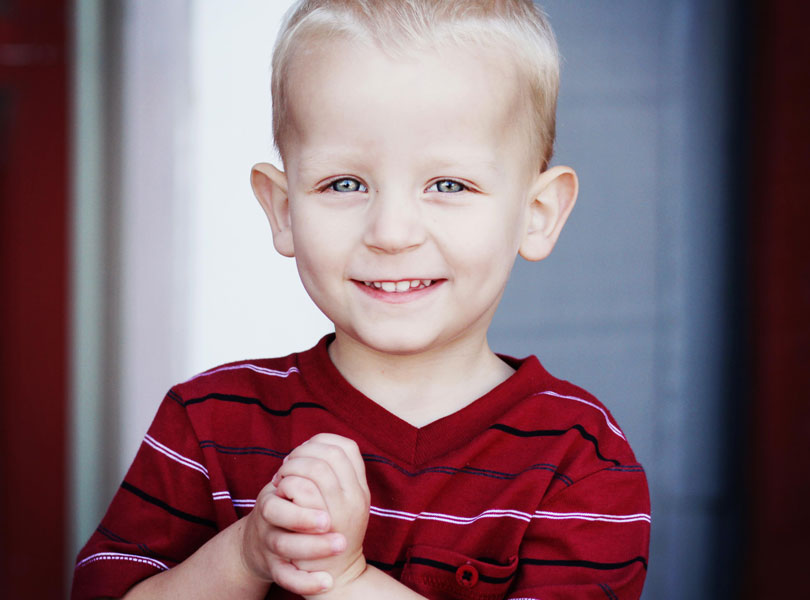 On a sunny afternoon in September 2009, my wife and I, a couple for 11 years, were transformed into a family with the birth of our son Caemon.

He looked nothing like we expected with his downy blonde hair and Pacific Ocean eyes, and in an instant, we knew that any expectations we had of this chubby little cherub had to be released. The only certainty was that after two years of trying so hard to make a family, our son was finally here. He was ours to cherish, and cherish him we did.

New-parent bias certainly colored how we looked at Caemon, but to us, and to most who met him, he was a magical, funny, precocious child. His curiosity and wonder seemed to know no bounds and led him to want to be involved in everything we did. 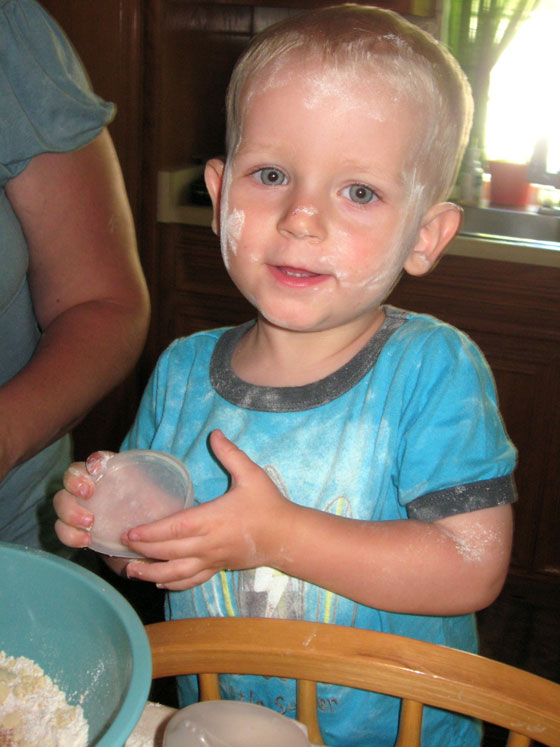 Caemon loved to get his hands (and face) dirty while baking.

If I was baking, he wanted to help. If I was using a new tool, he wanted to know how it worked (or, perhaps, to dance with it). Every new experience Caemon encountered was something he wanted to figure out so that he could “do it his own self.”

And that he did. He learned to bake with me when he was barely 2. He gardened with us, planting flower bulbs and tomatoes and peas. He helped with the laundry, made coffee and tea with us in the mornings, selected his own music and stories, and even began reciting most of his favorite books from memory, giving the impression he was reading.

Our family life was as full as it could be with Caemon as its sun, my wife and I happily orbiting around this wondrous soul, eager to see what he would do or say next.

But while our first couple of years with him had been magical, it seemed every major event was also punctuated with an illness — from countless ear infections to pneumonia to mystery bugs that simply made him feel terrible. Caemon was sick a lot, and in the weeks just before his third birthday, it was a strange symptomless ailment and a severe reaction to an antibiotic that finally got a doctor to take a closer look. 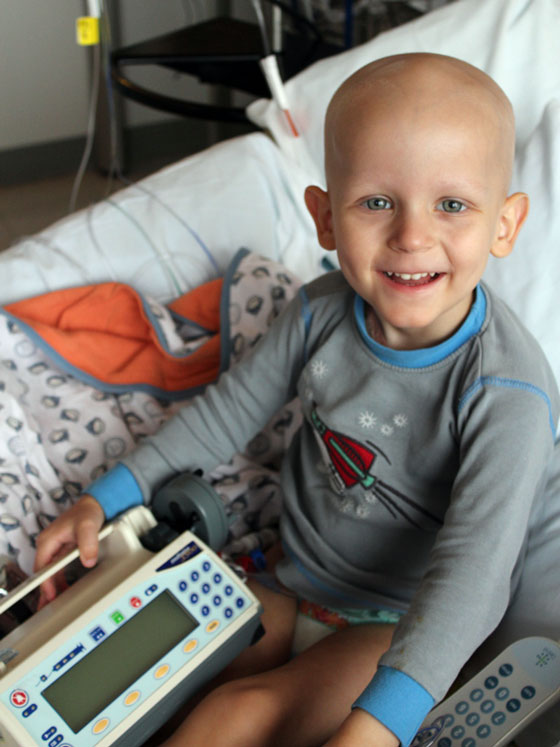 Caemon was always quick to smile.

After finding his spleen and liver to be alarmingly large and seeing the strange bruises all over his body, she sent him for blood tests, the results of which would forever rock us off of our orbits. In the course of a short phone conversation with the pediatrician, our son went from an almost-3-year-old with a sluggish immune system to a boy who very likely had leukemia.

The ambulance ride to UCSF Children’s Hospital, the room on the pediatric oncology wing, the breathing treatments and platelet transfusions and hushed talks with doctors in the hallway only served to heighten the terror my wife and I felt upon first hearing that “L” word. But “leukemia,” we learned, was not as bad as it could get.

Caemon had the rare juvenile myelomonocytic leukemia (JMML) — a sort of leukemia that was going to be hard to treat and nearly impossible to cure without a bone marrow transplant. Perhaps it should not have surprised us that our unique little boy would have a one-in-a-million type of cancer, but it did.

The JMML diagnosis was terrifying, but Caemon was still Caemon, even in a hospital bed attached to tubes and pumps and monitors. And as he began to feel a little better from the transfusions, it became clear that our world would have to shift to the hospital. Now more than ever, our time with our son was precious, and while we had every hope that he would live to see JMML in his rearview mirror, we weren’t going to waste time with percentages and statistics when our boy was our statistic of one — our singular focus and greatest love.

Caemon’s disease proved to be a formidable opponent with surprises around every corner. It didn’t respond to the normal JMML protocol, so the treatment was intense. It meant months in the hospital, strong chemotherapy, and eventually a bone marrow transplant.

And while we all certainly had to adjust to this new life, we also had to take Caemon’s lead. He was a boy who was ready to live, and whether at home or at the children’s hospital, he was going to keep making meaning of his life. 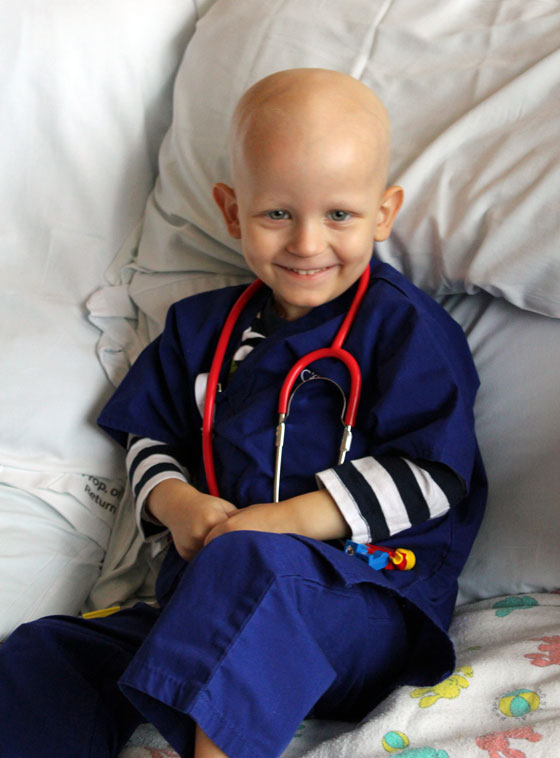 Caemon threw himself into medical play, and insisted on giving his mama and me PICC lines and dressing changes, all the while reassuring us that the procedures wouldn’t hurt. He charmed everyone who entered his room with this vocabulary and knowledge of worlds beyond most three-year-olds’ grasps.

One day, when his dietician came to talk about getting him to gain weight, and she mentioned avocados, Caemon chimed in with his guacamole recipe, listing off ingredients like lime and cumin. 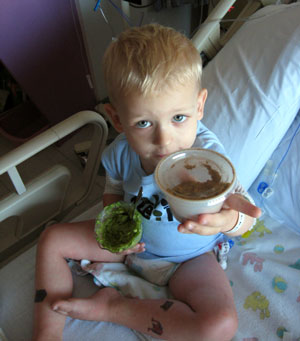 “Did you just say ‘cumin’?” she asked him, completely astonished. He nodded and rattled off the rest of the ingredients.

The next day, she surprised him with all of his ingredients, and together, he and I “cooked” in the hospital just as we did at home — and he ate every bite of his guacamole, a proud smile glimmering in his eyes, tears glistening in mine.

We had many moments like these during the months he spent confined to his hospital room because we were determined to help our son maintain who he was, to help him continue growing and learning.

He wasn’t a passive child content with television and video games. He needed to explore and discover and create, and if that meant making banana cream pies out of ingredients from the hospital kitchen, or learning every function of a syringe pump, or taking a break from his medical play to dance with his moms to a favorite song, then that was what he — and we — were going to do.

For us, his cancer diagnosis couldn’t be a death sentence. It just meant every moment counted all the more. Between Caemon’s brilliant life force and our intense love for our son, we were sure he could beat his disease.

But a month after Caemon’s bone marrow transplant — five months into his treatment — we learned that he had relapsed. His transplant had failed, and JMML was ravaging his little body.

Caemon stayed in the hospital as his team tried a few last-ditch efforts to get him healthy enough for another transplant. We couldn’t lose all hope, not yet. Everyone in his circle believed that if anyone could beat this, Caemon could. 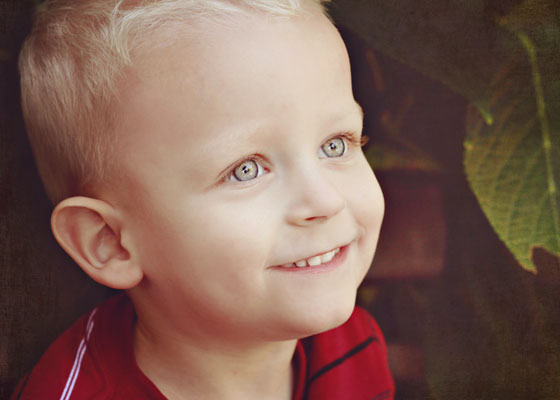 We had always stayed close to Caemon in the hospital, but with the relapse, neither my wife nor I could leave his side for more than a moment. His nurses found us a giant hospital bed where we could all lie together, enjoying our family, hoping that if anything, the immense love we all shared would heal him.

And as awful as he felt, Caemon continued to be his loving, too-wise self. He insisted that those visiting lie in his bed with him. He began telling us he loved us without prompting, holding us in the crook of his arm like a grown man.

Even as our 3-year-old son lie dying in his bed, he was bringing us light and joy and smiles — and comfort.

On the last night of his life, Caemon ate nachos (his favorite) and chocolate brought by his doctor from England. As he struggled to breathe, he asked to hear his favorite Jack Johnson songs. He wanted us to read his most beloved books. We sang and held our son, swayed with him in his bed, told him stories, kissed his perfect face. 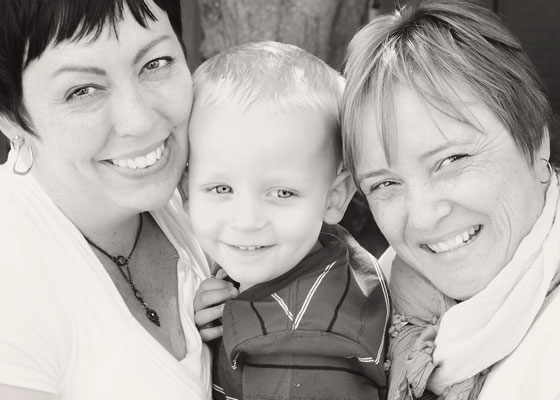 We didn’t know he was dying, that this was his last night, but it seems he did. Perhaps an hour before he took his final breaths, he struggled through his oxygen mask to tell his mama and then me that he loved us, wrapping his little arms around our necks for what would be our last hugs. And by morning, the light of our glorious son had gone.

My wife and I had exactly three years and five months with Caemon before JMML took him. Cancer made our experiences with our son finite: we had a fixed number of hugs and kisses, a limit to the times we could hear his glorious laugh, a maximum set of memories we could make as a family.

And while nothing can dull the pain of a lost future with our son, there is beauty in knowing that every one of those days Caemon was on this earth mattered, that in loving and raising our boy, in honoring him for the beautiful soul he was, we truly did make every moment count.

Caemon’s family and friends are raising money to help kids like him get the cures they need. Read more about Caemon and make a donation on his Hero Fund Page.