Kate Returns to Gymnastics After Losing Her Leg to Childhood Cancer

When Kate lost her left leg to childhood cancer, she wondered if her days as a gymnast were over. But even cancer couldn’t keep Kate from the sport she loves. Read the latest update on Kate here. 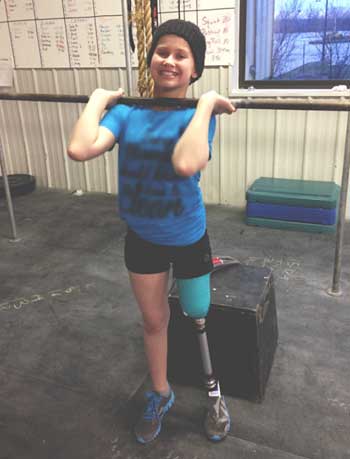 Kate regains her strength at a CrossFit gym in 2013, after her second bone marrow transplant for AML, a type of childhood cancer.

For that exercise, she grabs onto a pair of rings suspended from the ceiling at her local Illinois CrossFit gym and lifts herself into a pull-up position. Then she pushes herself up until her arms are straight. She’s also got a soft spot for handstand push-ups and for pull-ups, with a personal record of 30.

Usually she’ll wear her prosthetic leg when she’s working out. For certain exercises, she’ll take it off if it gets in the way.

Three years ago, the 15-year-old gymnast and CrossFitter was diagnosed with acute myeloid leukemia.

It all started when Kate became ill after Thanksgiving dinner in 2010. She felt like she had a never-ending flu bug and was tired all the time. Around New Year’s she started bruising easily, but that didn’t seem too out of the ordinary, because she was so active. Then came the staph infections in her toes, her eye, and her knee.

“We weren’t really sure what was going on, and I was still tired and bruising, and it was all just kind of downhill,” Kate said.

On May 20, 2011, Kate’s mother, Barb, showed up early at her gymnastics practice. When Kate came downstairs from dance class, she saw her mother and coach talking. Their faces were serious. That’s when Kate started to worry.

As they were leaving, Barb told Kate that she had leukemia.

“I didn’t really know what that was. So I Googled it in the car, which you’re actually not supposed to do, because the Internet always makes it seem worse than it is,” Kate said, giggling. “But there was also a sort of relief in knowing what was wrong with me, because we’d spent all year trying to figure it out, and finally we had an answer.” 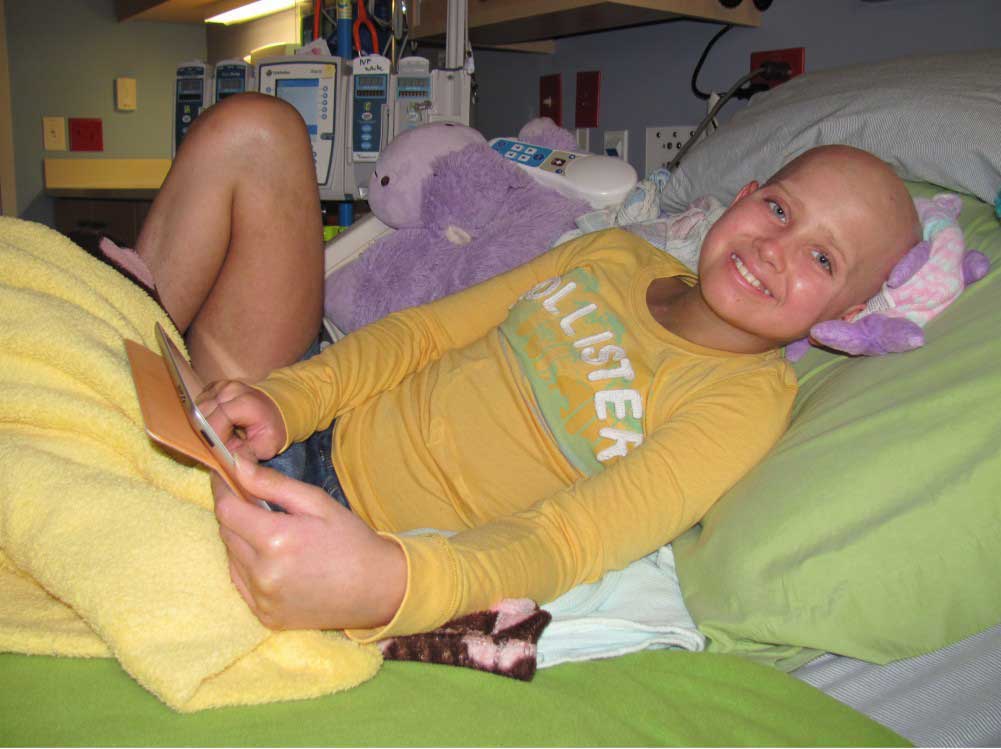 Then, on the morning she was to receive her little sister’s healthy bone marrow, doctors found an infection in her knee joint. She had already endured gangrene, a fungal infection, and cadaver skin grafts. For the bone marrow transplant to have the best chance of sticking, Kate’s leg would need to be amputated above the infected knee.

Kate had been doing CrossFit since she was 7 years old. She was also a competitive gymnast. How would she do the activities she loved without her leg? 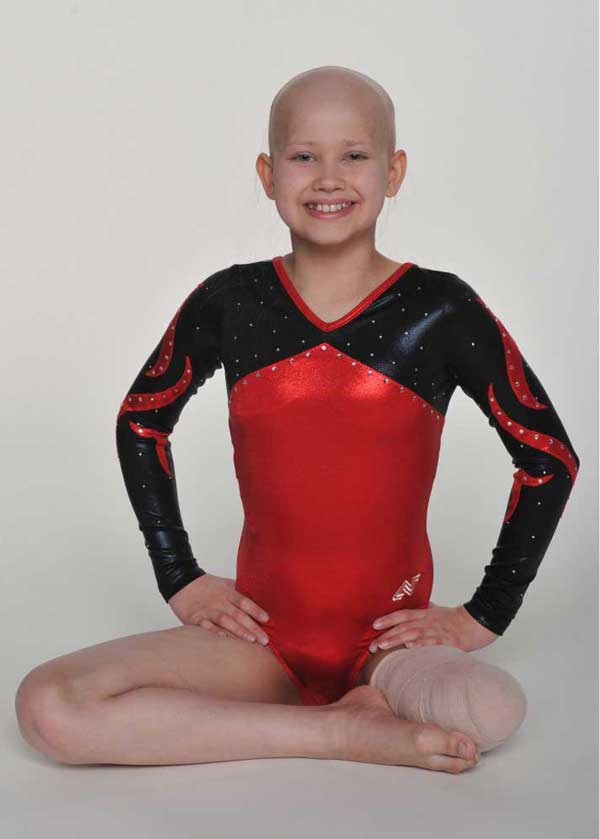 Kate poses in her gymnastics uniform in 2012.

Her first reaction was, “No way, you’re not doing that to me.” But she realized there wasn’t much of a choice.

“In the back of our minds, we knew we had to, in order to give the bone marrow transplant the best chance of succeeding,” Kate said.

Kate came home from the hospital just in time for Christmas and remained in remission until October 2012. Then the Fosters got the news that no family should have to hear.

“We went for a doctor’s visit and it was back. I had relapsed,” Kate said. She cried on the car ride home as she thought about starting over with treatment.

This time, Kate’s doctors tried something new, a drug called plerixafor. Kate was part of just the third round of kids to receive the trial drug, which works with chemotherapy to wipe the bone marrow clean and pave the way for a transplant. Kate’s second bone marrow transplant was a success, and she has been in remission for 20 months.

Kate and her family have been active supporters of children’s cancer research since Kate’s diagnosis.

“The more advanced research that goes on, the better chance I have to not have to go through this again,” Kate said.

As an Honored Kid, Kate spoke at a St. Baldrick’s event and shaved her dad’s head for the cause. 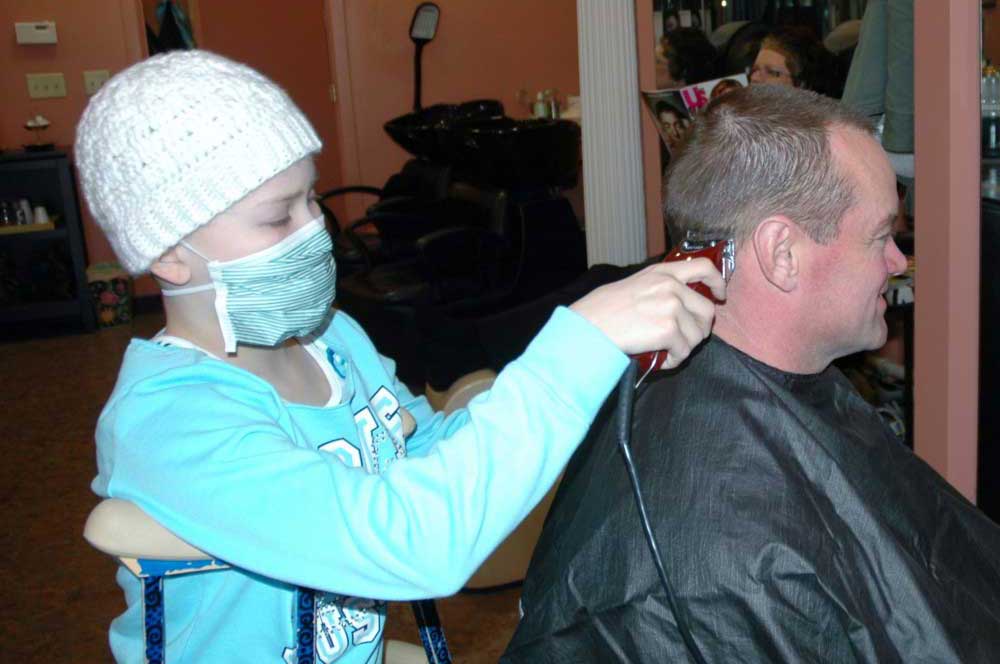 Kate shaves her dad’s head during a St. Baldrick’s fundraiser. “The more advanced research that goes on, the better chance I have to not go through this again,” Kate said.

Now, her sophomore year of high school is right around the corner, and Kate is soaking up the last bit of summertime. She is back in the gym and practicing gymnastics five days a week.

“I am feeling fantastic now,” she said, emphasizing every word. “Enjoying summer, getting tan, going to practice. It’s amazing.”

You help kids like Kate pursue their dreams. Donate now.