Follow Justin’s four-day experience with MIBG therapy, an up-and-coming treatment for advanced-stage neuroblastoma. This therapy involves radiation and requires Justin to stay in a lead-lined room, alone, until his radioactive levels have lowered. Justin is battling childhood cancer for the fifth time and is a St. Baldrick’s Foundation 2012 Ambassador Kid. The updates below have been provided by Justin’s mother, Lori. 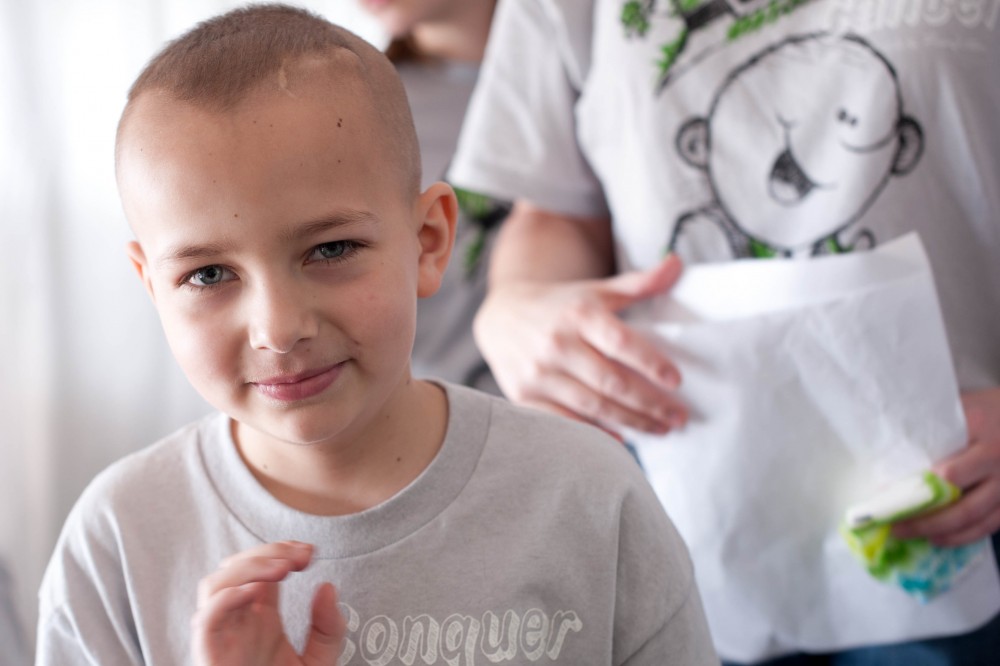 We are all checked in. Justin is still in good spirits. Slowly the room is becoming a bit overwhelming. Justin is in his position on the bed. We are, too, on our side of the room.

At this point we are waiting for the lead shields to be moved in — they are in the hallway — which will separate us for the next four days. There is a huge box labeled “radioactive” awaiting placement of Justin’s output. The trash can also says “radioactive.” We are still waiting for the radiation team to visit, but as things get set up, we are pretty sure of the gist of the next few days.

Justin’s procedure went well this morning, but now he is complaining about the catheter. We haven’t even started and he is complaining, so hopefully that is not a preview of the next few days. Please say a quick prayer that Justin handles this all very well. His BFF back at home is even down in the dumps, so please say a prayer for him as well. They need each other.

The infusion went well. A “robot” gave Justin the injection. It was pretty cool for him, to say the least. There were five doctors and us in the room and once the injection started, we all had to clear the room. Justin handled it pretty well and even fell asleep for a little while during the 24-minute infusion.

Justin also enjoys the radioactive beeping that initiates from my dosimeter when I get too close. He thinks that is pretty cool. Unfortunately his spit doesn’t glow in the dark — that was a big disappointment to him.

In addition to not glowing in the dark, he is having terrible anxiety with all of this. I wasn’t prepared for the lack of touch part of this whole thing. During the last six years of treatment, hugging, cuddling, rocking, and rubbing have been part of his soothing and calming process. We don’t have that now. I can’t touch him and anything he touches has to be discarded. We knew that going in, but he decided that he didn’t need a back-up “blinkie” for twirling and keeping him calm. He didn’t want to have to throw away any of his blinkies.

Well, that was a bad call on my part, and I should have been prepared. He has resorted to crying, chanting that he feels like a “caged animal” (he is boxed into the lead shields) and raising his bed up and down.

Jeff was on a frantic look at the Ronald McDonald House for a blanket at 10:30 p.m. last night. They have also given Justin anxiety meds. It’s all so overwhelming to him; even though he was prepared, we just missed the mark.

All in all, the treatment infusion went great. We will get this other part worked out, and he will end up having a good rest of the week.

Justin is much better today.

The night was pretty rough — vomiting and some jaw pain (both known side effects of the treatment). But we worked through it, got some pain medicine and ice packs, and that seemed to calm him enough to finally fall asleep under a new “blinkie” the Ronald McDonald House gave to Jeff. He was finally asleep by 2 a.m.

Today he is more chatty and has a much better disposition. He still has jaw pain, but the ice packs are very helpful in minimizing the pain. He is no longer chanting, and the bed is only being raised in order for him to get a better sitting position.

We are waiting for the radiation team to come in and do their measuring. Justin is still in isolation behind the lead shields. We can talk to him, though, and see him if we need to or if he wants us. The TV controls are on our side of the room, so he sees us when we change out the movies. He has just finished Harry Potter 4.

We test on Friday, Saturday, and Monday to see what this treatment is doing to his cancer. Please continue prayers for improvement.

Justin is still doing well. He is almost back to his normal, goofy self.

This morning brought more vomiting, but it was quickly controlled. It also brought a glimpse of almost-freedom.

His radioactive emission number has dropped significantly. It started in the thousands range and as of this morning it was down to 11. They were hopeful that he would get below 7 in this afternoon’s read. Unfortunately, he didn’t, and was very disappointed that he couldn’t leave. His buddy Ben is here now, and he doesn’t want to waste any precious time with Ben. There was a bit of crying, but he worked through it with the fifth Harry Potter movie and a promise of spending weekend time with Ben.

Tomorrow we should be released. He has three days of tests — Friday, Saturday, and Monday. If all is well, he will be cleared to leave on Tuesday and hopefully back on our home turf in Colorado on Wednesday. Then school on Thursday and FIELD DAY on Friday — priorities, I know. He hasn’t gone to school for months, but he makes it back for the choir performance, field day, and of course the last day of third grade.

The doctors say the next few weeks between the two therapies should be pretty good and his quality of life should be awesome. So we will take advantage of that. June should be a busy month: a week of school, a week of cancer camp, a week of relaxing at home, and then we are off on a little much needed R&R with his buddy Carter and his family. Then we head back to New York for round two of this therapy.

Justin is soon to be back to his old dancing self ….

The “caged animal” is being released.

Justin passed the radiation test this morning and has been cleared to leave, not a minute too soon, either. He has been having catheter issues and we think it is on its last leg. So instead of repairing it, they are just going to pull it. He would be excited, but he is still sleeping … because, according to Justin, he had been a — ready for this? — “caged party animal.”

Anyhow, just waiting for our schedule for the next few days and then we are out of here and marching back to the Ronald McDonald House. Hopefully it’s not raining.

Thanks for your prayers. It’s going to be a good day.

Learn more about MIBG therapy on the St. Baldrick’s blog.

The St. Baldrick’s Foundation funds childhood cancer research so that more kids can fight back against their disease — and win. Make a donation today.