I did this for my brother Ollie

Ollie was like any other little brother, annoying at times, cheeky all the time, and pretty much my best friend.

He absolutely loved trains. We would make train sets the size of the entire living room. For us, nothing really changed when we discovered that Ollie had a brain tumor, a type of childhood cancer. I didn’t treat him like he was sick. I treated him as I would have even if he wasn’t diagnosed, because Ollie just wanted to be like any other kid. If he wanted to play trains and I wasn’t up for it, then I just didn’t.

At least, that’s the way it was in the beginning.

Later on, when his treatment got worse and I started to physically see his weakness, there were times when I felt he needed help. And in those times, I always had Ollie’s back.

Like the time on the bus. Ollie always wanted to go to school, even when he was ill. I was three years older than Ollie, so we would walk to the bus together, and I would help him on the bus. When we found an open seat, I would let him go in first because he loved to look out the window on the rides to school and back. 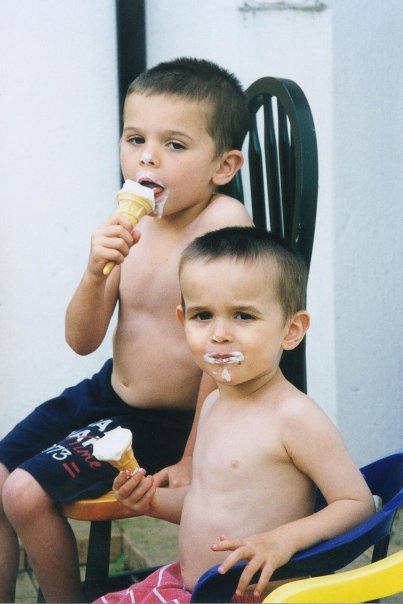 Ollie’s treatment had advanced to the point where he was bald and a little skinnier than he used to be. As more kids got on the bus, I saw this one boy looking at my brother. The boy glanced at Ollie’s bald head and started to giggle. After a while, he was cracking up. Soon enough, the boy pointed at Ollie and yelled, “He’s bald!” while laughing hysterically.

I remember looking at Ollie as he bowed his head in shame. I looked at the other boy, picked up my lunchbox, and smacked that boy directly in the head with it. Ollie just smiled and looked out the window. I got in trouble, but didn’t regret fighting for my brother. I know he would have done the same for me.

Ollie was 7 years old when he died; I was 10. All of us – my mom, dad, and older sister – suffered terribly and dealt with it in different ways. I alienated myself from a lot of things – school, friends, talking about feelings. I don’t believe anybody knows how to deal with the death of a loved one. No matter how old the person is, it is always horrible. I think the only thing that really helped us was time and comfort, which in the end, made us stronger.

A few years later, during my junior year of high school at Downers Grove South, my school held a St. Baldrick’s head-shaving event. Anyone could sign up, and about 60 or so people shaved – students and staff, girls and boys of all ages. Most of them were shaved during lunch periods, but a select few were shaved in front of the entire school during the St. Baldrick’s assembly.

The people who were chosen for the assembly were females, teachers, younger children, families, and special stories. I was one of the special stories. My first year, I just mentioned that I was shaving for Ollie. For my senior year, I got even more involved and made a speech. Both assemblies were amazing.

This year, I have been invited back to my school for the St. Baldrick’s assembly, but I am taking it a step further. I am not cutting my hair or beard for close to five months before I shave in honor of Ollie and children with cancer (and their families) everywhere. Then in March, I am running a half marathon in downtown Chicago to show that the Tibbles family is still strong with Ollie in our hearts.

St. Baldrick’s events have been some of the best moments of my life. I know I could just donate money and show my support that way, but there is a reason I choose to shave my head.

I don’t do it to look good. (Quite frankly, I look very strange with a bald head.)

I don’t do it to get attention.

I shave my head to show those children with cancer that they are the strong ones, that I want to be like them and as strong as them.

They are strong, and they are fighters.

Donate on George’s head or sign up to be a shavee!

high school events i shave for