‘I Can Be the Voice for My Son’: Father Shaves his Head for the Eighth Time in Honor of his Son

For Eric Haddad, head shaving isn’t just a one-time deal, because as the dad of a kid who fought brain cancer, he knows firsthand that the effects can last a lifetime. Next month, at the Rocky River event in Ohio, Eric will be shaving his head for the eighth time, while raising funds for research that he hopes will lead to better, safer treatments for kids with cancer. 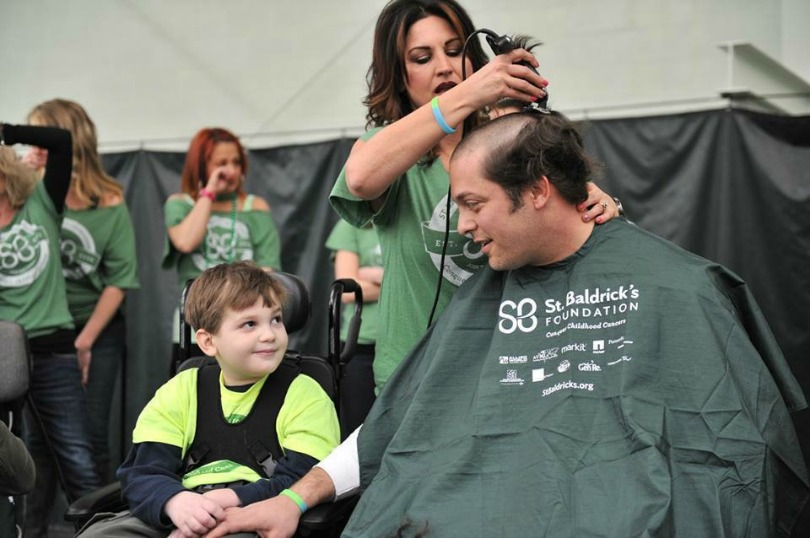 During a past event, Eric shaves for his son, Shane. 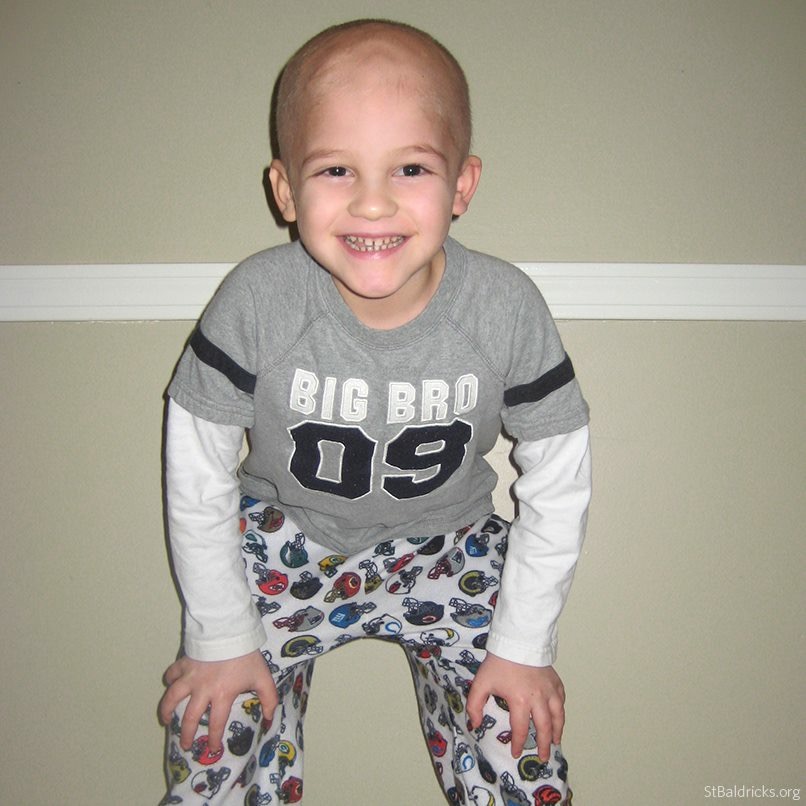 Shane mugs for the camera during his treatment for brain cancer.

“It’s been a pretty extensive trip for him,” said his dad, Eric.

Though those surgeries and treatments stopped the cancer, they left the boy with severe long-term effects. During his third brain surgery, Shane had a stroke. Now he’s unable to walk, has trouble communicating and is on medication to control seizures.

But despite everything, he still manages to be the typical pesky brother between two sisters.

“He’s pretty spunky. His sense of humor comes through. And now that he’s building out the vocabulary, he’s able to tell his sisters, ‘Hey, don’t eat my French fries,’” Eric said, describing his son’s progress. “So, things that are as simple as that … before he may not have been able to do that, but now he can argue with his sisters about who gets the last French fry.” 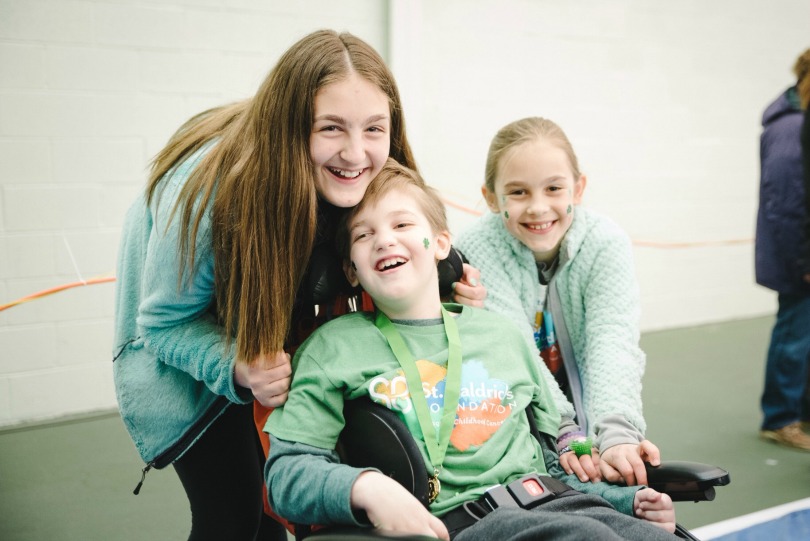 Shane goofs around with his sisters during a St. Baldrick’s event.

The kid just keeps on persevering, alongside his family. And they’re not alone. The Westhaven Warriors are right there with them.

Named for the family’s tightknit Cleveland, Ohio neighborhood, the St. Baldrick’s team has raised an incredible $400,000 for childhood cancer research over the years.

And every year, Eric sits in the barber’s chair to help fund better, safer treatments for kids like his son.

Eric is almost halfway to his goal of $5k for kids’ cancer research! Support Eric in his eighth shave and give on his head today >

“It’s a constant reminder to me that I can be the voice for my son,” Eric said. “I can stand up and show my bald head and say, ‘Hey, listen.’” 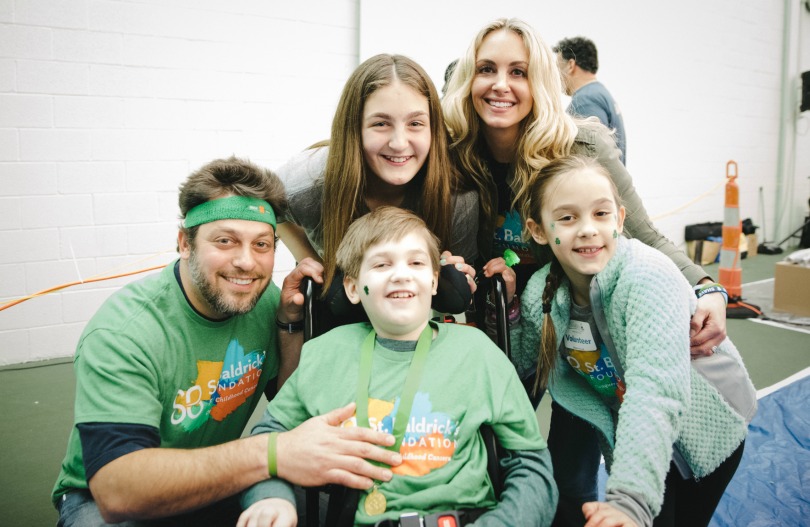 The whole Haddad family smiles for the camera at their St. Baldrick’s event in Rocky River, Ohio.

This year, at the event on March 17, Eric will get his head shaved for the eighth time. Shane, as usual, will suit up in a cape next to his dad and get a bit off the top himself. Then he’ll bathe in the glow of support from his place of honor in the front row.

“It ends up being a really nice kick-off to the event, because there are a lot of kids that are in the front row that are cheering him on. So he feels like he’s a big part of it,” Eric said. “Does he get jazzed up? Absolutely. He probably rubs 85 heads that day.”

Many of those baldies are kids Shane knows from around town and neighbors from their cul-de-sac. And that’s exactly why Eric keeps coming back, year after year, to participate in this event. 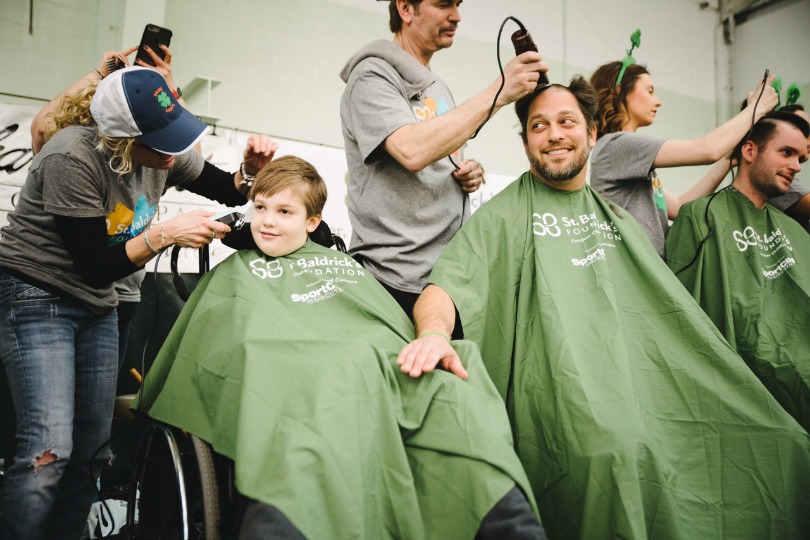 Shane sits proudly next to his dad during their shave.

It’s all about the kids.

Help Eric, Shane and their Westhaven Warriors take childhood back from cancer. Click the button and boost their fundraising today.