‘I Am’: A Poem by My 8-Year-Old Childhood Cancer Survivor

Honored Kid Kaiden is a happy second grader who loves camping and biking. He’s also a brain tumor survivor. His mom, Amy, thought Kaiden had left childhood cancer in his past — until one day, Kaiden brought home a school assignment that showed her just how much cancer still affects him. 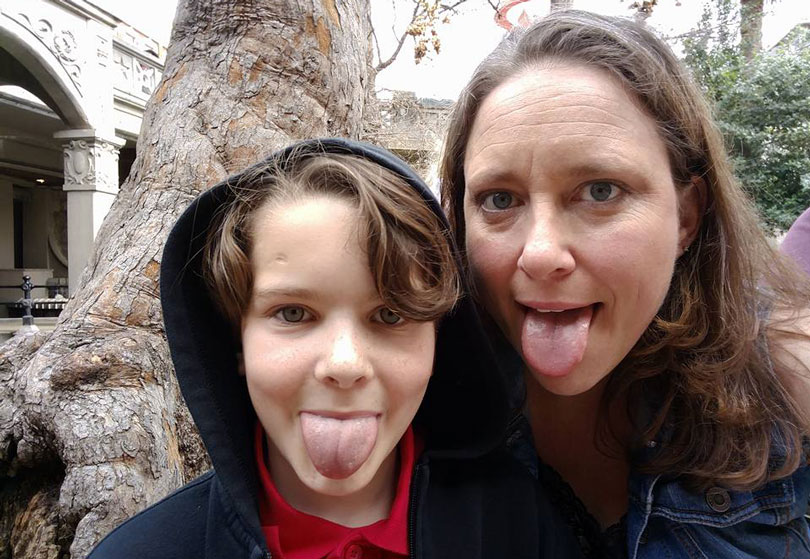 His answers were like most in his second grade class: “I am happy,” “I feel good,” “I wonder when my dad will download more apps on my computer again.” Then, halfway down the list, one of his answers stopped me dead in my tracks.

On March 26, 2010, Kaiden was diagnosed with an aggressive cancerous brain tumor called supratentorial primative neuroectodermal tumor, or sPNET. It’s been six years since his introduction into a world of hospitals, chemotherapy, radiation, blood draws, pokes, port accesses and bald heads. His treatment lasted exactly one year, and as of today, he is cancer free. We still visit the hospital for a yearly MRI to make sure he remains that way.

Six years out from diagnosis seems like a lifetime, especially to a boy who was 2 when it all happened. He doesn’t remember much of his time fighting cancer. He remembers riding the chemo pole around D wing. He remembers the sound and smell of the MRI room at the children’s hospital. He vaguely remembers his beautiful friend Alexandra, whom he was fast friends with until her death from leukemia. 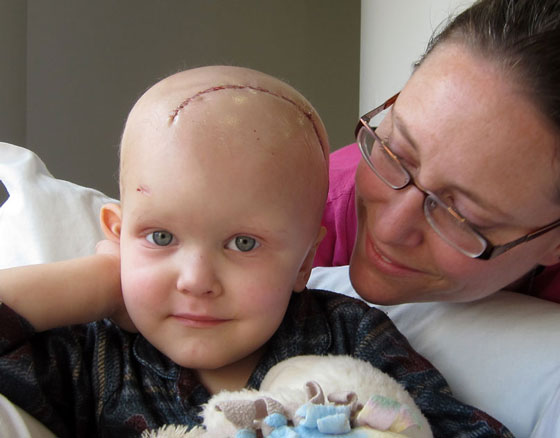 Kaiden and his mom, shortly after Kaiden’s second brain surgery.

As for me, I remember everything.

The anger I felt, sitting in the PICU waiting room, watching the morning commuters continue on with their daily lives as my son lay in intensive care.

The joy I felt every time we received the “no evidence of disease” report from his oncologist.

The guilt that washed over me every time I heard another kiddo wasn’t as lucky as Kaiden.

The pain I felt every time I read another cancer momma’s status about how they ache to hold their child one more time.

But, most of all, I’ve felt fear. Knowing that cancer could rear its ugly head again brings me to my knees. Fear is a constant presence in my life — not always in the forefront of my thoughts, but lingering in the back of my mind. 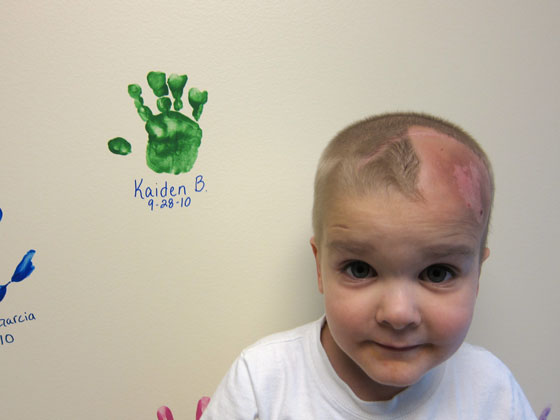 Kaidan posing next to his hand print on the wall, signifying his graduation from proton therapy radiation. His hair has never grown back from the radiation burn on his head.

Until I read these nine words, I didn’t know he was scared. Kaiden knows cancer is the reason for the horseshoe-shaped scar running across his head, and for the bald patch where the hair never grew back in after radiation. He’ll proudly announce that he’s a cancer survivor, but I didn’t think he understood the significance of those words.

I never, ever knew he was worried about having cancer. How could I be so blind? How could I possibly believe that we weathered the cancerous storm unscathed? Naivety? Denial? No one walks away untouched by this deadly disease. Some are luckier than others, but no one gets a completely free pass.

My 8-year-old child is scared he will get cancer again. Cancer is his boogey man. How do you ease those fears?

We can tell him that his chances of getting his type of cancer again drastically decrease with each passing year. But because of the harsh treatment necessary to save his life, his odds of getting cancer later in life are much higher than a “normal” kid. How do you explain to a child that the methods we chose to fight his cancer could end up killing him? 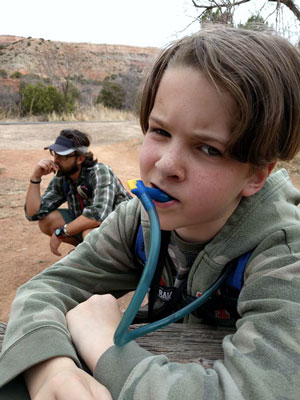 Kaidan on a family camping trip. Camping is one of his favorite things to do.

Those nine words bring so much pain to my heart. But as I continue reading the rest of his poem, the pain is eased by knowing he doesn’t let that fear control him.

“I want to learn more stuff.”

“I dream a lot of different things.”

Not once, but four more times in his poem, he says “I am happy.” I will focus on those three words.

I will concentrate on the fact that my son doesn’t dwell on his fears. I will follow his lead and continue living life with as much exuberance and positivity as he shows us each day. I will learn by his example.

We will work on his fears together, but we will focus on the fact that my boy, my remarkable cancer survivor, is happy.

Kids like Kaiden shouldn’t have to worry about cancer. Help fund research for real, lasting cures for childhood cancer — give today.

Give
Read more on the St. Baldrick’s blog:
brain tumor