It’s tough to beat pizza as a kid-friendly food. Birthday parties? Pizza. Not sure what to eat for dinner? Pizza. But on this National Pizza Day, February 9, 2020, there’s a connection between pizza, kids with cancer, and a pay-it-forward movement that continues – nearly 7 years after a girl named Hazel started it with a hand-crafted sign from her hospital room.

This Is the Message That Started It All 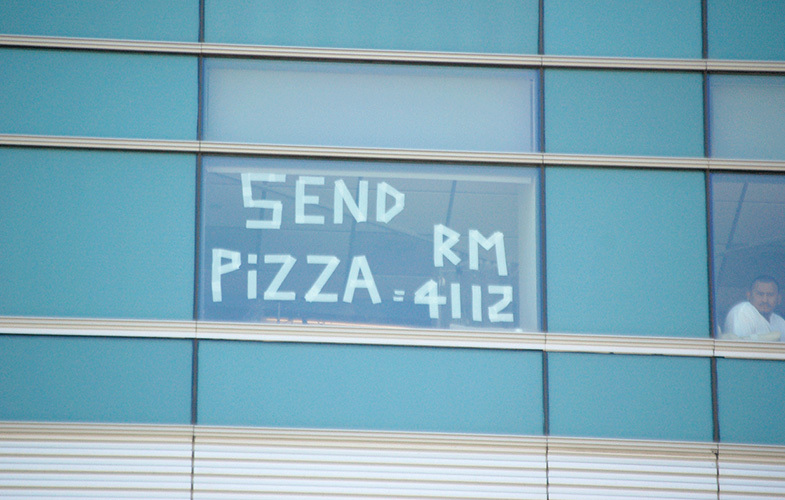 Little did Hazel’s grandmother and mother know, the hand-made sign meant to cheer Hazel up during treatment would go viral.

It started, simply enough, with a request for food. But, since the request came from a patient at Children’s Hospital of Los Angeles (CHLA), it spread like wildfire.

Hazel was diagnosed with neuroblastoma at age 2 and the hospital became her second home during treatment. As her mom, Lauren, tells us, one day, Hazel’s grandmother came up with the idea to create a sign to cheer her up. “SEND PIZZA, RM 4112,” it read. According to Lauren, “Hazel and I put up the sign using medical tape. She was simply looking for a way to say hello to the people in the Vons’s parking lot, so a sign was a way to get them to look up. If we got a pizza out of it, then all the more fun!” It didn’t take long for social media users on Reddit to share the message — and for pizza to start arriving at CHLA. 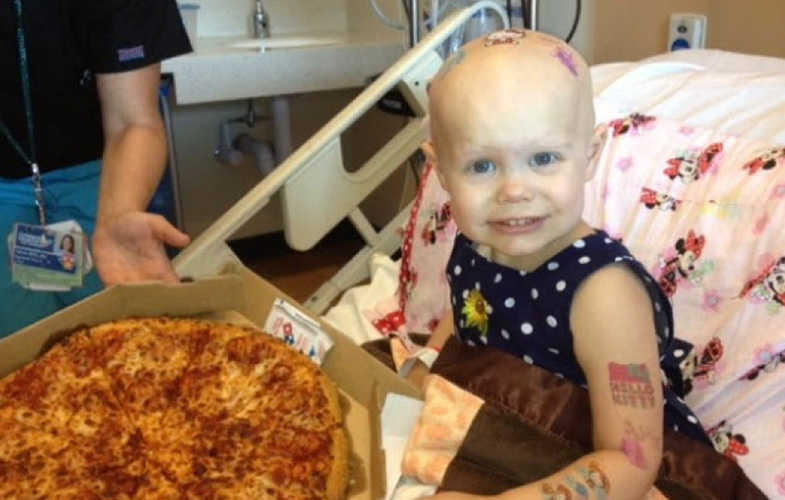 Hazel with her favorite – cheese pizza!

Soon, Hazel had more pizza than she and her family knew what to do with, so they decided, of course, to share with the nurses, doctors, medical staff, other patients, and anyone who was hungry. Two hundred fifty pizzas later, a pay-it-forward tradition was born.

Hazel became known as the “pizza girl” and was delighted to share her favorite (cheese pizza) and all the others with the whole staff. More pizzas were to follow, and soon, others were getting into the act.

Hazel and 2020 St. Baldrick’s Ambassador Micah became fast friends when both were in and out of treatment at CHLA. Micah’s dad, Jeff, says, “Micah and Hazel were the kind of friends who…always had a ton of fun together and asked their parents why they didn’t see each other more. To them, it didn’t matter if it was just the two of them playing in the hospital’s cafeteria or at home with Hazel’s siblings — they would have a great time.” 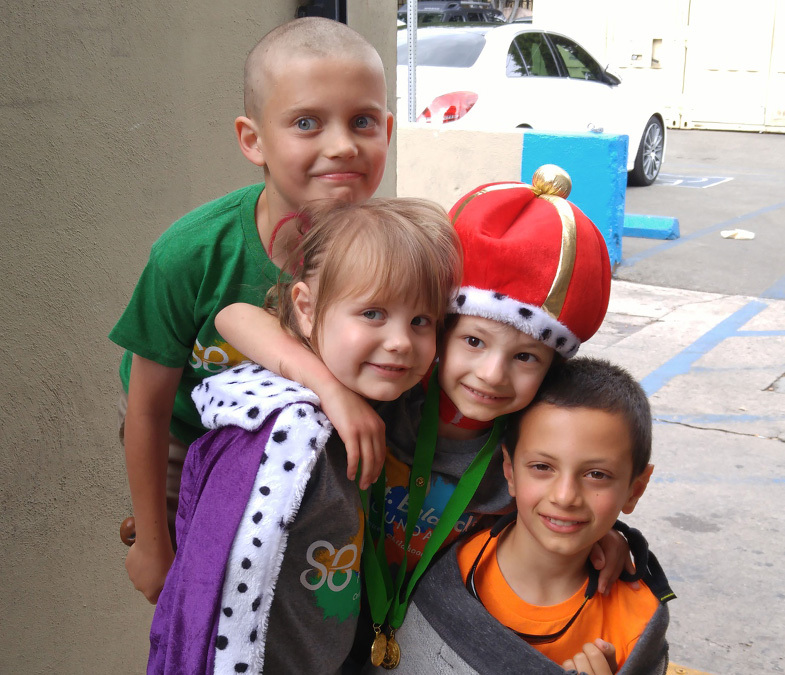 Hazel and her brother, Micah, alongside 2020 Ambassador Micah and his brother, Asher.

Hazel went through 18 months of treatment — chemotherapy, a resection surgery, radiation, immunotherapy and a stem-cell transplant — and would be declared cancer-free just when she was 3. She had 2 ½ years without cancer, before it reappeared in 2016. She beat cancer for a second time, only to have another recurrence in 2017.

During this last recurrence, though, she continued to tell her story and encouraged kids just like her to keep fighting. According to Lauren, “she brought gifts for nurses expecting babies, she raised money for research, and she was always wanting to help people.” She died on March 30, 2018 — but, through the work of others, her spirit lives on…not just on National Pizza Day. 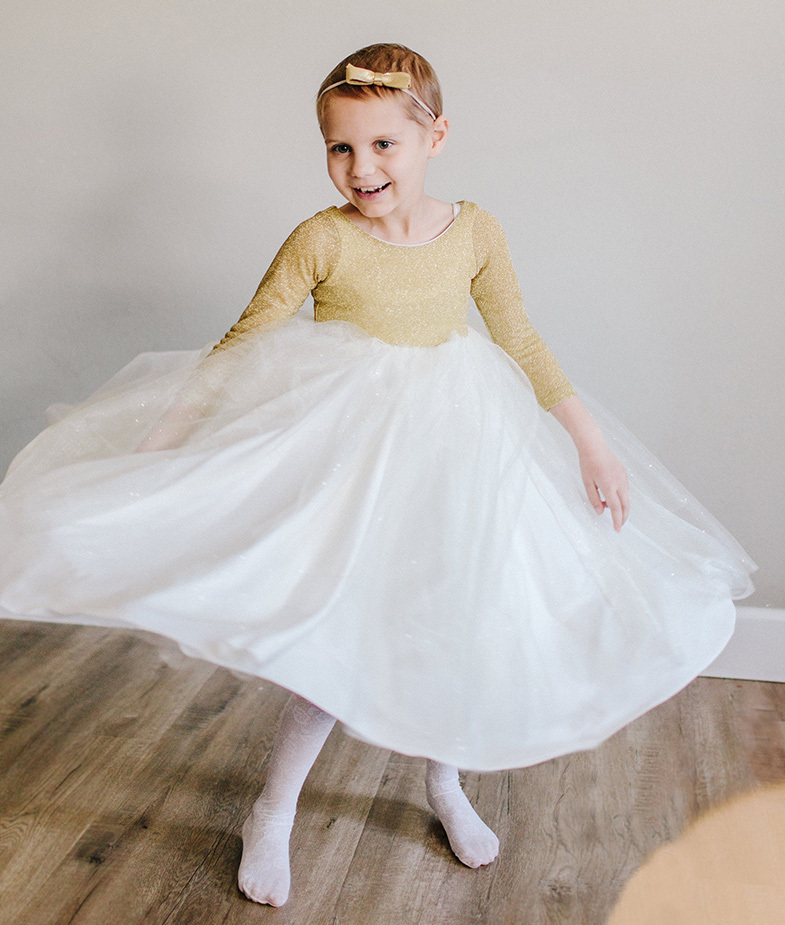 Hazel’s kind heart inspired those around her to give back in her honor.

In 2019, the Hammersley’s asked others to honor Hazel’s memory on her birthday (January 25) by sending a pizza to nurses and hospital workers, but also first responders in their community: firefighters, police officers, and paramedics; just like Hazel did. Lauren says: “We encouraged people to pay for others’ orders, take pizza to the hospital or to first responders, or just simply have a pizza party at home.”

Micah’s dad, Jeff, says, “It’s important to Micah that we honor Hazel’s memory in ways that would make her happy. Sharing with the people who take care of others when they’re in danger or hurt is a way to enjoy something special to Hazel while being kind. For us, first responders are a lot like the nurses that take care of kids with cancer. They run toward the problems, figure out how to help, and do everything they can to make sure you’re as safe as possible. Last year and this year, we were honored to do that. Micah was not shy about explaining to some of our local firefighters why we were bringing them dinner.” It’s a way to honor a very special friend, and to remember all those still fighting childhood cancer.

On this National Pizza Day, why not live and love like Hazel, by sharing a pizza and making a donation to see that Hazel’s hope for a cure lives on.