Goodbye, 2016: A Look Back at the Year With Our Ambassadors

We may be welcoming new Ambassadors soon, but not before we give our 2016 Ambassadors a chance to share some final thoughts about the past year. Read on to find out just how much the St. Baldrick’s community means to these amazing kids and their families.

In 2013, intense pain in Alyssa’s leg revealed a tumor in her femur — a type of childhood cancer called Ewing sarcoma. After a year of intensive treatments, aggressive surgeries, and a metal leg implant, Alyssa showed no evidence of disease.

Now, Alyssa’s doing well and enjoying being a 14-year-old. She refuses to let childhood cancer get in the way of doing the things she loves, like roller skating — something her parents never thought they’d see her do again.

Alyssa, what was your favorite Ambassador memory?

What would you say to St. Baldrick’s researchers?

“Keep up the good work. It is so important to find safer treatments for kids like me and my friends. Also, thank you so much!”

Cheyenne was diagnosed with T-lymphoblastic lymphoma after doctors discovered a tumor blocking her airway.

Cheyenne’s motto is simple: fight like a girl. As she powers through two years of chemotherapy treatments, her positive, fighting spirit remains strong.

Cheyenne is ambitious, and she’s got big plans for the future. She hopes to become a pediatric oncologist someday so she can help kids just like her.

Cheyenne, what’s the best part about being an Ambassador?

“Getting to be a part of things I never would have been a part of, getting to meet kids like me, and getting to raise more awareness for childhood cancer.”

What would you say to other kids with cancer?

“It’s a hard battle to fight but everyone can get through it. You are always stronger than what you are currently fighting.” 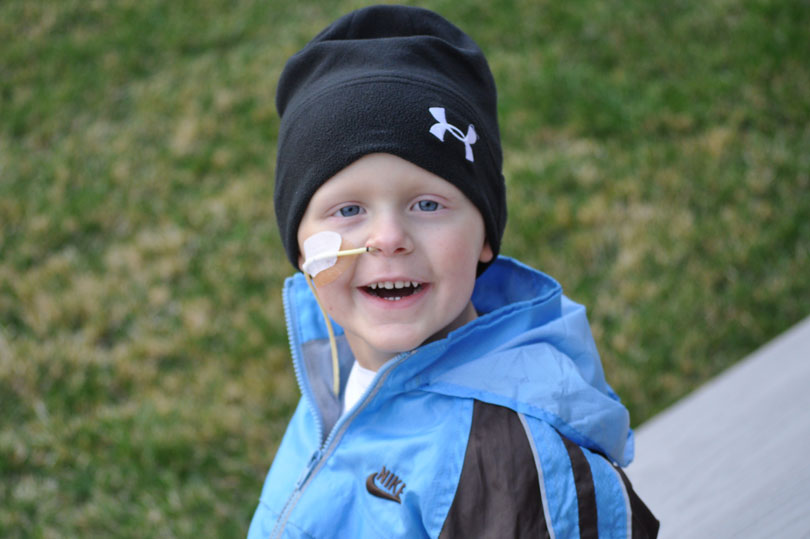 Holden was diagnosed with stage IV anaplastic Wilms tumor in October 2010. Holden’s cancer — and his treatments — were tough, but Holden was even tougher. He handled it all with grace, and he never let it get in the way of him enjoying being a kid.

Holden passed away on May 22, 2014, nine days before his seventh birthday.

Holden’s mom, Miriam, shares how meaningful this past year as an Ambassador Family has been:

“In his short life, Holden touched many hearts and lives. We did not want to see that light go out, and we were incredibly honored when the St. Baldrick’s Foundation invited Holden to be one of the 2016 Ambassadors.

“We are so grateful that St. Baldrick’s offered us a platform on which to share Holden’s triumphs and tragedies in order to raise awareness about pediatric cancer and the need for money to fund research that is sorely lacking.

“We are so grateful to everyone who has been inspired by Holden’s story to support the St. Baldrick’s Foundation, and we sincerely hope that through the collective efforts of all donors we are able to transform the future for all children affected by cancer.”

Isaac was diagnosed with a type of pediatric brain cancer called medulloblastoma when he was 5 years old. After 30 radiation treatments, nine rounds of chemo, and an extensive brain surgery, Isaac is happy to be finished with his treatment and showing no evidence of disease.

Isaac, what has being an Ambassador meant to you?

“It has been really cool to be an Ambassador for St. Baldrick’s during 2016. It’s still crazy to see my face on cards, posters, and banners all around the country. I’m so happy that my story is helping raise money for childhood cancer.”

What would you say to St. Baldrick’s volunteers and shavees℠?

“Thank you to everyone who volunteers or shaves their head for St. Baldrick’s. Kids can’t do this alone — we need lots of people to help us with our fight.”

Phineas was diagnosed with chemo-resistant acute lymphoblastic leukemia (ALL) when he was 4 years old. A St. Baldrick’s-supported immunotherapy trial saved Phineas’ life — and now, over two years after his treatment, Phineas is a cancer-free kid.

“Being an Ambassador Family has been a privilege and an honor this year. It is our hope that sharing our story has helped raise awareness and funds for childhood cancer research.

“At times it was very painful, but it was something we had to do. It was especially humbling to bear witness to so many people who cared enough to take the time to attend St. Baldrick’s events, shave their beautiful hair in front of an audience, and ask others for money to sponsor them.

“Kids with cancer and their families certainly didn’t choose that path, but we were eager for the opportunity to do something positive for an organization that directly impacted our son’s chances for survival.

“Whenever St. Baldrick’s needs us, we’ll be there.”

It’s almost time to welcome our 2017 Ambassadors! Don’t miss the announcement in early January — sign up for our newsletter.