It’s human nature to want to make the world a better place. As I’ve matured into the 21-year-old I am today, I’ve taken a lot of time to think about this idea. We all have a purpose in our lives, but it’s what we do with that purpose that eventually affects humanity as a whole. 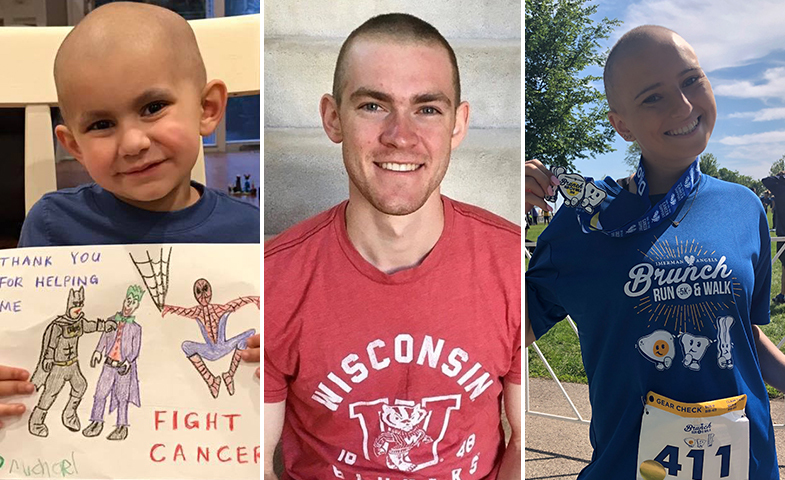 Driven by purpose. Guided by optimism.

Children are so innocent and we often ask why are they plagued with something adults struggle to handle? The truth: cancer does not discriminate. It does not care who you are, what you believe in, or what your future holds. But cancer can and will be defeated. This summer, St. Baldrick’s gave me the opportunity to join the fight and eradicate cancer for good. My situation is unique, though. Not only am I a St. Baldrick’s summer fellow, more importantly I’m a St. Baldrick’s shavee. As someone who has experienced the St. Baldrick’s mission from both sides, I wanted to share my unique story of why I decided St. Baldrick’s was the right choice for me.

Every Journey begins with a choice

My research journey started in my sophomore year at University of Wisconsin-Madison. I always dreamed of working with kids and aspired to be a physician. So, I did what every inexperienced kid should do: I Googled “Best pediatric research fields.” The same result kept popping up: Pediatric cancer. I didn’t know much about pediatric cancer at the time, but I knew it was emotional. I contemplated if this was really something I wanted to do. Then, it hit me. I’ve lived my entire life on a proverb: don’t say “what if.” If I’d decided then that this wasn’t something I wanted to pursue, the story would have ended there.

I spent the next hour drafting an email, that would soon change my life forever. Every part of it had to be perfect. The way I introduced myself, how I described myself as a person, what my aspirations were. I’m convinced that what got my foot in the door, was my passion. I made it clear I wanted to impact the world and wanted to do that by impacting pediatric cancer. To find a cure that we so desperately need. I sent emails to 40 doctors and researchers that aligned with my passion and who I wanted to work with. I heard back from one, Dr. Christian Capitini. I thank Dr. Capitini every day for changing my life.

Would I shape the future, or would it shape me?

I’ll never forget my first day in the lab. I worked with the Senior Research Specialist, Paul Bates. The most important thing he taught me was: We might strikeout nine times out of ten, but on that tenth swing, we’re going to hit a home run. It’s this belief, that motivates me and makes me excited to come to the lab every day.

I remember talking about AgN2a 4P with my parents. They thought I was talking about alphabet soup. I explained AgN2a 4P is a vaccine used to educate the immune system. It’s used to create immunity against neuroblastoma, which is the most common pediatric solid tumor outside of the head and neck. It’s well known that high risk neuroblastoma is very hard to treat, with only 50% survival. The vaccine model we created included using a type of immune cell, called a natural killer cell, in combination with the AgN2a 4P vaccine, after a bone marrow transplant to induce immunity towards neuroblastoma tumor cells before they accumulate into cancer. It was going to be a shot in the dark, it was going to be a risk, but I wanted to hit that home run. When Dr. Capitini told me I was going to be working on this project, I knew what was at stake. I wasn’t going to back down. The odds were quite a bit against us, but this is when things started to get personal.

Word got out within my family’s circle of friends, that I was working in a pediatric oncology lab. One day I received a message with a picture of a cute, bald little boy, named Michael. Included, was a picture he’d drawn with superheroes. The message was from a family friend and it read: thank you for helping our superhero fight cancer. Michael was diagnosed with neuroblastoma at the age of 3 and after chemotherapy, radiation, surgery and multiple relapses, he is still here fighting every day.

Michael’s relentless courage and spirit inspires me to do my work. I have his picture hanging at my desk to remind me why it’s so important to do the work we do. The AgN2a 4P vaccine would directly impact Michael and could prevent him from having to go through this traumatic experience again. 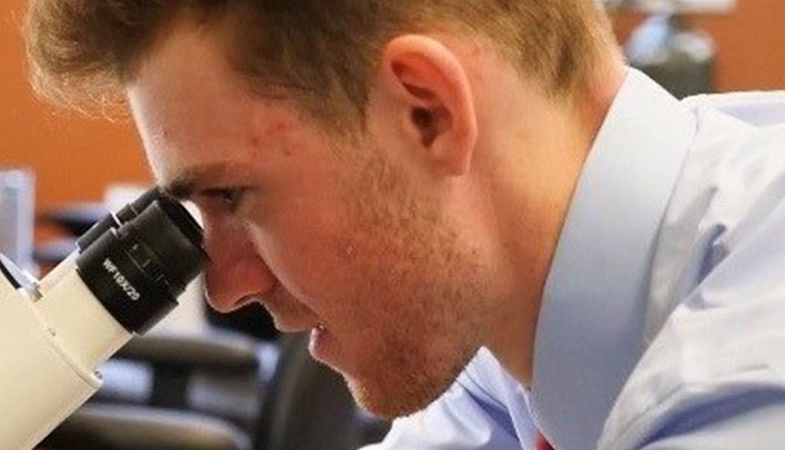 Never give up on the things that make you smile

As the winter of 2019 approached, I told Dr. Capitini I wanted to take the AgN2a 4P vaccine model to the next level and make it a curative model to neuroblastoma. He said the best way to do that was to apply for a grant. St. Baldrick’s instantly came to mind. From speaking with Michael’s family, I knew St. Baldrick’s was an organization close to their heart. Michael is a St. Baldrick’s Honored Kid who has inspired dozens of St. Baldrick’s shavees and volunteers. What better way to take this to the next level than to combine my inspiration from Michael with the organization that’s helping him live and dream?

When applying for the St. Baldrick’s Summer Fellowship, I found myself looking at Michael’s picture of the superheroes for inspiration. I saw a smiling kid who’s still dreaming and thought it’s amazing what a smile can do. A smile spreads happiness, love, inspiration, but most importantly, hope. Michael had been through so much and fought a battle that isn’t easy for an adult, let alone a kid. But through everything, he never lost his smile. He never lost hope. I realized then that my research isn’t about curing some disease. It’s about giving children hope that they will be able to live their childhood. Hope that they won’t have to stop smiling, because that’s the best part about being a kid.

The power of hope knows no bounds

Over this past winter break, I spent several days thinking how to make a bigger impact. Finally, it came to me. Everyone has someone they look up to as a hero. My hero is Michael. He’s taught me to persevere when times are tough. He’s taught me how to smile and to keep hope alive. Those are hero qualities to me. Looking at Michael’s picture made me realize I wanted to be like him. But the first step was to look like him. I got on the phone later that day and called St. Baldrick’s. I was ready to shave my head.

As I organized the head-shaving event I came up with the event theme “My Fighting Hero,” as a testament to the inspiration I drew from Michael. But it didn’t just stop with Michael. While shadowing Dr. Capitini in the pediatric oncology clinic I met lots of kids battling cancer. One thing they all shared was a simple smile. All of them taught me that no matter how much life stacks the odds against us, it can never take away our hope. That’s heroic. Those are my fighting heroes.

I didn’t allow hope to be something abstract.

I made it literal, grasping one hopeful handful of hair at a time.

April 26th, 2020 is a day I’ll remember forever. It’s the day I got to look like my heroes. A few days prior, I talked with one of my other honored kids, Leah, who I’ve been friends with my entire life. We grew up in the same neighborhood and she too, has been my inspiration. She’s never given up in her fight against cancer and is a shining example for how to live with happiness.

During our call she said she felt uncomfortable about shaving her head as she didn’t want people to see her bald. So on April 26 I said to myself, I’m going to be shaving my head for, with and to support all of my fighting heroes. Because when people voluntarily shave their head, to be one with pediatric cancer patients, it helps kids feel that they are not alone and that makes them more comfortable.

Cancer is a word, not a sentence.

Over the past two years I’ve been given many opportunities to make an impact on this world and I am grateful for them. I learned if you go up to the plate and swing for the fences, eventually you’ll hit a home run. When sitting on your couch wondering how to make a difference it’s not easy to say, “I’ll shave my head.” But if on that winter day, I wouldn’t have even given the thought a chance, I wouldn’t be sitting here writing about the day I got to look like my hero; I’d be sitting here saying “what if.” And I don’t say “what if.”

Cancer is just a word, it’s not a sentence. No kid should ever have their childhood taken away by cancer. By getting involved with St. Baldrick’s, whether you’re a researcher, head shavee, or someone who supports fundraising efforts, know that you’ve made it possible for a kid to keep dreaming. Seeing a kid smile is the best present life can give and it shows that hope is still alive. Whenever you have the opportunity to shave, take it, because you never know whose life it will impact. Including your own. Whenever you see a kid fighting, let them know they’re your hero, because it will make them stronger. And whenever you see a kid win, celebrate them, because no kid should ever have to lose this battle.

To all the kids out there fighting, YOU’RE MY HERO!