FINDING LIFE AFTER DEATH: After losing twin boys to cancer the Deckers harness the power of hope to honor them.

For a parent, losing a child shatters your core beliefs, assumptions about the world, and your expectations of how life should unfold. Losing two children only 18 months apart… truly devastating.

The day their lives changed forever

The Decker boys, Seth and Joel or the “Double Deckers” as they’re fondly known, were born in 2014. They joined big brother Nathaniel who was almost 5, mom Natalie and dad Will. Like most twins they were inseparable. They shared an intense bond, were emotionally in sync and their lives were completely entwined. They were a burst of love and joy. Will and Natalie fondly recall how they, “enjoyed every minute of having three boys in the house and the laughter and noise and how much they loved each other and just had fun together.”

Fast forward to December 2016, the morning that will forever be etched in their memory. After Seth was hospitalized for three excruciating weeks, the doctors told them Seth had been diagnosed with a rare sub-type of acute myeloid leukemia (AML), a type of blood cancer. Their world stopped and suddenly ceased to make sense. Three months later their world was once again rocked when they were told that Joel too had been diagnosed with AML. Natalie recalls that, “it was a terrible time… it took several days to fully sink in that it had really happened.”

While the boys underwent treatment, the parents had no choice but to split up, each staying with one of the boys — Natalie with Seth, Will with Joel. Seth on the bone marrow floor and Joel on the cancer floor. Not only was the separation difficult for the boys, who had until that point in their lives been inseparable, but Will and Natalie were also forced to spend weeks at a time away from one another. As Natalie put it, “we couldn’t split 50/50 because you miss too much of what’s going on with either Seth’s care or Joel’s care.” Meanwhile, Natalie’s mom had moved into the Decker home to take care of Nathaniel. 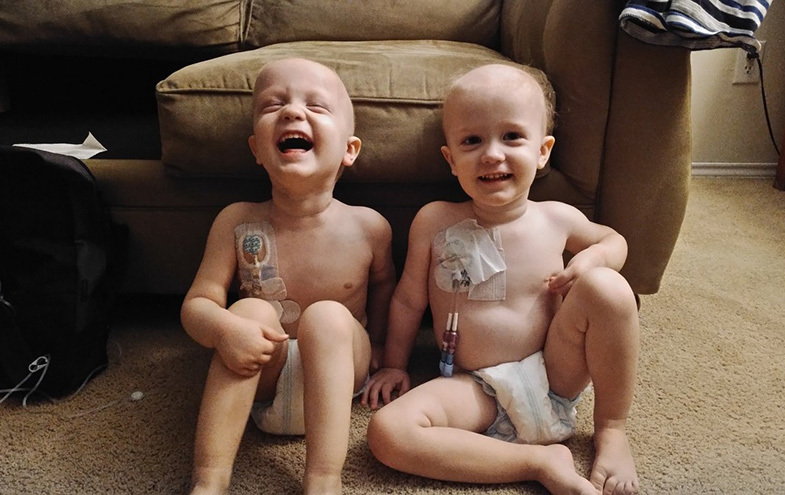 In April of 2017, Seth finally returned home after his bone marrow transplant, followed later that month by Joel after finishing his first round of chemo. Joel was readmitted for a relapse in August, after his health started to decline drastically. He spent the last two weeks of his life in the ICU. As family gathered round as much to support Joel as well as each other, Nathaniel sat in the bed and stroked Joel’s hand and head and talked to him. As Natalie put it, “Nathaniel just loved on Joel, the little bit of time that we had with him.” Seth on the other hand, refused to go into the room. “He was there, but did not want to come in the room,” Natalie explained. “I think he sensed something was happening but was not able to understand all of it.” Almost as if accepting what was going on would break their unbreakable bond. Joel Decker died at the age of 3 on November 1, 2017.

After Joel’s death, Seth’s blood count numbers eventually started to improve. But soon after, his health too started to decline. Doctors determined Seth needed a second transplant and in November of 2018 he received it from his perfect match — big brother Nathaniel. Seth remained in the hospital for months afterward due to complications, including graft versus host disease, which occurs when the new bone marrow attacks the host. Unfortunately, by April 2019, Seth’s cancer had relapsed. The Deckers decided to take Seth home because as Natalie said, “we wanted to spend as much time at home together.” Eventually they were forced to take Seth back to the hospital. He died peacefully with his family by his side on May 10, 2019 at the age of 4. 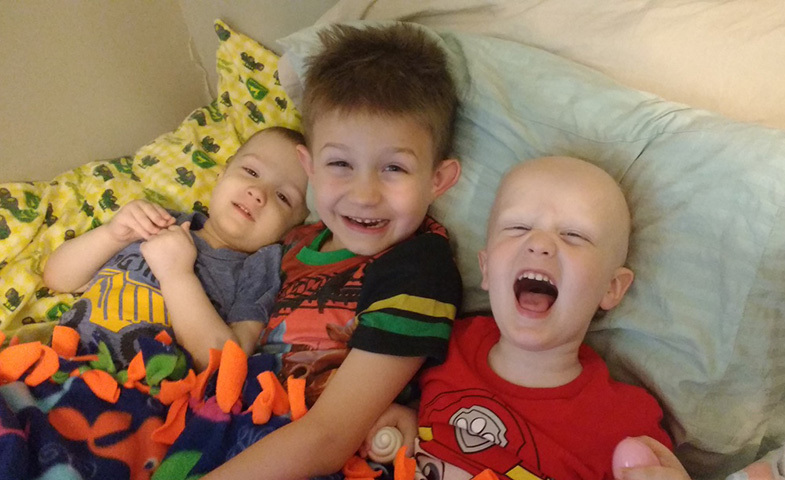 In life, Seth and Joel may have been double the joy and double the love but in death they were far more than double the loss. The Deckers were devastated. It felt like the ultimate violation of the rules of life. The loss of a child is the single worst stressor a person can go through. A loss of this magnitude leaves a parent struggling to breathe, feeling numb and the grief can be paralyzing. And to make matters worse, “Nathaniel, now 10, even felt a sense of guilt because the bone marrow he donated to his brother didn’t work,” said Natalie.

The feeling of loss is something that goes deep into your DNA. Put simply, as Will said, “a big piece of our heart went with Joel and Seth.” After all, they didn’t just lose their sons that they loved so much, they also lost the years of promise they had to look forward to. The graduations, the marriages, the grandchildren — that too was lost.

Every year, St. Baldrick’s selects five Ambassadors to represent the thousands of kids touched by childhood cancer. These brave children serve as a reminder that childhood cancer doesn’t discriminate and that one in five kids diagnosed in the U.S. will not survive.

These Ambassadors and their families share their journey – the hope, the despair, and sometimes the indescribable relief or profound sense of loss. These families help others to walk a mile in their shoes and to imagine the life that awaits after hearing those life-changing words, “your child has cancer.”

Natalie described Seth and Joel being selected as Ambassadors as, “bittersweet… we’re so proud of them and to help keep their memory alive, it makes us happy.” Will went on to say, “I’ve been really excited about Joel and Seth being Ambassadors this year and all of the events we would be supporting and being able to honor them by telling their story and using their story to help others.” 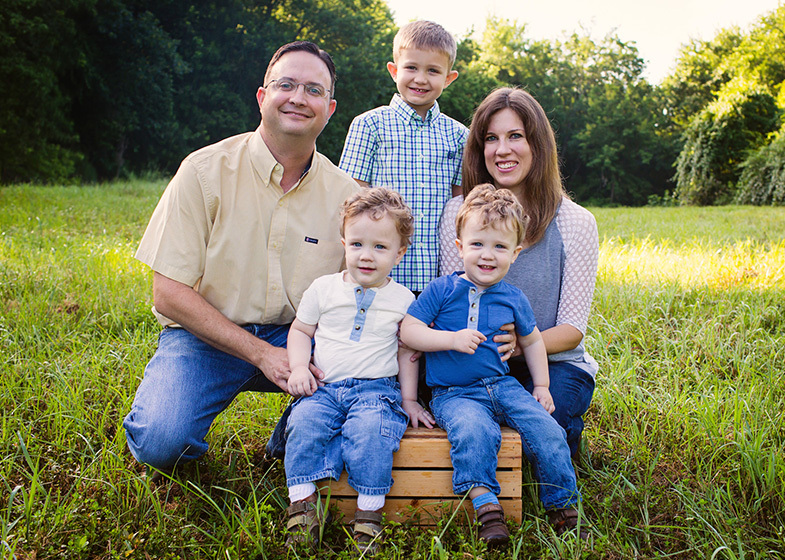 Standing together while standing at least 6 feet apart

They say that what you stand for determines who stands with you. This is even more true today during this incredibly difficult time we’re facing during the covid-19 global pandemic. The true character of individuals, groups, corporations, and our leaders are now on full display.

Though it’s important for us to all socially distance it’s never been more important for us to be socially active. Those that needed help before are now even more in need. Especially those with childhood cancers. Due to the global pandemic, St. Baldrick’s is facing an extremely significant funding shortfall for this fiscal year. Will Decker’s greatest concern is that, “the vast majority of their fundraising typically happens right now but due to social distancing and stay-at-home orders the head-shaving events that St. Baldrick’s is known for are being cancelled.” Without fundraising events there will be fewer funds raised which means less research and slower progress toward cures.

But where there’s a will there is a way. Supporters are now leveraging the power of social media to throw “Virtual Shave” events. This opens up the experience exponentially and creates moments that are highly shareable. So, plan to do your virtual shave with friends/family/team members who are also shavees. Band together and pick a day/time to shave online together — even when apart. You can use online video conferencing tools such as Zoom, WebEX, GotoMeeting or GoogeHangouts to facilitate a multi-location virtual event.

As we practice social distancing, now more than ever help is needed to make childhood cancer a distant memory.

Losing a child is the loneliest, most desolate journey a parent can take. The only ones who can come close to understanding it are those who’ve shared the experience. That’s why the Deckers now focus their efforts on supporting the St. Baldrick’s Foundation, helping to raise awareness and funds to support research to find cures for childhood cancers. As Natalie puts it, “much more research is needed for AML, especially when the disease has relapsed.” The Deckers have established a St. Baldrick’s Hero Fund in memory of Joel and Seth to support research that will help find new treatments and cures so other families won’t have to say goodbye too soon.

Natalie says “From the moment we found out that Seth had cancer, our lives were never the same.” She goes on to say, “St. Baldrick’s has also made an indelible mark in our lives.” That’s why they now focus their time on helping to raise funds. Just as something is lost, something is gained. As excruciating as this journey has been, Natalie says, “they’ve found a principle to live by amid the unimaginable loss.” She went on to say, “Seth and Joel didn’t focus on their limitations. They just found joy in the little things around them that made them happy. Will, Nathaniel and I want to try and live our lives that way.”