Cheers to our Volunteers – Vote for St. Baldrick’s 2020 Volunteers of the Year! 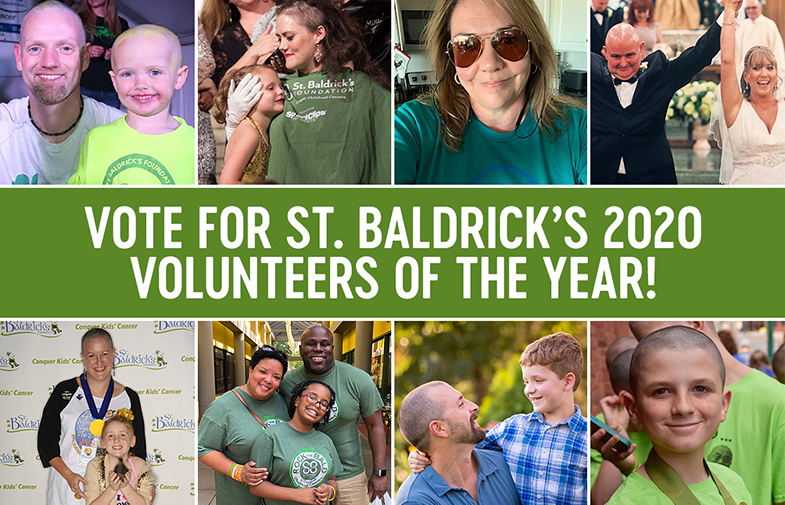 As a volunteer and donor powered organization, St. Baldrick’s is comprised of many amazing volunteers who go above and beyond the call of duty to #DFYchildhoodCancers. We appreciate them all and would love to recognize and award each and every one of them. So, for the first year ever, we selected eight volunteers who have put the spirit of volunteerism into action this past year.

In anticipation of National Volunteer Week next month, we want YOUR vote to see who will be featured in April as a “2020 Volunteer of the Year.” We’ve created three categories: Head-Shaving Participant, Do What You Want Fundraiser, and Advocate and a winner will be selected from each one. Read below to get to know the selfless individuals who have made an ever-lasting impact in their community and the mission of St. Baldrick’s. Then, cast your vote for each category!

The winners will be announced on our social media channels during National Volunteer Week (April 19-25) and will be provided with an exclusive award. Voting is open March 31 to April 7, 2020. Spread the word and ask others to vote, too!

Meet the 2020 Volunteer of the Year Nominees! 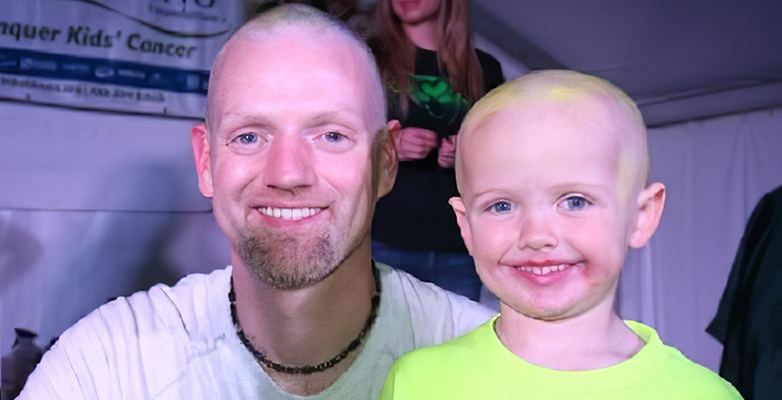 Andy and Finn were immediately taken by the mission, energy and enthusiasm of participants at their first local St. Baldrick’s head-shaving event in 2012. Not being able to imagine what it would be like if their family experienced health issues, the McBride’s joined the cause. They find inspiration from the strength of kids and their parents who speak at St. Baldrick’s events about their successes and struggles, and have committed to participating until there’s a cure. Each year, Andy and Finn create engaging videos in exchange for donations and as a way to keep their supporters involved. They’ve raised $182,273 since their involvement and always make time for St. Baldrick’s no matter how busy life gets.

When asked why they continue to stay involved, the McBride’s said “Are there children still battling? Are there families still fighting? Then we are going to keep doing what we can to help.” 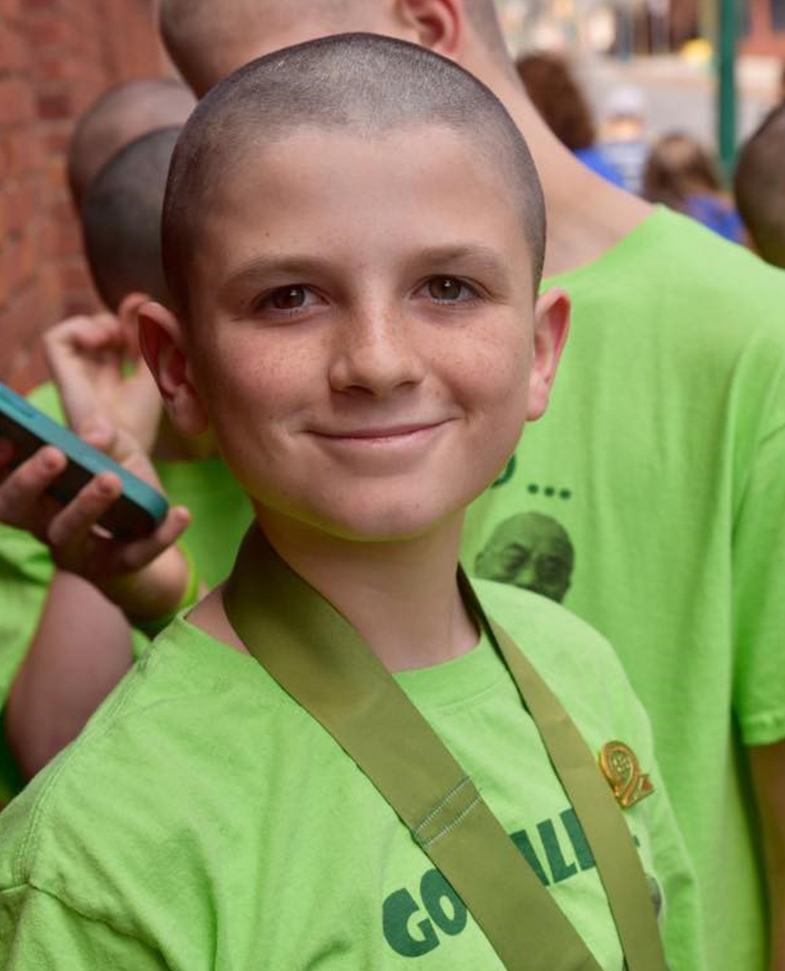 At just 7 years old, Bodie joined St. Baldrick’s. After hearing about his cousin and a family friend shaving, he became inspired. Bodie started his own team, the Baldacious Baldies, with hopes to inspire others, too. When he started with St. Baldrick’s, he couldn’t spell cancer and didn’t really understand it, but as he grew older, he realized the true effects it has on kids. Meeting kids with cancer pushed him to raise more money each year, to help as many kids as he could. Using creative fundraising ideas like writing personal letters and going door-to-door, he raised $114,178 in 8 years. His team has raised more than $250,000 (and counting).

When asked about his favorite part, he said “Shave day. After our hard work, my friends and I would pile into an already packed Kitty Hoynes. The energy would course through the room, and butterflies would find their way into my stomach…and the shave would happen. I am extremely proud of my teammates…we grew from four boys into one of Kitty Hoynes’ top fundraising teams. St.Baldrick’s has helped me become who I am today and I will always stay a part of this great organization.” 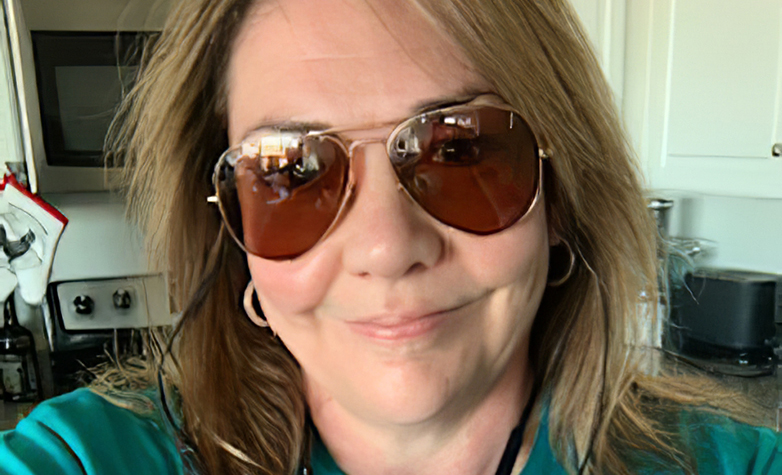 As part of a firm that was acquired by IHS Markit, Debra had previously heard about her new firms’ involvement with St Baldrick’s and the stories of their bald heads at meetings! Finding that both the cause and the fact that the firm would come together in support of the mission really resonated with her. Debra jumped at the opportunity to understand and support the Foundation, while also being able to embed herself more in the company culture by getting involved. Debra leveraged the network of volunteers all over the world who take part every year and some new, so that more than 30 office location events came together for their annual global campaign. It all starts months before with Debra organizing web training meetings with all offices. Debra says that more than anything she’s tremendously proud of all the people involved that make it happen. Make no mistake that Debra’s leadership and passion for St. Baldrick’s continues to be why the IHS Markit Global Shave is so successful and hit its $4 million milestone last year.

When asked why she continues to stay involved, Debra said “The cause is truly one that I challenge anyone not to be touched by. I had no idea that childhood cancer treatment was different and so to see all the incredible research that can go ahead, the treatment of the children and the support for their families with the money raised is phenomenal.”

Do What You Want (DWYW) Fundraiser: 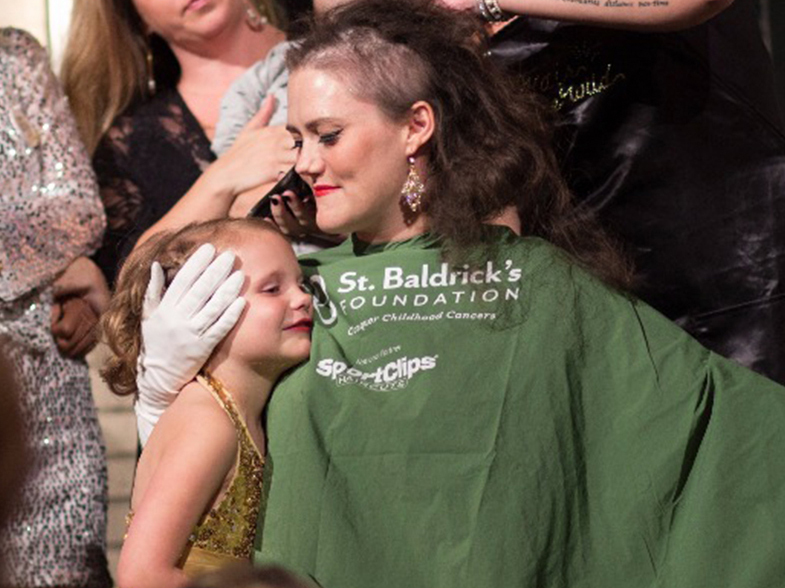 In April 2013, Lauren’s daughter Hazel was diagnosed with Stage 3 Neuroblastoma. Already familiar with St. Baldrick’s, she and her family joined and eventually helped plan the LAPD/LAFD head-shaving event in Los Angeles. Lauren’s involvement deepened by attending other events and participating in Action Days in Washington, D.C., and advocating on behalf of the Foundation. She’s organized a Do What You Want fundraiser for four years known as the Ever After Ball, created a Hero Fund in Hazel’s memory (Hope for Hazel) and raised $314,000 for St. Baldrick’s.

When asked why she stays involved, Lauren said “For me, when my daughter was sick, I needed to feel empowered. During a childhood cancer battle, you can feel hopeless, helpless and powerless. But knowing I could support an organization that was actually capable of doing something to find a cure for my daughter gave me an opportunity to feel like I could actually make a difference in her chance for survival!” 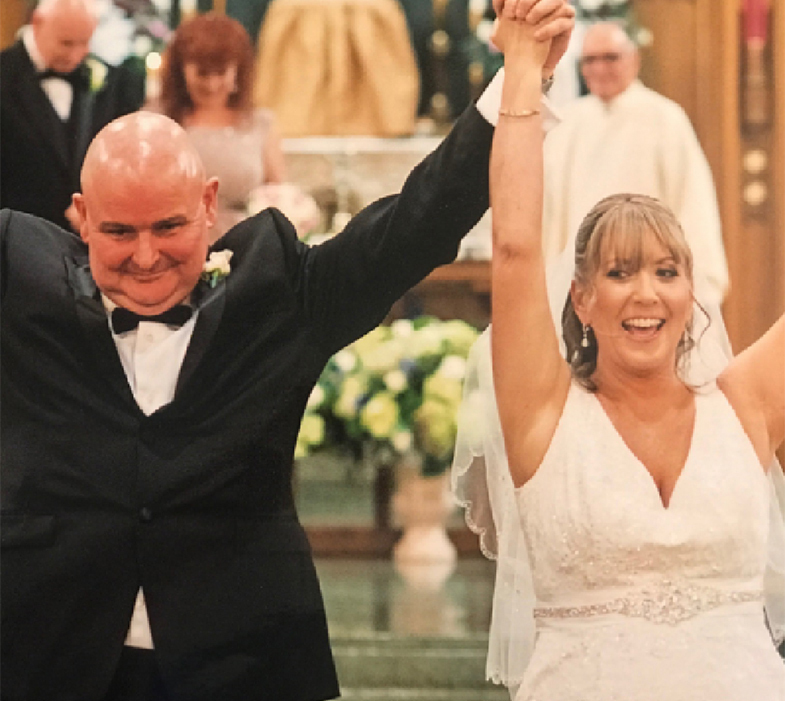 In 2013, Kevin ran the New York City Marathon with his wife Lisa and they created their first Do What You Want fundraiser with St. Baldrick’s. After losing Lisa to cancer in 2016, he vowed to continue racing and fundraising in her honor because in her eyes, the thought of helping kids battling cancer is one of life’s highest callings. Kevin’s Do What You Want fundraisers for St. Baldrick’s have raised over $301,975 to date.

His peers say his passion for this cause is contagious! He says, “it’s a labor of love … if it helps cure one child of cancer or even gives someone a better day, gives some kid a chance to go to Disney World with their parents, I’m happy. When Lisa got cancer, she said “baby, we’ve got to do something. It’s always better to light a candle rather than sit and curse the darkness.” 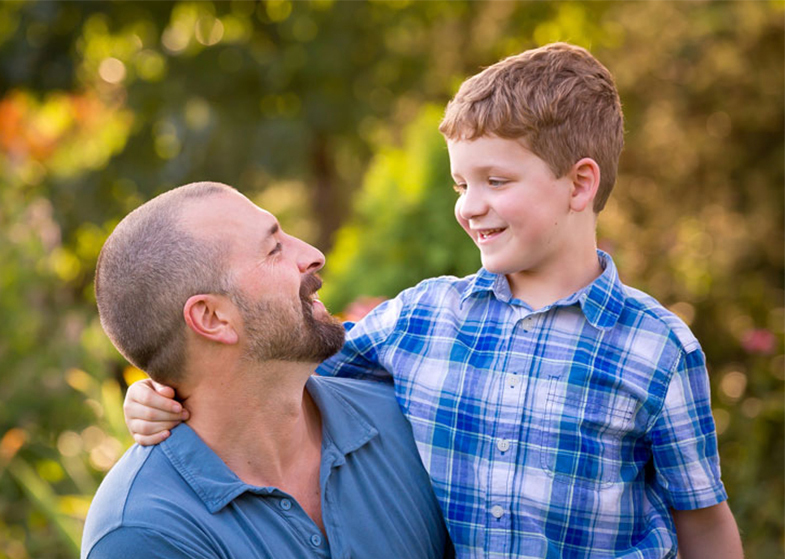 In 2006, Carlos’ youngest daughter died from Acute Myeloid Leukemia. In 2013, his son and 2016 St. Baldrick’s Ambassador, Phineas, almost died from Acute Lymphoblastic Leukemia. He was part of a CAR-T immunotherapy trial which saved his life. Having already lost a child to cancer, Carlos asked his son’s lead doctor from the National Cancer Institute what they could do to help make CAR-T immunotherapy a reality for other desperate parents and kids. She responded: “Advocacy” and then put the family in contact with St. Baldrick’s. He learned just how big of a role St. Baldrick’s played in getting CAR-T trails across the finish line, which impressed in him the need to continue his support of the Foundation. Carlos still continues to advocate so new treatments can be developed that can help other children.

When asked what his favorite part of volunteering with St. Baldrick’s is, Carlos said “Seeing just how many people are actively involved with trying to help kids with cancer. From the grassroots head-shaving fundraisers to the incredibly talented and compassionate physician-scientists on the front lines of this fight, it is an impressive and inspiring community.” 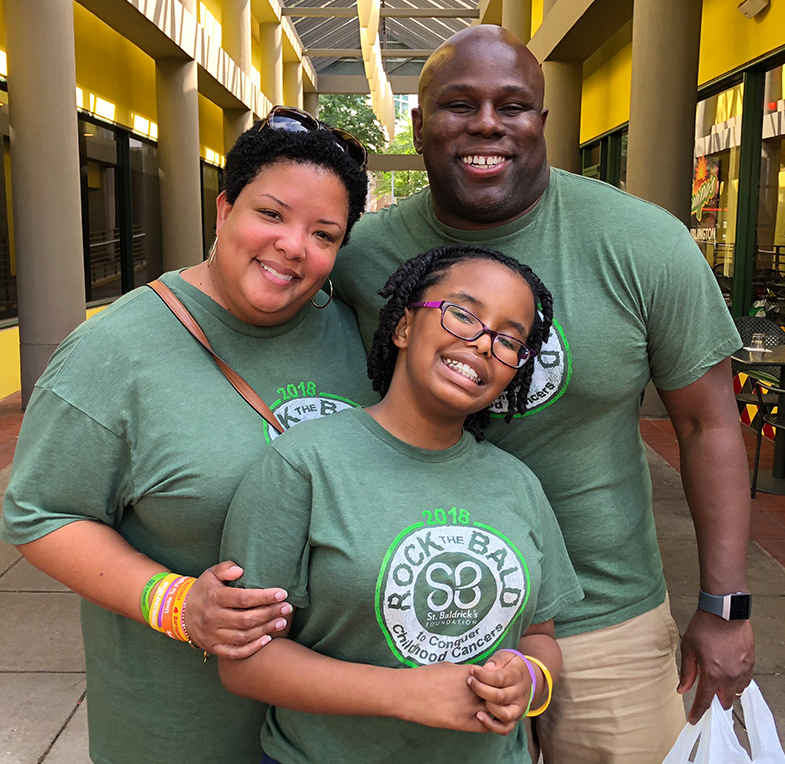 In 2017, immediately after attending a head-shaving event, the Alexander Family created an Honored Kid page for their daughter, Julia, a brain cancer survivor. The following year, Julia was asked to serve as a 2018 St. Baldrick’s Ambassador which truly began their journey as advocates. They wanted to support a Foundation whose core mission is funding research that will lead to a cure and felt St. Baldrick’s commitment to this mission is clear. Through their involvement, they’ve attended action days and met many other pediatric cancer moms and dads who have made a profound impression on them. Most recently, Mrs. Alexander joined the 46 Mommas group for their 10th annual shave event and advocacy day in Washington, D.C., and feels that she is now part of a very special sisterhood.

When asked why they continue to stay involved, the Alexanders said, “We sincerely believe that every minute we spend involved with this organization helps kids like our baby girl and will one day lead to a cure for childhood cancer.” 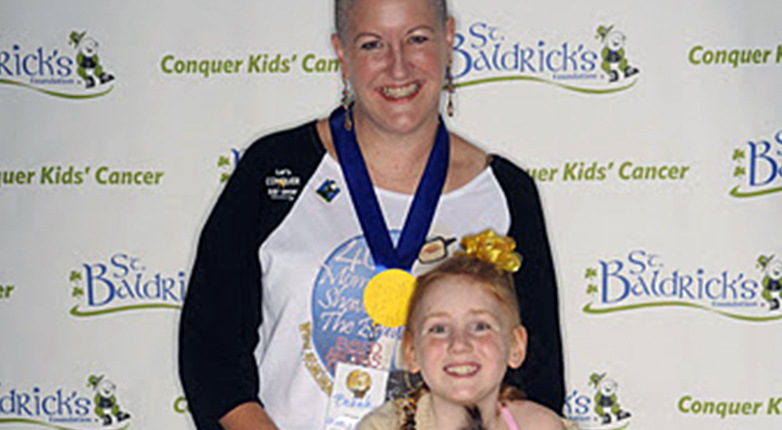 In 2009, two years after her daughter Grace was diagnosed with brain cancer, Rebekah helped create the inaugural team of the 46 Mommas and shaved her head for the first time. She says, “We set an aggressive fundraising goal of $1 million. We passed that goal in 2013 at our fourth annual event and went on to double it by 2017.”

As a leader of the 46 Mommas, Rebekah has served in nearly every role when it comes to head-shaving events. She remains a tireless advocate for kids with cancer by using every opportunity to promote increased funding for better treatment options and cures. She started a Hero Fund in Grace’s name (Grace for Good) 10 years ago which has raised over $165,000 to-date. Grace, a 2014 St. Baldrick’s Ambassador, is now 18 and contemplating college. She enjoys volunteering with her mom to help other kids with cancer. Rebekah shares, “Grace and I are thankful…for the ongoing generosity of our family and friends who have shared her story and supported our efforts. Together we are making a difference.”

Rebekah loves being able to connect with other parents and is grateful she can offer hope with Grace’s story while also advocating for necessary change. Her favorite part of her St. Baldrick’s experience has been the people, “friends old and new — who have come together for the cause. Our U.S. Senator, Jack Reed, himself a champion for childhood cancer research, is one such person. His recent invitation for me to be his guest at The State of the Union, was a great honor. I am inspired to continue my advocacy and keep doing Good for kids.”

Thank you to all of our volunteers (we know they all deserve to win!) and thank you for taking the time to vote for the person you would like to see take home a “2020 Volunteer of the Year” award. Stay tuned! Awards will be announced during 2020 National Volunteer Week.

Feeling inspired? Click here to join become a 2020 Virtual Shavee or check out all the ways you can get involved to help kids with cancer. If you have any questions, please contact shaveehelp@stbaldricks.org.