Editor’s Note: Throughout the month of June, Cancer Survivors Month, we are hearing from and about those who have been diagnosed with pediatric cancers, and learning about the long-term impact and late effects of cancer treatments. The month of June also marks four years since the focus of this blog post, Brooke, was first diagnosed. 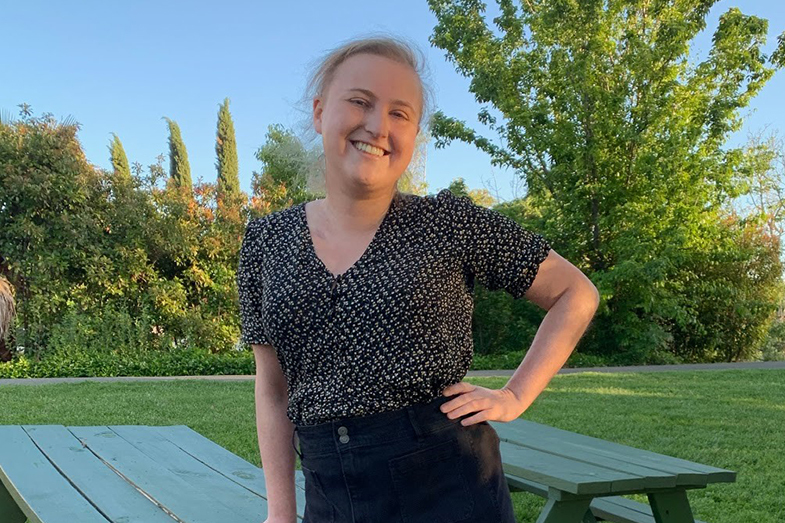 “My name is Brooke. I like sushi, road trips, reality TV, biology, unsweetened iced tea, and cold beaches. I am 23 and sometimes I go to Stanford – I was originally part of the Class of 2017, but then…

I was diagnosed with high-risk (Philadelphia positive) acute myeloid leukemia (AML) on June 18, 2015 (4 years ago this month) at age 19.”

Brooke is raw, open, direct, and is unafraid of sharing photos of some of the scars she ends up with, and the realities that surviving cancer might not mean being anywhere close to in the clear. Here’s an excerpt from a recent blog post titled “Crying at Yoga”:

“The closer I am to death, the easier it is to write. It’s not really about me after all – it’s about what is happening to me. My skin turning to stone, my nerve endings screaming, my mouth and hands and feet rubbing raw, my kidneys failing, my lung function declining, my eyes burning…none of that tells you anything about me. You don’t know anything about me from what I just typed other than that I’ve been through some really bad [STUFF].”

Recovery is No Picnic

After her diagnosis, Brooke ended up receiving a bone marrow transplant from her brother. That began another set of survivorship issues – some of which were life-threatening for Brooke:

The Trauma – Brooke Knows it All Too Well

Brooke doesn’t pull any punches in her blog. Here’s one reflection she wrote on some of the pain she’s endured:

“The further I get into this, the more I try to protect myself from trauma. I no longer believe that surviving a catastrophe like organ failure is the end of it. I think back to times in my treatment where I was most scared, in pain, suffering – and realize that those moments are traumatic in permanent ways.

There are a few that stick out – when I had my ovary removed after my first round of chemotherapy and was not given adequate pain meds at discharge (I basically screamed in pain for 3 days but didn’t know I should ask for more, thought it was normal), when I found out my first round of chemo didn’t work, when the central line spilled into my lungs and I thought I was going to die that minute and ended up in the ICU, when I couldn’t eat or drink anything for 3 months, when the scleroderma hit, when I went into kidney failure and again couldn’t breathe because of fluid filling my lungs, when they put a dialysis catheter in my chest while I was awake.

There are smaller traumas – smells, sounds, daily reminders covering my body inside and out. But those acute moments of trauma – they never leave.”

But … What About Stanford?

2018 was a really rough year for Brooke, and here’s how she reacted to turning the page:

“So here I am in January 2019. I am truly stunned that I survived 2018. I really, really thought I was going to die – the scleroderma progressed so quickly and so severely. I couldn’t breathe (under 50% lung function), couldn’t eat (skin was so tight my stomach couldn’t expand and I would spit up basically), was so so itchy that there aren’t even words for it. The fatigue was immense. The brain fog was unbelievable – I could hardly finish a sentence. The central line was horrific – the dressing rubbed my skin raw and changing them involved scrubbing them with what felt like fire. It was a daily trauma in the same way the gut GVHD/forced thirst was in 2015.”

But there was a silver lining:

“Last quarter, I won a dean’s award. It meant so, so much to me to be recognized for my research. I have often felt inadequate in school – school relies on consistency, the opposite of what I can do as a chronically ill person. So, to be recognized as outstanding was shocking. It showed me that there are people who see past my attendance or needing extensions and instead are able to see the quality of my work. To have a professor go out of their way to nominate me for an academic award was so meaningful.”

It may have taken her six years to graduate as opposed to the usual four, but she has stuck with her studies (at a competitive school, no less). She managed to excel outside of the classroom, conducting research at Stanford Cancer Center and Memorial Sloan Kettering Cancer Center; the Sloan Kettering research earned her a co-authorship in the NIH Journal. And she’s quite the creative writer, too – as evidenced by her blog and her list of published articles.

Why Brooke Wants to Help Other Survivors

The next chapter for Brooke starts during Cancer Survivors Month, as her graduation on June 16th marks the end of her time at Stanford. One of her academic highlights was being one of six students to earn the annual Dean’s List honors.

She told us, though, that she has learned plenty both in and out of the classroom – and that has helped shape her and called her into a medical career.

“When I was laying in my hospital bed all of those days, especially soon after my transplant, residents were working all hours of the night. They were exhausted. And sometimes I thought – they must want to lie down once in a while. I vowed to never wish to be in that bed again no matter how tired. As a future medical student and eventual doctor (sooo weird and cool to write that), I will be tired. Right now, I’m really tired. But I try to remember laying in that bed and how much I dreamed of this life. I have more hope than I have had in years. This is a long, slow journey and I have stopped setting dates and goals. I thought that by now I’d be off prednisone, that my body wouldn’t still be covered in scleroderma, that I’d feel stronger and healthier. But I am where I am, and right now that means crying at yoga and worrying about deadlines while I have fevers. The take home message is that I have continued to improve in such a dependable way that I am actually considering trusting it.”

Helping through a St. Baldrick’s Hero Fund is something Brooke feels passionately about, and her fund, which is focused on young adult survivorship issues faced by those with GVHD, has raised more than $13,000 to date. These funds will, according to Brooke, try to “understand the mechanisms behind GVHD” because, as she says, “kids deserve more than surviving. We deserve to thrive.”