Brooke Survives Cancer, Graduates Stanford – But Not Without A Lifetime’s Worth of Challenges

Editor’s Note: Brooke is an Ambassador and Honored Kid who just graduated from Stanford University. As Cancer Survivors Month continues on the St. Baldrick’s Blog, we’re letting her tell the story of how she got to this day in her own words.

On Thursday, September 24, 2015, my friends were finishing up their first week of junior year at Stanford. I was lying in a hospital bed, watching as my brother’s stem cells were infused into my body, replacing the bone marrow that had turned against me.

On Friday, September 25, my friends celebrated their first weekend back together at school. I had a grand mal seizure.

When I was diagnosed with acute myeloid leukemia at the end of my sophomore year of college, I knew that I was going to have a very different college experience from my peers. I had no idea how different it would be.

I had the impression that I would either die or I would live and return to my previous life. I had a high-risk form of leukemia that did not respond to my first round of chemotherapy, and at first it seemed that the death option was more likely.

But when I got into remission on a salvage round of chemotherapy and proceeded to my bone marrow transplant, I was hopeful that a return to “normal life” was possible. 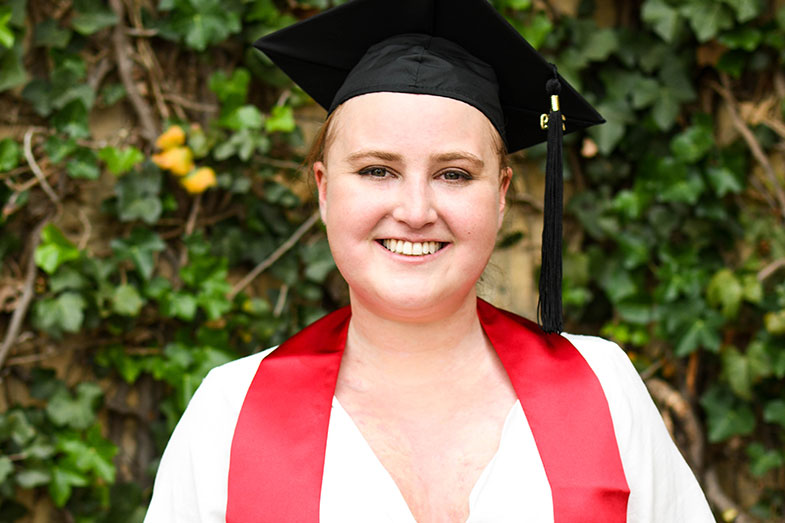 Back to School – With a New Set of Issues to Face

15 months after my transplant, in January 2017, I returned to school. I was originally supposed to graduate in 2017 and returning in time to overlap with my class one more time was important to me.

I was fragile, but I was completely off immune suppression and thought that the worst of it – which had been pretty bad, including grade 4 gut GVHD (Graft Vs. Host Disease) – was behind me.

Unfortunately, it was not.

In the fall of 2017, after 9 months of relative health, I developed severe chronic GVHD, the worst of which manifested as scleroderma (skin tightening) on over 90% of my body. I could not breathe because my chest couldn’t expand. I could not eat because my abdomen had no space. Within four weeks, I could not turn my head, dress myself, or make my bed.

During this time, I told a friend I was having a hard time that quarter, then laughed at the absurdity of my “hard time” being that I had a potentially fatal illness that was progressing quickly and not responding to medication. Severe illness has a way of messing with your perspective. One month later I went into acute renal failure and found myself listening to an ICU doctor scream orders because there was no time to waste. I watched as a portable chest x-ray illuminated a pure white image of my lungs, which meant they were full of fluid. I wrestled with bi-pap and worried that I would be intubated for the second time in my life. As my creatinine climbed, I struggled to remember my own name. My peers were taking their finals.

After the acute renal failure, I took a second leave of absence from school. This leave was even worse than the first as I struggled with scleroderma and GVHD in my eyes, gut, and liver.

I returned to school for the second time nine months later, in the fall of 2018, for my last academic year. This past year, I have often felt like I am living a life separate from my peers, as if I’m watching a movie and they are all characters that don’t seem quite real. I live one block from the dorm I lived in freshman year.

I walk by it almost every day and wonder how I ever had a life so normal.

Going to college with chronic GVHD has been hard. There is no sugarcoating it. When I went back to school in September, I was still on 30 mg of steroids. Every two weeks I would take two days off school to have two large pheresis needles stuck into my upper arms so that I could spend 4-5 hours getting photopheresis to treat my GVHD. I took pills and made sure I had enough sleep, but after a year of being essentially bedbound, the hardest part of returning to school was juggling basic tasks. Making sure I fed myself, cleaned my apartment, and returned text messages was harder than I ever thought possible.

Every day I told myself to put one foot in front of the other, making it through each class, each meal, each homework assignment, each day. During my second quarter back, I tapered from 30 mg to 10 mg of steroids, the reduction in cortisol leading my body to desire nothing but sleep as I dragged myself to Cell Bio and Epidemiology.

I began to worry that while I am currently improving, I might never be free of chronic health issues.

I am a human biology major, so my classes often center on topics with which I have had unfortunate personal experience. This year, I listened in Global Child Health as my classmate asked why starving children’s bellies were distended. I knew the answer — Kwashiorkor, a lack of protein leading to fluid retention. I knew it because my own belly had swollen as my limbs became emaciated during the three-month period when my acute gut GVHD was so severe I was allowed nothing by mouth.

I took a class about tumor immunology and listened as the professor joked that bone marrow transplant patients are “fried” with radiation. I fought the urge to scream as he quickly glossed over GVHD as a downside of bone marrow transplants. In a class about the opioid epidemic, my classmates proposed stricter laws cracking down on pain medicine prescriptions. I saw the validity of their points but also remembered my 19-year-old self, who was in so much pain from undiagnosed leukemia and was not believed.

When I got to Stanford, I thought the hardest part would be my classes. I worried that I wasn’t smart enough to attend such an elite university or that I would not be able to get the grades needed to pursue my lifelong dream of being a doctor.

My illness taught me that medicine is about so much more than exam scores. My classes taught me that I am perfectly capable of pursuing my dream. I am often asked if I studied human biology or if I am attending medical school because I had cancer.

The answer is no.

I drew pictures of myself as a doctor when I was in third grade. I did research on stem cell transplants two years before I had a transplant of my own. It took me awhile to understand why the assumption that my goals are related to my illness bothered me so much. I described this to a person I hardly knew, and he said:

“So, they are taking that from you, too.”

I have lost so much of my identity to this illness, and the assumption that my interests are due to cancer yet again takes part of my identity away. I’m sure that most of my classmates from my original class of 2017 think of me first as the girl who got cancer. But I had dreams and an identity before cancer, which included biology and medicine. I pursued my dreams not because I had cancer, but because they are part of who I am.

Last night, as I listened to freshmen in the dorm where I once lived celebrate the end of the school year, I took my evening medications and pushed a needle into my leg to deliver IL2 (medicine to treat GVHD), something I have done for over 400 days now.

I wondered how our lives could be so similar but so different. In the end, going through cancer treatment and chronic GVHD while in college has led me to carve a life very different from the norm. It has taught me to be secure in doing what is best for me, even when that is very far from what I expected.

This is not an easy lesson, and I don’t feel that the good has come even close to outweighing the bad.

I have grieved the person I was, the future I had expected for myself, and the loss of my young adulthood to serious illness. There have been tears, anger, sadness, and several close brushes with death. Between those moments, I have been lucky to pursue an education that allowed me to be a student, not a patient, for brief periods of time.

Everyone is a different person between their freshman and senior year of college.

But for me, that difference has involved entirely new DNA coursing through my veins courtesy of a bone marrow transplant.

It has involved over 300 days in the hospital, facing my mortality, asking questions like

“Even if I do make it through this, is this suffering worth it?”

Right now, I don’t have those answers. What I do have is a future, and I hope that graduating from college is just the beginning.

Please donate to the St. Baldrick’s Foundation – and fund research that will help survivors like Brooke lead happy, healthy, and productive lives.