Members of the Boston Cannons lacrosse team will be shaving their heads for children’s cancer research on August 9 and competing to see who can raise the most money. Donate to their efforts or sign up to shave your head with them! 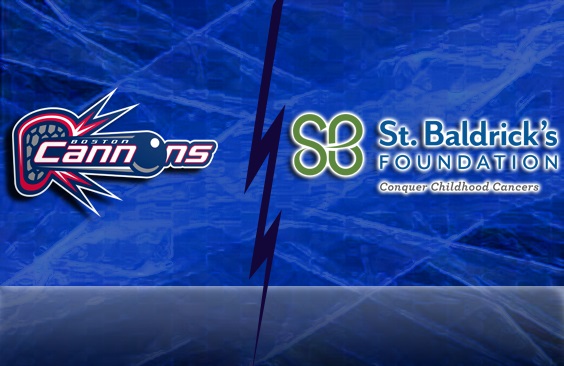 One Major League Lacrosse (MLL) team is about to face their toughest opponent yet. It’s not their longtime rivals in the league. It’s not grueling practices in the midday summer heat. It’s childhood cancer.

From June 21 through August 9, the Boston Cannons are taking the fight to childhood cancer with a fundraiser for the St. Baldrick’s Foundation.

Team members Jack Reid, Matt Smalley, Jordan Burke, Brodie Merrill, Eric Hagarty, and head coach John Tucker will be shaving their heads in front of their fans at the August 9 home game. Until then, these six members are competing to see who can raise the most money, with the team as a whole looking to raise $5,000 for children’s cancer research.

“My teammates and I are excited to officially kick off this head-to-head challenge,” said Reid, a defenseman for the team. “All of us have been impacted by cancer in some way, and Matt is a cancer survivor himself.”

Their St. Baldrick’s head-shaving event will take place at Harvard Stadium in honor of Clarkie C., an 11-year-old Cannons fan who completed treatment for Ewing sarcoma in May. Clarkie served as the team’s honorary captain for the fundraiser’s kickoff during the June 21 game and will be captain once again on August 9.

“Turning their on-field camaraderie into a friendly competition to help kids shows what big hearts these men have,” said Kathleen Ruddy, chief executive officer of the St. Baldrick’s Foundation.

Beyond raising money for children’s cancer research, the Boston Cannons are offering a little extra something for the fans. The first 100 people registered to shave their heads and raise at least $50 will receive two free tickets to the August 9 game against the Rochester Rattlers.

But that’s not all. The six who raise the most money will be invited to shave the players’ heads after the game. This means it could be you on the field, shaving off those locks in front of countless fans in the name of childhood cancer research.

“We believe no child should have to endure the painful treatments that come with a cancer diagnosis, and hope this challenge will not only raise funds for St. Baldrick’s, but will call attention to the critical need for funding childhood cancer research and encourage others to get involved,” said Reid.

The fight against cancer won’t end on the field. In the time that it takes to play one MLL game, 40 children across the world will be diagnosed with cancer.

Donate to their Fundraiser

Learn more about fundraisers making a difference for kids with cancer: