A Doctor Zeroes in on ‘Precursor Cells’ in Pediatric Cancer

Dr. Sam Behjati is a highly respected expert, based in the UK, who is doing cutting-edge pediatric cancer research. He’s the first-ever recipient of the Robert J. Arceci International Innovation Award from St. Baldrick’s, having received the grant in 2016. And he’s been laser-focused on finding the developmental origins of childhood cancers, including cells that might predict cancer in children, specifically in the kidneys.

But, in a recent interview to share his findings for the first time since winning the award, a surprising word came up a few times from Dr. Behjati: “wacko.”

“What the award has done is completely liberated me, to take a plausible idea and come up with the experiment and have the ability to stick out my neck and take a chance with wacko research.” 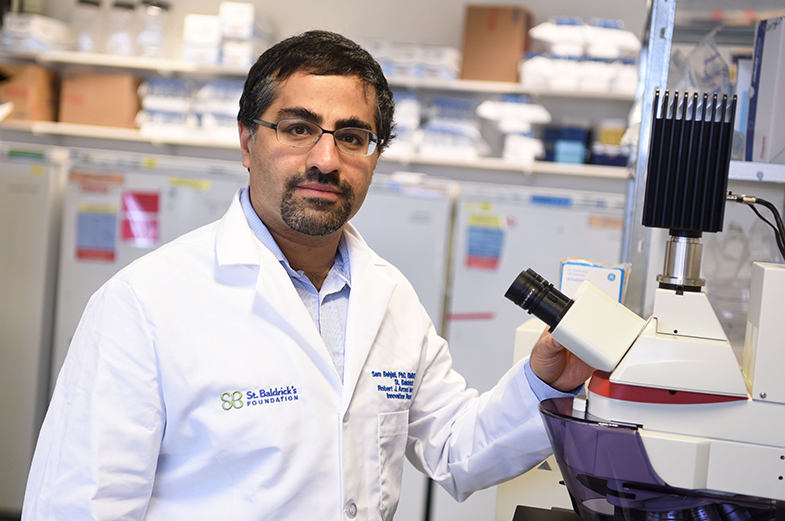 A Potential Breakthrough in Wilms Tumor

Dr. Behjati — who leads pediatric cancer research at the Wellcome Sanger Institute in the U.K. — and his colleagues zeroed in on Wilms tumor, which is the most common type of kidney cancer in children, with around 500 cases diagnosed annually. The thinking behind this particular “wacko” research — as published in the journal Science in December — is that Wilms gives doctors the opportunity to find precursor cells, or those that may act in Wilms in a similar way to moles in adults that become melanoma.

This study is the first to compare healthy kidney tissue with Wilms tumor tissue, with the researchers using comparative genome analysis to figure out what causes the disease. Doctors homed in on a specific “rogue cell” that appears normal in both cancerous and non-cancerous tissue, but suppresses the H19 gene, which is meant to ensure the healthy growth of cells. With this gene turned off, cancer cells can grow uninhibited.

Dr. Behjati explains it like this: “As cells divide, they acquire mutations, so we sought to know the ‘post code’ — to find out where does it come from and to sequence that post code. At the root of the tumor is a patch that looks normal genetically. But since it’s pre-cancer, the DNA changes.”

Dr. Behjati continued: “In adult cancers, you have polyps in the colon that can be a precursor to bowel cancer. But, these types of pre-cursor cells are not seen in children, which is what makes this study groundbreaking.” The focus on Wilms tumor was also the least controversial because of its “embryology,” with most medical professionals in the field agreeing that the conditions leading to its growth are developed in the womb.

The Advantage of an Arceci Innovation Award

When the Robert J. Arceci Innovation Awards were created, the goal was to give doctors the freedom and flexibility to think outside the box – to explore avenues that may have been left unexplored otherwise. The grants are unrestricted, making them unique in cancer research. Dr. Behjati says, “What the award has done is completely liberated me, to take a plausible idea and come up with the experiment and have the ability to stick out my neck and take a chance with ‘wacko’ research.”

“The Arceci Award has provided a stamp of approval, and I want to share a huge thank you to the St. Baldrick’s Foundation for giving me this opportunity. I have had an absolute blast doing the research for the past three years. And my colleagues have as well.”

Freedom to take innovative ideas and take the time to work with a team of researchers to study whether those ideas have merit is one of the hallmarks of the Arceci Award. Work like Dr. Behjati’s team has done with Wilms tumor would not have been possible without the help of St. Baldrick’s supporters, fund-raisers, and donors throughout the world.

And, for Dr. Behjati, it really is about the children. “I’m blown away by the resilience of the kids and their families. When my baby (under a year) had an ear infection, we felt like our worlds were turned upside down — so it is humbling to see families deal with the upheaval of a cancer diagnosis.”

His work, and the work of doctors like him, will continue in the quest to #DFYchildhoodCancers, thanks to supporters of the St. Baldrick’s Foundation.