Editor’s Note: Today on the St. Baldrick’s blog, we’ve decided to hand the microphone over to Dan Butler, whose son, Sullivan, was diagnosed with cancer in 2016, at the age of 10. June is Cancer Survivors Month at St. Baldrick’s, and the first Father’s Day after Sullivan’s diagnosis and treatment was especially meaningful for Dan. 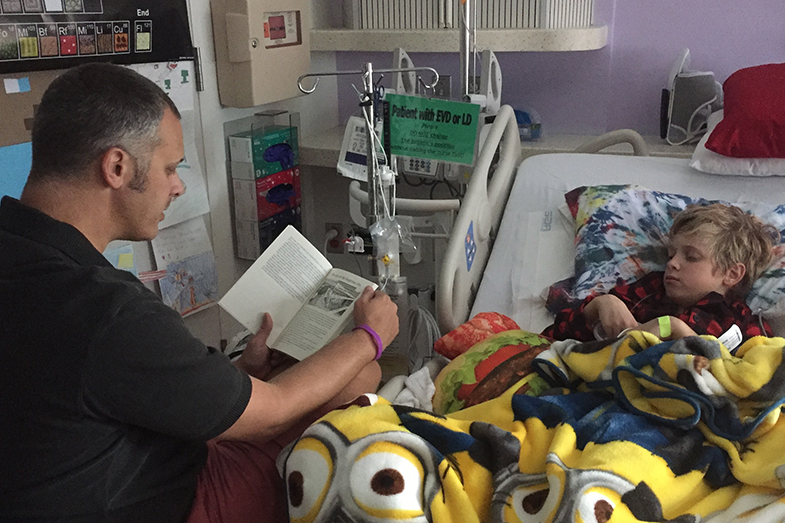 I will never forget Father’s Day 2017. My son Sullivan had finished treatment for medulloblastoma, a brain tumor that had spread to his spine. While he was still sick, we were thankful to be out of the hospital. Sully shuffled behind his walker to the edge of our pool. He snapped a pair of goggles over his bald head and slid into the water. I watched him and his brothers, Cash and Finn, wrestle to get on top of a pool float. It was the first quality time we’d spent as a family since our lives were forever changed by pediatric cancer.

Before his diagnosis, well, Sullivan did typical kid things – competing on swim team, chasing lizards in the backyard, riding bikes with friends and wrestling with his younger brothers. In 2016, Sully complained of back pain and we told him to take it easy. That was week one of pain.

Over the next several weeks, we engaged in the typical parent-with-sick-child troubleshooting

Stop wrestling with your brothers

Don’t jump on the trampoline

Lay on the heating pad

When a Routine ER Visit Turns Into a Cancer Diagnosis

The pain seemed to come and go. It wasn’t particularly concerning to any of the doctors we saw. One morning I took him to the local ER, as it would be faster than seeing the pediatrician. Sullivan and I walked into the ER on November 9, 2016. He didn’t walk again for a year.

When the ER doctor motioned me into the hallway, Sullivan joined the ranks of 300,000 kids worldwide, whose families are forever changed by a diagnosis of pediatric cancer each year. Pediatric cancer strikes without consideration for health, wealth, age, sex, race, or any other factors that we use to distance ourselves from catastrophic events.

Cancer? Not my kid. And it won’t be your kid. Unless it is.

My body felt electric and my heart was pounding in my ears. My stomach tightened and I had tunnel vision. The adrenaline that creates a fight-or-flight response was pouring through me as we rode by ambulance to our children’s hospital. Medicine is about managing risk, and there are few things riskier than cutting into a child’s brain. But the unrelenting pressure on Sully’s brain had turned into a race against the clock, so the surgeons would do the best they could.

This form authorizes us to perform surgery

This acknowledges you have been informed about potential complication.

This is a consent for anesthesia

The problems may last a short while

This is a blood transfusion consent form

Or they may not go away

This authorizes us to release tumor tissue for testing

The surgery will take about 6 hours

We’ll try to keep you updated

Are you parked in the garage, or did you valet?

All we could do was wait and it would be several hours until Sullivan’s skull was put back together and his doctors began to bring him out of his sleep. When I saw him in recovery, my heart stopped. He was covered in monitors, bandages, tubes and wires. How much of my son was still there? Of all the terrible complications we were warned about, which did he have, and how bad would it be? His mom and I sat at the edge of the bed; thankful he was alive.

It soon became clear that something was seriously wrong. Sullivan’s left side was weak. He was seeing double. His speech was painfully slow. His legs dangled uselessly off the bed. He couldn’t stand or walk. His symptoms were consistent with posterior fossa syndrome, which occurs in about a third of kids with medulloblastoma.

Our son was saved, but this was our first brush with the reality of pediatric cancer treatments. The state-of-the-art treatment given to Sullivan by world-class physicians at one of the top children’s cancer hospitals had damaged him.