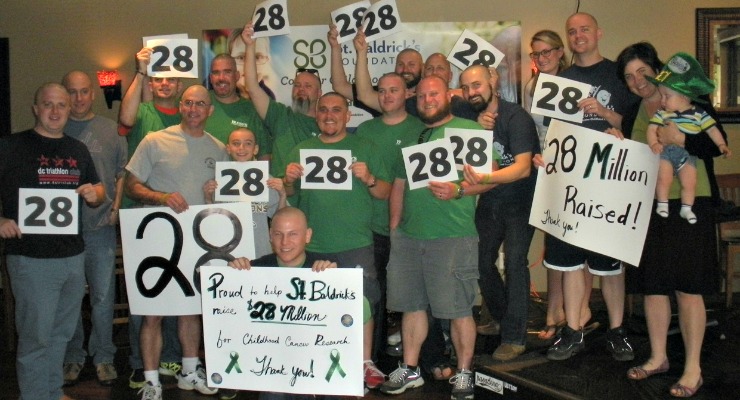 The amazing group of volunteers and shavees at the Tortoise and Hare event in Arlington, Virginia, are very excited to help us announce this next million dollar milestone! Our friends hosted their St. Baldrick’s event this past weekend and raised more than $25,000 for pediatric oncology research!

The event was held in honor of St. Baldrick’s Honored Kid, Mason, who passed away from medulloblastoma, a type of childhood cancer, in October 2007. His mother, Danielle, an avid supporter and St. Baldrick’s shavee, served as the event’s guest speaker and was there to cheer on the 25 volunteers who shaved in solidarity with all kids who have been affected by cancer.

Shavees included a father and son team who have been shaving together for the past six years, two women with waist-length hair, a team of two students – one of whom was the top fundraiser for the event – and seven participants whose team, Bugsy’s for Baldrick’s, raised more than $7,000, along with many other local volunteers.
Jonathan Bruck, Volunteer Event Organizer for the Tortoise and Hare event, says:

“It’s a tremendous honor for me and everyone involved to help St. Baldrick’s reach this milestone of $28 million raised in 2013! Our event is comprised of not only shavees who participate year after year, but also local businesses that offer donations, volunteers willing to help during the events, and the people that attend and cheer on those who believe in helping others and can’t do it by themselves. It takes a village…BE BRAVE, GO BALD!”

Jonathan also sends out a special thanks to Gossip on 23rd and Washington Kastles, saying, “It’s because of support from local business like these two that we are able to continue our event and raise funds for children’s cancer research.”

Join the thousands who have gone bald this year to support lifesaving research for children with cancer. Get involved today!